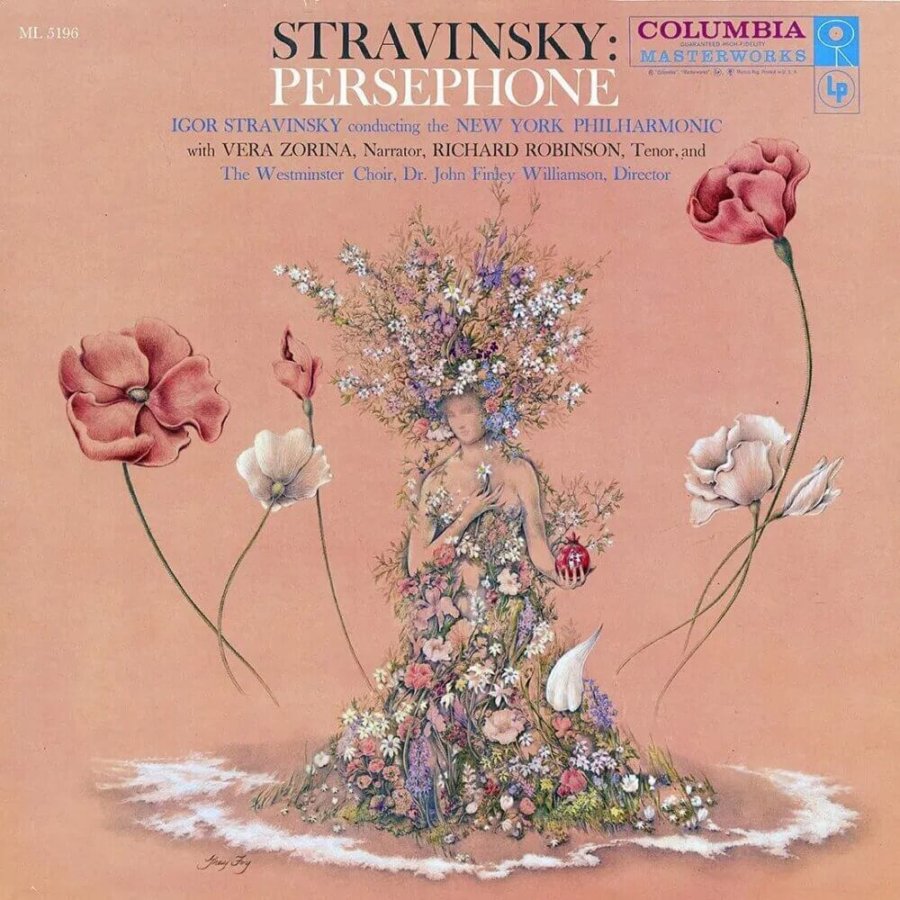 One of my favorite musical works about spring is by Igor Stravinsky, but it’s not the one you would expect—the wild and primal Rite of Spring. Rather it’s his stage piece Perséphone, set to words by the French poet André Gide and retelling through song, ballet, and spoken narration the Greek myth explaining the origin of the season. Styled by the composer a mélodrame (a theater piece combining music and spoken dialogue) it was premiered on April 30, 1934 at the Paris Opera.

It follows the original myth as told by Homer—albeit with a crucial twist. Persephone, the daughter of Zeus and Demeter, is abducted by Pluto while gathering flowers in a field and brought to Hades to be his bride. There she eats the seeds of a golden pomegranate, which obligates her to stay with her captor in the underworld for four months of the year while returning to her earthly family for the rest of the year (hence the yearly succession of winter and spring).

But Stravinsky and Gide did something quite surprising and wonderful in their adaptation. In Gide’s version of the story, Persephone descends to Hades of her own free will, out of compassion for the suffering souls there. She becomes a prototype of Christ, and the Christian paschal mystery is superimposed on the pagan myth. The piece ends with these words:

If Spring is to be reborn
The seed must die
Beneath the ground, to reappear
As a golden harvest in years to come.

Unless a grain of wheat falls into the earth and dies, it remains alone; but if it dies, it bears much fruit. (John 12:24)

The idea that the myths of antiquity foreshadowed the truths of Christianity is not new; C.S. Lewis insisted on it time and again. “The story of Christ is simply a true myth,” he wrote, with the implication that the myths were the shadows, and Christianity the reality.

In Perséphone we have a daughter of the gods who—much like the Son of God in Christian belief—leaves her heavenly abode and descends to the netherworld to bring life and light to a “people without hope.” There the Shades lead a dreary, circular, purposeless existence, drawing water from a spring that perpetually eludes their grasp. Persephone is filled with a desire to relieve these souls from their distress.

Tasting a pomegranate, Persephone is startled into a recollection of “the land I have lost,” her earthly home. She determines to return to her Paradise, which has been suffering winter ever since her absence (“All nature seems to lie groaning”).

The final part of the piece is entitled Perséphone renaissante (Persephone Reborn). The heroine rises from the underworld through a tomb and is greeted by a chorus of nymphs and children, with roses sprouting around her feet. Yet Persephone feels compelled to return to the underworld for part of the year and bring the spring to the suffering souls there:

“Do you believe a heart drunk with love / Could gaze on the wretched Hadean chasm /
And still emerge unscathed?… I do not need orders, I go of my own free will.
It is not law, but love, that is my guide. And step by step I descend the flight
That leads to the very pit of human distress.”

Her companions rally around her mission:

“Your lot it is to bring the shades A little of the light of day, Respite
from their countless ills, And love in their distress.”

Presiding over the entire work is a priest-like character named Eumolpus, a tenor who introduces the various scenes, singing in long lyrical phrases. The action is simultaneously narrated, danced, and mimed—a multi-tiered presentation that gives the work something of a ritual character. The orchestra is rarely used in full force, more often in delicate chamber combinations; softer dynamics predominate. The chorus has an important role to play, portraying the nymphs and other companions of Persephone.

Stravinsky enveloped Gide’s words in music of airy, mysterious beauty. Perséphone represents his neoclassical style in its most pure and chaste form, with diatonic “white note” harmonies spiced by piquant touches of dissonance. Its serenity is worlds apart from the tumultuous Dionysian frenzy of his ballet The Rite of Spring, which touched off a riot at its 1913 premiere. In the final scene when Persephone rises from the tomb, Stravinsky drew on the traditions of Russian Orthodox choral music for Easter to underline the renewal of spring.

Perséphone is a big piece—the longest work Stravinsky wrote, in fact, before his 1951 opera The Rake’s Progress. Yet it has curiously remained in the shadows of the Stravinsky canon (something sadly true of the composer’s neoclassical music in general). There have been some stagings on the West Coast in recent years—Michael Tilson Thomas did it memorably with the San Francisco Symphony—but revivals have been rare. There are unfortunately to date no video versions that do the work justice, although there are some excellent audio recordings, among them a 1955 performance led by Stravinsky himself.

The fact is that Perséphone is too subtle and refined for popular appeal, lacking the sensationalism of The Rite or the brash grandeur of Oedipus Rex (another of the composer’s Grecian monuments). It tells its vernal story in pastel colors, and its juxtaposition of singing, dance, and speech can be hard to perform convincingly and challenging for an audience to digest.

Yet the score’s aesthetic qualities—grace, delicacy, and a pastoral beauty that is not far from French Impressionism—will find a welcome response in many listeners. It is a kinder, gentler “rite of spring” from a composer who was fascinated by religious ritual and myth, both before and after his re-conversion to the Orthodox faith.

In place of the primitive savagery of The Rite, we find in Perséphone a paganism surmounted by Christian revelation, crowned by compassion and tenderness. Most scholars would take exception to the idea that Perséphone represented an advance in thought or sensibility over Stravinsky’s previous paean to spring. But speaking for myself, I know which of the two works I return to more often and with greater pleasure.

This was originally published with the same title in The Imaginative Conservative on May 10, 2019.

Michael De Sapio is a writer and classical musician from Alexandria, Virginia. He attended The Catholic University of America and The Peabody Conservatory of Music. He writes Great Books study guides for the educational online resource SuperSummary, and his essays on religious and aesthetic topics have been featured in Fanfare and Touchstone, among other publications.