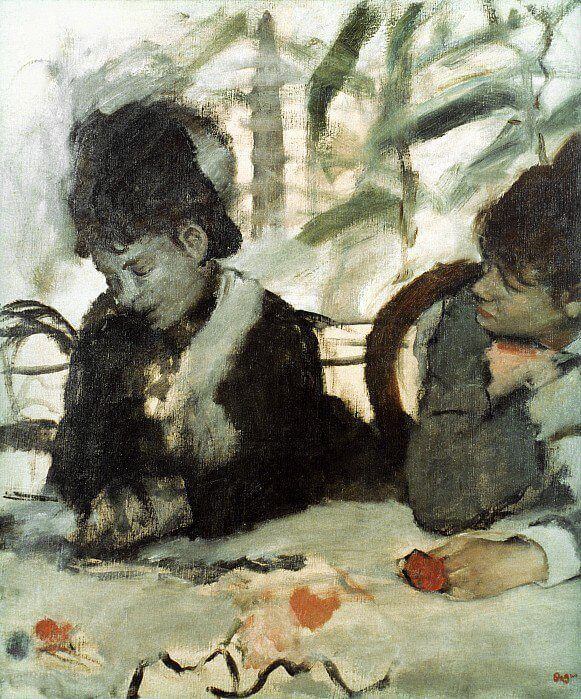 I have a woman friend who’s been in my life over long stretches of time, interrupted by sharp breaks in the friendship – one break from me and one from her.

Friendships have themes, I’ve noticed.  Our theme was set early:

How do you get to be both a woman and happy?  Or, more precisely, happy as a woman?

Together, we read de Beauvoire’s Second Sex in Paris, before the rest of the world caught up with her and, instinctively, both recoiled from that brave woman’s insistence that “the feminine” was wholly a social construct.

We were just at the springtime of discovering our lives as women.  To us, it seemed like finding a scroll secreted between the stones of an ancient wall — bearing detailed instructions on womanly life, writ with invisible ink.  If you could grasp that scroll, holding it up to your own lights, the writing would become visible.  So the script, though hidden and not officially recognized, had an objective character.  We did not consider it made up — a mere artifact.

Perhaps our friendship was most authentic back then.  At least, we both look back with nostalgia at that time in Paris.  Could it be that the reality of certain friendships is a thing only disclosed in a special context – though the friendship is indeed a true one?  Like music that can only sound right when played on a certain instrument?

Our first breakup coincided with the shattering of shared feminine hopes.  Her first husband was rather a brute, with whom she persisted in playing the role of loyal wife.  She didn’t know what else to do, where else to turn.  But I hated to see her in that role.  It was an artifact!

As for me, well, it’s one thing to reject the proffered hand of a suitor who was imprinting but unsuitable.  It was another thing when no subsequent hand was proffered, suitable or not!  No doubt my soul was elsewhere, and so did not invite courtship.  But at that time, a single woman in the field of philosophy was not regarded as a woman at all.

My friend persisted in a fiction.  I couldn’t find my way around a social fact.  We disillusioned each other!  It was I who broke it off.

We picked it up again, our feminine friendship, at a later point.  This time we remained friends for a longer stretch of adult life.  She found a devoted husband during this period and they stayed married.  I married too, though my first marriage did not last.  At any rate, we had concrete experiences and earthbound, womanly smarts to share, meanwhile not forgetting the idealizations that had marked our early time as friends.

When Jerry and I met, the improbable way we did, it was pretty obvious that we were going to be — for each other — both ideal and real.

This time, it was she who found a way to break with me.  When our friends marry, we can’t help but feel abandoned.  Since she had had a horrible mother, it was very easy for her to feel abandoned.  She claimed it was over political differences, but I felt that to have been the pretext, rather than the real roadblock.  Anyway, it hurt me and I never believed in that breakup, or accepted it.

Eventually, I found a way to connect again.  She was widowed by this time, but declined to be on the shelf, as a woman.  Our original theme, of how to be happy while a woman, had been interesting enough for us to want to see it still played out, on present instruments.

It was almost a restored friendship, except that, oddly, she never wanted to meet in person.  Our get-togethers were conducted behind telephones and email.  That was frustrating but better, I thought, than no friendship at all.

We come now to the present moment.  My woman friend, as I discovered without meaning to, equates Israel, the modern state, with Nazism.  A fashionable – if wildly inaccurate – view.

I’m a pretty persistent friend, but this is as close to deal-breaker as it gets for me.  At the same time, we’ve tried breaking off our friendship twice in the same lifetime, and it didn’t quite work.  So I’ll tell you how I’ve solved it, at least so far.

To begin with, I typed up a gap-free political history of The Land, for approximately the last 100 years.  Not every datum, but enough to signal that there were plenty more where those came from.

I didn’t send it.  I realized that it would break us up again.  And that my anger would be satisfied, but I’d be sorry.  What’s really going on between the two of us, here and now?  The question kept me up through most of the night.

Finally, here’s my surmise: She’s not wanted to see me since we reconciled.  There’s something contrived going on here, like a balloon that would deflate if punctured.  No gathering of data, no filled-in history, no personal close-ups, will have the slightest impact.  We are not engaged in an effort – quarrelsome but joint – to arrive at the truth.  She needs her narrative – much more than she needs anything I can say.

Instead of the gap-free political history, I wrote suggesting that we take Jews and Israel off the table.  She has yet to answer.

You take what you can get.

Abigail L. Rosenthal is Professor Emerita of Philosophy at Brooklyn College of CUNY. She is author of A Good Look at Evil (Revised edition: Wipf & Stock , 2018), Confessions of a Young Philosopher (forthcoming), and writes a weekly online column, "Dear Abbie: The Non-Advice Column" at www.dearabbie-nonadvice.com."