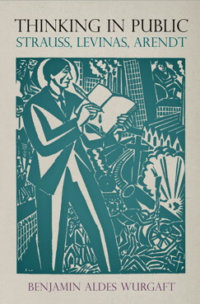 Thinking in Public examines what constitutes the public intellectual and the public role of philosophy by comparing three seminal figures of twentieth-century philosophy: Leo Strauss, Emmanuel Levinas, and Hannah Arendt. Each was a German-Jewish émigré and each was a student of Martin Heidegger, who had notoriously aligned himself with the Nazi Party. Although Strauss, Levinas, and Arendt adopted different approaches to philosophy, they all considered the political implications of their works. For these thinkers, the public intellectual was not an ideal to be emulated but provoked the question whether truth and politics could be harmonized.

The book consists of an introduction, three chapters on each thinker, and a comparison of them in the final two chapters. The introduction establishes the parameters of the study by focusing on how the idea of the public intellectual or the public provoked Strauss, Levinas, and Arendt in their thinking about the relationship between philosophy and politics. It is not a study of these thinkers as public intellectuals or an examination of public intellectuals generally. Because of their shared cultural and intellectual milieu, Strauss, Levinas, and Arendt provides an excellent opportunity to compare and contrast these thinkers’ thought about the place of philosophy’s in public life.

By looking at “the cultural logic that would invest such persons with moral authority,” Wurgaft shows how “the stories we tell about intellectuals are most useful when we read them as barometers of our political hopes and fears” (12-13). Whether it was Victorian moralists, Dreyfusards, or Intellektuelle, the public intellectual was someone possessing cultural expertise as opposed to scientific or technical ones. Heidegger was the foremost example of a public intellectual in Weimar Germany, although his own work not only disparaged the public but also believed that philosophy was to serve politics, particularly an irrational politics like National Socialism. Critical of progress, modernity, and Enlightenment philosophy, Heidegger’s philosophy had put him at odds with some of his Jewish counterparts (e.g., Ernst Cassirer, Hermann Cohen, Edmund Husserl); but for his students, like Strauss, Levinas, and Arendt, aspects of Heidegger’s philosophy would later be incorporated into their own thoughts while other parts rejected.

The first three chapters examine Strauss’ philosophy, its relationship to Heidegger, and its place in public life. Early in his career Strauss discovered a new understanding of the medieval philosophy of religion: the practice of exoteric writing for a nonphilosophical audience that defended philosophy according to the divine revealed law. For Strauss, politics and religion were the fundamentals of human existence: nature, not culture, defined human life. Strauss’ preoccupation with the pre-political world was similar to Heidegger’s own thought about “Being”; and both were suspicious of liberalism and believed answers to fundamental questions of existence could be found in Greek philosophy.

In “Persecution and the Art of Writing,” Strauss reiterated the theme of exoteric writing but this time directed against Weberian sociology of philosophy where social scientific research and government problem-solving replaced political argument; in Natural Right and History, Strauss examined the tension between the need of liberal democracies for public speech and the incapacity to express the truth; and in Hiero, or Tyrannicus, Strauss explored two contrasting ways of life: the political and the contemplative. Philosophy’s place in public life therefore was political but exoteric, educative, and persuasive. As mass public opinion became more important, philosophers needed to learn to adjust their teaching to a new and different type of audience. Philosophers also needed to defend liberal education in liberal democracies and teach elites the importance of natural right.

The next set of chapters explores the public dimensions of Levinas’ thought as a form of witnessing and the recovery of ethics back into philosophy. Abstract in character, Levinas’ philosophy eschewed concrete political engagements and thereby made it difficult to see how his ethical thought can be translated into politics. Wurgaft argues that the historical backdrop of the Dreyfus Affair and the experience of seeing his teacher, Heidegger, betray philosophy for tyranny, influenced Levinas’ understanding of philosophy as a disengaged activity, as a type of freedom from the world, in contrast to someone like Sartre who argued that philosophy was one of political engagement. For Levinas, philosophers could only act as witness of justice but only in a passive way to avoid substituting themselves for other people’s suffering and thereby making universal humanitarian demands. Although Levinas did not delve into the details of how witnessing transpires, his philosophy suggested that it is a particular encounter among people (the other) that was always specific, concrete, and localized.

The final set of chapters looks at Arendt’s philosophy and life where she was a public intellectual although she did not write a unifying account about the place of philosophy in public life. Her experience of Eichmann in Jerusalem taught her that to write in public was to risk misunderstanding, misrecognition, and condemnation; and her initial and continual interest in Augustine influenced her conception of philosophy as an inward, meditative activity rather than a public exercise. Arendt adopted a combination of philosophy, politics, and history in her works, such as The Origins of Totalitarianism and The Human Condition, to analyze contemporary problems in a multifaceted manner, unlike the Platonists and Catholics who relied solely on philosophy or the existentialists who had “retreated into history.” What was needed was a recovery of the political sphere where ideas and issues could be debated, discussed, and resolved.

Thinking in Public provides a fascinating and important study about what constitutes public intellectuals, publicness, and the public role of philosophy in the thought of Strauss, Arendt, and Levinas. The questions explored and the responses of these thinkers are not important for intellectual history but also relevant today with the rise of “thought leaders,” as Wurgaft points out: glorified technocrats who advertise rather than think about ideas to the public of liberal democracies. Instead of sycophants for the rich and well-connected, what we need today are individuals who can see past the gloss of the culture, politics, and education of our own day: to delve into the fundamental questions with which we all cope and formulate what they are and how we can respond to them. If you want to see how this was done, and how it could be done again, Thinking in Public is the book for you.

To Believe or Deceive? Sir Francis Bacon, Religion, and the New Science

Political Religion and the Death of God