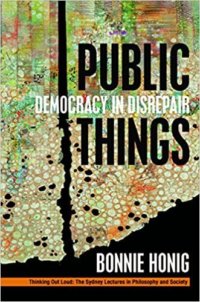 Public Things examines how public practices, space, and objects can form a collective identity in an age of privatization and deregulation. Although she does not define public things, Honig gives examples like public universities, prisons, national parks, roads, the military, government, electrical and power sources, libraries, and radio and television broadcast networks to illustrate what she means. Public things, whether privately or publicly owned, are institutions, practices, spaces, and objects that are shared by citizens and are necessary for democracy because they create opportunities and an environment that shape citizens into the collective identity of “a people.”

The book is composed of an introduction, three chapters that were based on lectures, and an epilogue. The first chapter examines the nature of public things and its relationship to democracy by looking at Wendy Brown’s Undoing the Demos where Brown argues that the market logic of neoliberalism has dominated the mindset of citizens in modern democracies. Honig agrees with Brown’s diagnosis but believes that resistance to neoliberalism is possible by public things where people can meet to protest and change politics (e.g., the Occupy Movement). Public things consequently are necessary for democracy because it provides the possibility for citizens to meet and contest the politics and policies of their government.

In chapter two Honig provides the theoretical underpinning of her account of public things by drawing upon the works of D.W. Winnicott and Hannah Arendt. Winnicott’s theory of object-relations shows how a child learns there is a world outside of him or herself when they encounter a “transitional object” like a blanket or a toy. Honig applies Winnicott’s theory to democracy by having public things (e.g., schools, parks, libraries) be the “transitional object” for citizens to move from their individual concerns to a collective identity.

Likewise, Honig’s applies Arendt’s concepts of labor, action, and work to democratic life. For Arendt, labor is the activity for human survival; action provides meaning and significance; and work is the creation of tools to control one’s environment. Work consequently bridges the gap between labor and action, providing the context necessary for human politics. The capacity to care or be concerned about political, collective enterprises is made only possible by the existence of public things to which citizens transition or create in their activity of work.

The third and final chapter compares two works, Jonathan Lear’s book Radical Hope and Lars von Tier’s film Melancholia. Both works engage with a community that faces the destruction of public things, with Radical Hope discussing the nineteenth-century Crow Native Americans facing annihilation by whites and Melancholia examining the end of the world caused by a direct collision of earth from another planet. The Crow adopted a strategy of “thinning” where they retained their public things (e.g., totems) and, although transformed by a new context, were still familiar them. By contrast, the characters in Melancholia adopted a strategy of “thickening” where they held onto their public things even in the face of imminent destruction. Of the two strategies, Honig is more critical of “thinning” because thinning public things risk accommodation and possibly collaboration with the forces that threaten citizens, whereas “thickening” reasserts the power of public things and its possibility to change politics and policies.

In the epilogue, Honig distinguishes between public things, shared spaces, and the idea of the commons. Public things are different from these other two categories because they set boundaries for common spaces as public and prevent the encroachment of private interests. Although public things can be used to promote evils, they can be repurposed if citizens’ relationship to them change. For example, Obama’s Secretary of Transportation Anthony Foxx sought to use the state to undo its past policies of racism. Public things therefore are not inherently good but they are required as a possible place for democracy and other activities to emerge.

While I agree with Honig’s account of public things and democracy’s need for them, I have three questions. The first is a Tocquevillian one: how would public things resist the growth of the administrative state combined with a tyranny of majority? If neoliberalism is a threat to our collective identity and public things, so likewise is the intrusive state that enters more and more into people’s private lives and clashes with their ideas about morality.

The second is a Heideggerian one: what does one make about technology, such as social media or the internet? Are they public things; and if so, is the theoretical lens of Arendt and Winnicott robust enough to explain it? Or is Heidegger–along with Marshall McLuhan and Neil Postman– right that our relationship to technology is somehow fundamentally new and different from previous objects?

These questions are less a criticism of the book and more of a hope that Honig will write a sequel. In our age of neoliberalism where the public has not only been dismantled but scorned, Public Things is a healthy antidote to make a case why things like public schools, spaces, and utilities matter for a healthy democracy. Public Things provides a defense of public institutions, practices, and spaces that transcend the utilitarian calculus of neoliberalism and paves way for a possibly different and more hopeful future.

From Big Bang to Big Mystery