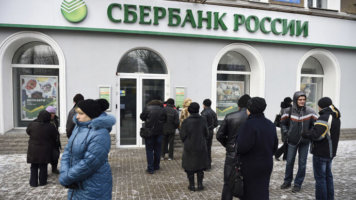 This week, the Trump Administration proposed a $14-billion cut in funding to USAID and other State Department programs designed to help struggling economies around the world. In response to a similar proposal last year, Secretary of Defense James Mattis told members of Congress at a National Security Advisory council meeting, “If you don’t fund the State Department fully, then I need to buy more ammunition ultimately.” This shift away from national defense solutions grounded in diplomacy will have a major impact on how the U.S. deals with nations in a state of conflict like Ukraine, whereas supporting a more stable and self-reliant Ukraine benefits the American people as well as the international community.

Before the fate of the foreign-aid budget is decided, Congress and the Trump Administration need to realize the opportunity before them to strengthen Ukraine’s economy and fight Russia’s grip on the country, by providing support to credit unions and therefore creating much-needed private sector financial services to the small family farms who toil in the rich black soil making Ukraine one of the most fertile places on Earth.

The agriculture business in Ukraine is the fastest growing sector of the economy and provides an opportunity for the nation to compete in the service-and manufacturing-oriented European economy. Since Ukrainian farmers have little access to financial markets, they have relied on small credit unions for funding. Over the past 10 years, small family farms have slowly accumulated 10 million of Ukraine’s 66 million acres of total cropland. Unfortunately, small farmers are unable to expand at a rate to make them profitable. Ukrainian law prohibits farmers from collateralizing their land, forcing them to use future crops or farm equipment to secure a loan. This has been a key issue for the International Monetary Fund, and $17.5 billion in bailout money has been tied to the passing of land reform legislation, which the Ukrainian parliament has yet to push through.

Prior to the 2009 financial crisis, Ukraine had 800 credit unions with 2.3 million members, totaling $1.2 billion in assets. The crisis caused Ukrainians to lose their jobs and made them unable to repay their loans, which resulted in half of the country’s credit unions folding. Moreover, the head of Ukrainian’s financial regulation has changed eight times, and the inconsistency of regulations and fees has stifled innovation and frustrated the country’s two credit union associations.

The credit union associations are a critical source of information for Ukrainian credit unions, offering technical, marketing and regulatory support. They provide a stabilization fund and act as a central bank for its members. Of the 400 credit unions operating throughout Ukraine, half are not affiliated with an association and 100 of them are in the eastern part of the country including Russia-controlled Crimea. Representatives from those credit unions are barred from traveling to the west, and reportedly Moscow has become the de-facto financial regulator of the separatist-controlled areas.

Credit unions face two significant barriers to building capital to fund farmers. First, unlike the U.S., credit union deposits are not insured, making it difficult for Ukrainians to trust their funds will be safe in the event of a bank run, which could be triggered by an economic downturn or external threats. Second, credit union business loans are illegal in Ukraine, forcing farmers to rely on personal loans with interest rates up to 20 percent. In fact, during the 2009 financial crisis, when the banks stopped lending, Ukrainian credit unions remained one of the few sources of lending to their members.

I was selected along with a group of American and Kenyan credit union representatives to participate in the Credit for Agriculture Producers (CAP) project last July, which is funded by USAID and implemented by the World Council of Credit Unions. The purpose of the project is to strengthen rural Ukrainian credit unions by improving the quality of financial services and products to farmers. A small project like CAP could have a significantly over-proportionate impact, and promoting credit-union growth with USAID funding will produce positive results for U.S. foreign policy in Ukraine.

Credit unions provide two immediate benefits to Ukraine’s young democracy, which has been slow to enact reforms. The most obvious is they provide financial services like business loans (with the help of USAID) essential to entrepreneurship and finance employment at a time of economic disruption when banks have withdrawn from these communities. Ukraine’s economy has turned a corner with a 40-percent decrease from its sky-high inflation from three years ago. Ukrainian credit unions are in a unique position to include more of the nation’s people in the economic recovery, especially if land reform is passed.

Second, unlike banks, credit unions are not-for-profit financial institutions creating grassroots democratic citizen participation, thereby encouraging a western-participatory society model. Credit unions provide a community-based economic opportunity for self-empowerment, pulling themselves up by their bootstraps rather than relying on old Eastern state structures and dependencies. The credit union structure goes in hand with the decentralization reforms the European Union has pushed the Ukrainian parliament to enact.

The major problem with U.S. legislation on this issue is credit unions are not specifically mentioned in the 2019 State Department appropriations bill. Unfortunately, the language directs the “USAID Administrator to consult with the Committee on Appropriations on cooperative development,” instead of credit union development. Credit unions are a specific type of cooperative, and the generalization could dilute future funding for projects like CAP. The CAP project is about engaging the U.S. constituency, citizen-volunteers from U.S. credit unions, like myself, who traveled to Ukraine to work with Ukrainian citizens to build grassroots financial sustainability.

The Senate Appropriations Committee already made a bold move last September by pulling back from Trump’s proposed cuts, but the fate of the entire foreign aid budget again falls back into the hands of Congress, needing formal approval from both chambers before heading to the president for his signature. Congressional leaders should again follow the committee’s push against Trump’s proposed unprecedented shift in foreign policy and reaffirm American leadership in Eastern Europe by fully funding programs like USAID and CAP and cleaning up the appropriations language to get the money into the right hands.

Last year, U.S. Army National Guard units from Oklahoma and New York started a six-month rotational deployment to Ukraine to provide training support for local government forces. Ukrainian military personnel have been engaged in combat with Russian-backed rebels since 2014. Americans ought to be fully supportive of Ukraine’s right to resist Russian encroachment. However, Americans should not neglect a more durable and balanced approach by engaging the matter at its core and providing financial and regulatory support to Ukrainian credit unions. By pursuing both objectives, we can help return an entire country’s economic future to the hands of those most interested in its success – the Ukrainian people.

Greg Dietrich is the Marketing & Community Development Coordinator at Frankenmuth Credit Union in Michigan. He manages a $4M grant from US Treasury that offers affordable mortgages to low income and credit challenged families as well as a small business loan that helps to combat federally designated food deserts. Greg has a Masters in Business Administration from Northwood University and a Bachelors in Political Science from Saginaw Valley State University.

The Language of Politics Today: Donald Trump, Racism, and Sexism