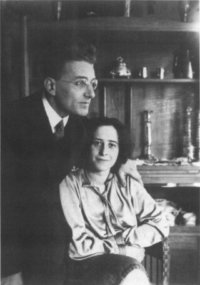 In 1925, Hannah Arendt was a nineteen-year-old philosophy student at the University of Marburg.  She kept a journal, one fragment of which is titled “Shadows.”  It traces two paths within her psyche, each productive of a different future, with the option to choose between them.  On the first path she would renounce masks and psychic armor even at the price of suffering.  She’d “learn patience and the simplicity and freedom of organic growth.”  In sharp contrast, the second path would be pervaded by a “strange, violently destructive desire for power” to which a “meaningless, baseless empty fear” would attach itself, whose “bland gaze turns everything into nothing.”  If she chose the second path, she would “pursue her life in idle experiments and a curiosity without rights or foundation.”

For students entering the world of philosophy, the motivator is often a teacher who models for them the life and the work.  For Arendt, that teacher was Martin Heidegger, possibly the dominant philosopher of the twentieth century and, in the estimation of Arendt herself in later years, the “secret king in the empire of thinking.” In February of 1925, Heidegger wrote asking to come to see her that evening and “speak to your heart. . . .  I will never be able to call you mine,” his letter said, “but from now on you will belong in my life and it shall grow with you.”  His letter did not merely invite her to a sexual adventure.  It tied her future to Heidegger’s growth.  So he had done what he could to capture the soul of a girl of nineteen.  It was a bit like trapping a rabbit and tagging it.  When Arendt’s The Human Condition appeared in German translation in 1960, its 54-year-old author wrote to Heidegger: “If things had ever worked out properly between us – and I mean between, that is, neither you nor me – I would have asked if I might dedicate it to you; it came directly out of the first … days and hence owes practically everything to you in every respect.”

The liaison continued (albeit with diminishing intensity and frequency from his side) until 1928, when Heidegger accepted the professorship at the University of Freiburg, succeeding Edmund Husserl, his mentor and benefactor.  In his new position, Heidegger seems to have made clear to Arendt, it would be difficult for him to continue their extra-marital affair. Her philosophic mentor and lover, who had seemed driven by nothing save his own genius and romantic destiny, now assumed the more commonplace features of a calculator of social and professional benefits and losses, with an all-too-ordinary indifference to her.

Arendt found a way to revisit her sufferings reflectively, in a medium that exercised her gifts and also helped her professionally.  In 1929, one year after Heidegger had put paid to their affair, she began a study of a woman she called “her closest friend, though she has been dead for some hundred years.”  Rahel Varnhagen: The Life of a Jewess is little known, but Arendt took it seriously enough to submit it, years later, as her Habilitation thesis in an eventually successful claim against the West German government.  Rahel was a celebrated eighteenth-century salon hostess with an astonishingly up-to-date understanding of herself in her world.  The brief hour of social glory she enjoyed was possible under Friedrich the Second of Prussia, when Germany seemed on the verge of joining an enlightened, cosmopolitan Europe.  During Rahel’s ascendency, she became engaged to a nobleman.  Having no platform in society, she could not muster the adroitness needed to turn courtship into marriage.  After Napoleon’s invasion, when the salons transformed themselves into exclusive patriotic social clubs, an isolated Rahel would find herself pouring tea for no one.  Arendt writes with empathy,  “Passion’s insistence upon absoluteness caused her capacity for novelty to perish, its organ to atrophy. . . . Her future would now be a prolongation of the past . . . ” By reliving Rahel’s losses, Arendt would get as good a purchase on her own losses as could be secured.  She could avoid the twin pitfalls of false bravado and premature renunciation of longings that were still acute.

In April of 1933, Heidegger became Rektor of the University of Freiburg.  He joined the Nazi party in May of ’33, ended university self-governance and terminated dissenting faculty and graduate students in October of that year.  Among the dismissal letters going out over Heidegger’s signature was the one to Edmund Husserl, removing his emeritus status and barring him from the university premises on account of his Jewish origin. For her former lover to dismiss the mentor and benefactor of his own philosophic career was a betrayal without precedent in the history of philosophy.  Heidegger showed himself a man without loyalty or (what is almost the same thing) without memory.  What could she be to him, if he lacked memory?

Arendt’s next steps were again exactly right.  She agreed to a proposal to collect the anti-semitic statements then flooding every sector of German society with a view to making them known abroad.  It took courage to do this and gave her, she said, “the feeling that something could be done after all.”  Inevitably she was arrested, but showed the mother-wit to conceal the name of the organization she worked for and make, she said, “friends with the official who arrested me” till he found a way to release her.  It was not in her power to make her arresting officer into a person who could help her, but she did what she could to notice and bring out that trait in him.

Next, as a refugee in Paris, she worked to facilitate the passage of Jewish children to Palestine, where they could find refuge in kibbutzim.  She could not roll back the tide of hatred that would sweep the Jewish children of Europe to their deaths, but she could help some of them to escape and survive. Meanwhile, on the womanly front, she recovered sufficiently to marry.  The man was Gunther Stern (later Gunther Anders), whom she had known as one of Heidegger’s former students.  She could not have known that this marriage would not last, but in 1940, after she had married her second husband, Heinrich Blucher, Anders helped her, her mother and Blucher to get three of the last 238 emergency visas to the United States, out of a waiting list of 300,000.  Evidently she had dealt with Anders in such a way as to leave room for that kind of gallantry, if he chose to exercise it. In New York after the war, she took on the assignment of tracking Jewish possessions stolen by the Nazis, returning them to their owners where feasible.  She could not have undone the history that included the Holocaust, but she worked to give back to survivors and heirs whatever things of value could still be restored.

When she returned on a visit to Germany, shortly after the war’s end, she was unmoved by the acrobatics of self-concealment in the perpetrators.  She understood their purpose: moral evasion.  “This apparent heartlessness,” she wrote, “sometimes covered over with cheap sentimentality, is only the most conspicuous outward symptom of a deep-rooted, stubborn, at times vicious refusal to face and come to terms with what really happened.”

Her essay, “What is Existential Philosophy,” written for the Partisan Review in 1946, shows the imprint of a brilliant young philosopher.  It is not a mere overview. She sees ideas as explosive in human history and is able to delineate their intellectual motivation with precision and ease.  Of Heidegger, she wrote that he “shows with reasonable consistency and despite all his obvious verbal tricks and sophistries, that Being in a Heideggerian sense is Nothing.”  She saw his metaphysical pyrotechnics as licensing Heidegger’s breakaway destructiveness.  “Since I cannot be a world-creating being, it could perhaps be my role to be a world-destroying being. . . . This is, in any case, the philosophical basis of modern nihilism . . . ”

In all these ways, she was following the first path traced in her youthful diary: the one of a natural unfolding in simplicity and freedom. But the second path was still open to her.  In February of 1950, she met him again.  As she wrote Heidegger the next day, “it was as if time suddenly stood still.”  Her impulse to see him ”mercifully saved me from committing the only really inexcusable act of infidelity and forfeiting my life.”  Here she was getting it backwards.  The betrayals had been Heidegger’s and the steps that would have led to the forfeiture of her life, Heidegger’s too.  With such inversions, their reunion began.

From the first, Heidegger set about to frame the conditions of their reunion.  In the letters that he wrote Arendt after the 1950 reconciliation, Heidegger dropped hints that reappear folded into her new theories of evil and forgiveness.  His “Everything is given to us anew” and “a new period of growth [is] beginning for us” becomes her “[F]orgiving does not merely react but acts anew … unconditioned by the act which provoked it … .”  Heidegger’s “I have neither experience nor talent in the political sphere” but “have learned to leave nothing out of thought” becomes Arendt’s explanation both for Adolf Eichmann’s role implementing the Holocaust and for what she came to call Heidegger’s Nazi “escapade.”  Nonthinking accounts for them both—prolonged and typical in the case of  Eichmann – in whom she found “total absence of thinking” — atypical for Heidegger whom she portrays as having quitted “the residence of thinking,” only briefly and temporarily.  Instead of holding Heidegger to account, she covered his trail.  In so doing, she obscured the difference between guilt and innocence, good and evil, victim and victimizer.

She went from truth to untruth.  Whereas in a prereunion essay on totalitarianism, the totalitarian regime “does not . . . at least to our limited knowledge, succeed in obliterating the love of freedom from the hearts of men,” in her 1968 Origins of Totalitarianism she makes the much stronger claim about its victims that “Nothing then remains but ghastly marionettes . . . ” Whereas in 1946, she was undeceived by the widespread moral evasions displayed by the Germans she met, in the 1958 Human Condition, she decides that radical evil involves “rare outbursts … about whose nature so little is known … .”   In 1958, she dwells at length on forgiveness because, regardless of what the transgressors have done, “they have done it unknowingly.”

Arendt’s decision to misrepresent real situations in consequential ways and persuade many others to do the same was made at Heidegger’s prompting.  Nevertheless, even though their hidden love became a power in the world and lasted as long as they did, that decision was not made inevitable by the renewal of their relationship in 1950. Documents she has left us show that, before she first met Heidegger – and long before she met him again in 1950 – Arendt visualized what she would do if she took the wrong path.  Remarkably, Arendt at nineteen foresaw herself deciding in favor of a “destructive desire for power” that “ruined and rejected her youthful kingdom.” Hers was a thoroughly documented life.  In tribute to the woman she might have been, she left us a paper trail of clues.  It was for us to put them back into their original order so that, finally, we could see how exceptional and wonderful was the life story she began and how regrettably she spoiled it.

Arendt, Essays in Understanding 1930-1954: Formation, Exile and Totalitarianism, Edited and with an introduction by Jerome Kohn (New York: Schocken Books, 1994).

Arendt, Eichmann in Jerusalem: A Report on the Banality of Evil (New York: Viking Press, 1964).

Abigail L. Rosenthal is Professor Emerita of Philosophy at Brooklyn College of CUNY. She is author of A Good Look at Evil (Temple, 1987), Confessions of a Young Philosopher (forthcoming), and writes a weekly online column, "Dear Abbie: The Non-Advice Column" at www.dearabbie-nonadvice.com.