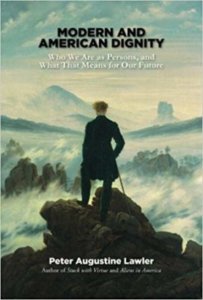 The word “dignity” is not particularly Christian. It has no special significance in the Scriptures and not much history as a theological concept. Only in the twentieth century did moral theologians begin to use it when addressing issues such as abortion, religious liberty, and economic justice. Neither does the word come to us from the classical philosophers such as Plato and Aristotle, who were concerned with the phenomena of undeniable human excellence and the “manly” human need to be important or significant. Aristotle’s magnanimous man, we would now say, possesses dignified self-confidence. Aristotle also writes that nobility—what we would now likely call dignity—shines forth in even the most unfortunate circumstances. My nobility or dignity is more my own than is my happiness, which depends on forces beyond my control.

It was with such Greek reflections in mind that the Roman word dignitas took on a basically aristocratic connotation. Dignity is a worthiness or virtue that must be earned, and the dignified man is someone exceptional who attains distinction by his inner strength of character. Dignitas is a self-contained serenity, a kind of solid immobility that cannot be affected by worldly fortunes. For the Stoics, and especially for Cicero, dignity is democratic in the sense that it does not depend on social status; it is within reach of everyone from the slave (Epictetus) to the emperor (Marcus Aurelius). Dignity refers to the rational life possible for us all, but it is really characteristic only of the rare human being who is genuinely devoted to living according to reason.

Dignity, the contemporary Stoic novelist Tom Wolfe shows in A Man in Full, can shine through even in the life of a maximum-security prisoner who seems to have been deprived of every human good. Mr. Wolfe’s novel shows both that the Stoic way of thinking is almost completely alien to American life today and that it still has powerful explanatory power. He shows us that our sociobiologists and neuroscientists have something to learn from what we might call Stoic science. The Council’s book would have been more comprehensive had a genuine Stoic contributed a chapter, but no critic has yet registered that complaint. The early modern philosophers—following, in a certain way, St. Augustine’s Christian critique of Stoic vanity—denied that human beings could ever achieve a rational, inward insulation from the effects of fortune. They contended instead that it is undignified to allow oneself be a plaything of fortune—of forces and people beyond your control.

There is nothing genuinely dignified in Stoic self-deception about our real bodily dependence. Human beings are stuck with being concerned, most of all, with keeping their fragile bodies alive. So there is something dignified in facing up to that truth and doing something about it—acting with freedom and intelligence to make yourself more secure. In Hobbes’s view, your own life is infinitely valuable and irreplaceable to you, but it cannot seem that way to anyone else. Therefore, Hobbes reasons, your dignity is nothing more than your “public worth.” And that is nothing more than the price your powers can bring: Your dignity is your productivity.

Others recognize your worth only insofar as they can use—and are willing to pay for—what you can do. We have every right to work to become as dignified as we can be, but we do not have an equal right to dignity. Hobbes is for equal rights, but equal dignity is impossible.

There is a lot to be said for ranking people—determining their excellence or importance—according to their productivity. Vain illusions which generate the idleness that comes with inward serenity are dispelled. There is, we learn, no invisible realm of freedom, no impregnable Stoic fortress, into which we can securely retreat. It is undeniable progress to stop ranking people according to their social class, gender, race, religion, and so forth. Productivity is the most visible and surest foundation for a meritocracy—which is why Americans today are having more trouble than ever finding a higher standard than productivity to determine their dignity. Even with the economic downturn, Americans are wealthier and freer than ever, but their dignity seems to depend more than ever on being useful and pleasing to others. They increasingly lack the inward self-confidence that comes with having a personal standard higher than “success.” We might want to say that Americans are both more and less free than ever—and in a way that would earn a Stoic’s cold contempt.

Transhumanists, Charles Rubin explains in his contribution to the Council volume, highlight through exaggeration another reason why it might make sense to identify our dignity with productivity: namely, our powerful inventions. Our present existence is most undignified. We are, as Agent Smith says in The Matrix, a kind of virus or cancer plaguing nature. We are the only animal that cannot achieve equilibrium with its natural environment. We individuals cannot help but be restlessly discontent with nature’s cruel and random indifference to each of our particular existences. Nature itself is an accidental, impersonal process, and we, in our freedom, are accidental exceptions to every natural rule. Surely it is undignified for us meekly to accept what nature imposes on us.

We—the free, technological beings—can transform nature with our desire for individual security and significance in mind. We display our dignity by imposing our will on nature to create a world where we can live as dignified beings—or not as miserably self-conscious and utterly precarious accidents. We can free ourselves from our all-too-human or natural limitations; we can bring our bodies under our rational and willful control. Dignity is displayed in the freedom that produces the rational control allowing us to give orders to nature, including to our own bodies.

The transhumanist impulse vividly illuminates Hobbes’s latent misanthropy. The point of human freedom is to devote yourself to an endless and ultimately futile effort to make yourself into something else. Kant attempted to counter that misanthropy with the other characteristically modern view of dignity. “Humanity itself,” according to Kant, “is a dignity.”

Kant agrees with the modern transhumanists that we are undignified insofar as we are determined by nature, by our embodiment. But he disagrees that our dignity depends on our technological transformation of nature. Each of us is already free and dignified, because what we think and do, insofar as we are human, is not determined by impersonal natural forces. We are free to treat other dignified persons as persons—not merely as impersonal means to achieve our personal goals. Anyone who reduces dignity to productivity turns other human beings into exploitable resources. The dignified being does not have a price, and we are all, as free and rational persons, capable of acting with our equal dignity in mind.

Leon Kass, in his own contribution to the Council volume, explains that Kant actually joins the transhumanists in opposing dignity to the way human beings actually are. For Kant, we are dignified insofar as we are free from the limitations of our embodiment. That means there is no dignity in “begetting”—what we do as devoted parents and children—and there is no dignity in “belonging”—what we do as devoted members of particular communities. Kant’s dignity of rational choice accords no respect to what we do out of love; to be human is to be rational and willful, but not at all erotic. This means that Kant is the source of a kind of humanitarianism that reduces dignity to personal autonomy. For Kant, the person is fundamentally distinct from the human animal—the whole biological being—whom we actually know and love.

Given the inhuman premises of Hobbes’s and Kant’s views of dignity, as well as the inegalitarian and somewhat vain premises of the Stoics, we might conclude that prudence dictates dignity not guide American public policy. Americans will be free to display their dignity through productivity, but that will be their private affair. Kantians will be similarly free to display their nobility, but the law itself should not aim any higher than the protection of “natural rights.” The Declaration of Independence does not say that the Creator gave men equal dignity, only equal rights. The Declaration does implicitly affirm a kind of dignity or rare excellence in the actions of men who put their lives and fortunes on the line for their “sacred honor,” but it does not suggest that in a rights-based country, men should be required to put their honor before their rights. Rights, unlike dignity, neither reduce men to their “cash value” nor require of them some supra-natural virtue.

We might, therefore, conclude that our political community is sufficiently formed by our common devotion to equal rights, and that our necessarily unequal dignity should remain a merely private concern.

This was originally published with the same title in The Imaginative Conservative on July 8, 2017.

From the Fourth Floor of Toronto’s Library

Foundationalism: In Praise of Vagueness

What Can Philip Roth Tell Us About Politics Today