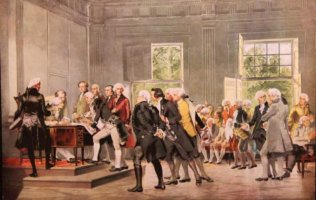 All nations have constitutions—whether written down or not. Why? Because every nation must have rules determining who gets to govern and how. And you don’t need to be a nation to have a constitution. Clubs and corporations have rules of decision-making, and before Europe was made up of nation-states, the various realms (the Franks, the Saxons, and so on) had constitutions. Kings ruled, but they had to respect the power and authority of their nobles, of the Church, and often of the merchants who kept their economies going.

The U.S. Constitution gives fewer powers to the rulers than do most constitutions, for two reasons: First, Americans sought less from government than do many peoples—they already had families, churches, local communities, and especially customs that helped them lead the kind of lives they wanted to lead. Second, Americans already had governments—in their states. The American Constitution is not the rules that order our society. It is not, itself, even the rules that order our government. It is the rules that govern our national (federal) government, and that are intended to keep that government within its proper bounds.

A constitution establishes rules for governing a people. So, before there can be a constitution there first must be a people. And Americans had been forming themselves into peoples before they even came to America. For many years religious dissenting Puritans in England had been entering into “church covenants” to govern their congregations in the face of intolerance from the established Church of England. In the Mayflower Compact, Puritans did the same in America, combining into a “Civil Body Politic” and agreeing to abide by such laws as they thereafter deemed best for the common good. Next came laws, including constitutional laws establishing the forms and powers of the legislature, courts, and so on. American colonists formed many peoples and lived under many colonial “charters” that served as rules for governance, as well as their own customary or common law.

When war with Great Britain came, the colonists had to work together to win independence. They established Articles of Confederation to facilitate cooperation among the (sovereign but embattled) states. After independence was won, however, many Americans came to blame the weak confederal government for trade wars, tax revolts, and bad economic times at home, as well as an inability to command respect abroad. The Constitutional Convention was called to address these problems. Some at that convention (including James Madison) wanted a consolidated, national government to forge strong policies and protect individuals, in particular, from often small-minded states and localities. But Madison admitted defeat on this point when the convention rejected his idea of a national veto power over state legislation. Instead, the Constitution we got was clearly aimed at solving specific problems facing Americans, without destroying the essential role and powers of the states.

So the Constitution is “for” preventing trade and tax wars between the states. It is “for” establishing a stable political and economic system, “for” a unified foreign policy, and “for” doing all this while keeping the national government within the bounds set in the Constitution.

Ours is a limited and rather “negative” constitution, as concerned with controlling as enabling the national government because it sits atop and in a manner incorporates more local institutions and traditions. Indeed, one reason the drafters originally rejected any bill of rights at the national level (they were standard in state constitutions) was the fear that it might make people assume that the national government can do anything it wants unless specifically prohibited. In the end, they accepted a bill of rights to ensure ratification, creating a list of important rights already protected in the states. The national government was forbidden to violate these rights. The Bill of Rights then restated the Constitution’s fundamentally limited nature, leaving most powers and rights with the states, local communities, and people.

Our Constitution empowers a new, national government for specific purposes and limits its power through rules, separating the government into legislative, executive, and judicial branches with the ability to check and balance one another. It is no grand scheme for national empire, or for destroying our primary communities in the name of an individualism that would leave people at the mercy of national courts and politicians. It is important, and great, precisely because it recognizes that people and their rights are social by nature, and must remain rooted in their communities if we are to enjoy the benefits of ordered liberty under the rule of law.

This was originally published with the same title in The Imaginative Conservative on March 24, 2017.