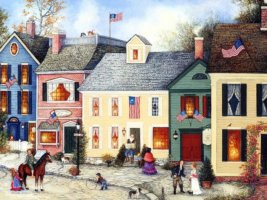 Just as it is gravely wrong to take from individuals what they can accomplish by their own initiative and industry and give it to the community, so also it is an injustice and at the same time a grave evil and disturbance of right order to assign to a greater and higher association what lesser and subordinate organizations can do. For every social activity ought of its very nature to furnish help to the members of the body social, and never destroy and absorb them.

A centerpiece of Catholic Social Thought (CST), subsidiarity embodies the recognition of the link between human dignity and self-government. As Pope Pius XI observed, it is gravely wrong to deny to persons active, participatory roles in directing their own lives, either individually or in the local associations they naturally form. Centralizing policies, whether originating from the political “left” or “right,” and whether benign or malign in intent, invade that realm of choice and informal cooperation in which we express and develop our characters and personalities. To take over the job of family, local parish, or town in the name of efficiency, then, is to treat the members of these communities as mere objects to be acted upon. Even if allowed to vote on centralized policies, people denied their natural role in governing their own actions lose something of their personhood by being treated as mere inputs into and objects of higher powers.

Yet, after well over a century of development of the idea of subsidiarity (first formulated in the encyclical Rerum Novarum, issued in 1891) the movement toward ever-greater concentration of power at the political center continues. Even various conferences of Catholic Bishops seem as concerned to empower the central state to control welfare policies as they are to address the needs of the poor are recognized and addressed. One reason for this, I submit, is that subsidiarity by its nature cannot bear the philosophical and political weight placed on it by many who look to CST for guidance. It must be one part of a broader understanding and practice of public life—an understanding that recognizes the limited nature of political legitimacy and the limited capacity of centralized institutions to bring about even benign, well-considered goals.

To begin with, the language of Quadrogesimo Anno approaches society from a “top-down” vantage point. It thus seems to lend itself to an attitude whereby those at the center of power decide which persons and associations are capable of doing what, then distributing power and authority accordingly. This statement is not intended as a criticism—though surely to an American, in particular, it seems so. Within the Church, it is entirely appropriate for Popes, as well as Cardinals and Bishops, engage society from the starting point of an authoritative Magisterium. (Some, unfortunately, approach society from the vantage point of their own Progressive prejudices, placing their own ideology above the Magisterium itself.)

Among its many essential roles, the Church is keeper and preacher of Truth. As such, it cannot, and must not try to, leave essential matters (of doctrine in particular) to be “worked out” locally and informally. Moreover, theological truth has important implications for the conduct of Church members and leaders. Canon law is one crucial area within which Church hierarchy must be respected, lest the Church herself suffer confusion and indignity among her members.

But in practice, the Church herself is hardly the kind of centralized, let alone totalitarian system in which the center makes all the decisions that matter. The very intricate process of suing under canon law is merely one aspect of the decentralization crucial to the practice of Christian life. Doctrine is and must be set forth with authority and firmness. But history has shown that the Church always has respected the rights of its members to pursue a godly life with a significant measure of self-government. Many of the rights so often used and abused today in the name of individual selfishness have their roots in practices and institutions that grew up within the Church. The right of church cathedral chapters to insist on proper performance of local priests’ duties in exchange for payments (and to sue over disagreements) is only one of many such rights recognizing the importance of local associations. As well, religious orders for many centuries have enjoyed the same kind of chartered rights that spawned constitutional development throughout Europe and at the heart of the American Revolution.

As we all know, political life is not the life of the Church. While secular liberals recognize the necessity of only a paper-thin consensus for society to exist, even they understand that a people must share certain foundational assumptions and norms for there to be peace and cooperation. That said, the disagreements endemic to modern society combine with the facts of human nature to make subsidiarity essential to social life. This is in keeping with the associational nature of the person. Here it is helpful to remember the words of Edmund Burke, who pointed out that “To be attached to the subdivision, to love the little platoon we belong to in society, is the first principle (the germ as it were) of public affections. It is the first link in the series by which we proceed towards a love to our country, and to mankind.”

A nation must recognize binding truths if it is to survive, let alone flourish. But most of these truths are embodied in informal institutions that lack the overt force of law. Traditions, families, and local associations have both historicity and authority; hence they shape the characters of their participants. The government, especially of a republic, binds its people only in the derivative sense of protecting its member associations and establishing binding laws consistent with the people’s character. The higher laws of God and nature are part of the political structure only as they are embodied in those member associations, and as they are institutionalized, particularly in the Constitution. Constitutional, and more generally political higher truths are limited in nature. The Constitution primarily is a mechanism granting, dividing, and limiting political institutions to confine the making and application of law.

Natural law tells us that a nation itself is a “community of communities,” and thus derivative in its authority. The political nation-state, then, also is derivative in its authority. It is true that in the American system the states are in some sense “subordinate” associations in relation to the federal government (and on down to local communities). But the subordination is so much more attenuated than that of, say, parishes within the Church that in the American context, in particular, it is almost misleading to use the term.

In the political sphere, at least, subsidiarity is an admonition to limited government. Thus, for example, when the leaders of the European Union formally adopted subsidiarity as a principle of EU policymaking, they were being less than forthright. By claiming that policies from the EU government in Brussels would take power from more local, subordinate associations only when the task at hand could not be done as well locally, they thereby asserted a political mastery not legitimately theirs. The powers of the central government in any federal system, and especially of a government as derivative government as the European Union’s, are grants from “subordinate” associations. Thus, there are proper limits to the powers of the political center. In the United States, this essential element is embodied in the Constitution’s structure of enumerated powers. Congress is authorized to “make law” only in specific subject areas, and only in specific ways. When the federal government exercises a power not given it by the Constitution it thereby violates the Constitution and the principle of subsidiarity, no matter how good the cause—or how much better its advocates believe it can perform the job at hand.

What this means is that many, if not most, national programs to help various people in need, and to address various, undoubtedly serious, problems, are wrong simply because they are national in origin and scope. They are unconstitutional. They also are in violation of the principle of subsidiarity, even when aimed at alleviating human suffering. This does not mean that we as Americans ought simply to ignore that suffering. But we must act within our own communities and reach out to other communities to help. Otherwise, we cease being members of real, participatory associations within which we can share real, concrete human interactions. Instead, we become mere observers and more-or-less passive supporters of sterile mechanisms of administration (even if benevolently-aimed administration), to the loss of our character.

This was originally published with the same title in The Imaginative Conservative on April 16, 2017.

The Witches of Macbeth: A Weyward Translation

Manchester By the Sea: Dark, Beautiful, and Real