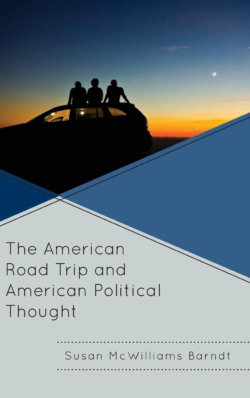 The American Road Trip is a refreshing departure from the kind of theorizing that currently dominates the study of American politics. Rather than treating America’s overt sources of political thought (like The Federalist or the philosophy of John Rawls, though both make brief appearances), Barndt instead trains her focus on America’s literary tradition. In doing so, she advances the unusual claim that American political thought is “at its most diverse and most developed in American fiction” (xvii)—a claim that has also been made by a handful of other prominent scholars (e.g., Catherine Zuckert, Wilson Carey McWilliams) but one which has yet to penetrate the mainstream of American political theory.

Consequently, the writers that Barndt discusses are unexpected and sometimes unorthodox. She thematizes her analysis of the American road trip around the identities of five different ideal-type road trip protagonists: “the seeker, the walker, the laborer, the biker, and the pretender” (xxiii). For seekers, she covers Whitman (“Song of the Open Road”) and Kerouac (On the Road); for walkers, Thoreau (“Walking”) and Cheryl Strayed (Wild); for laborers, Solomon Northup (Twelve Years a Slave) and Steinbeck (The Grapes of Wrath); for bikers, Hunter S. Thompson (Hell’s Angels) and Erika Lopez (Flaming Iguanas); and for pretenders, Twain (Huckleberry Finn) and D.W. Griffin (Black Like Me).

The task she sets for herself, therefore, is to read the aforementioned literary texts as though they were indeed texts of philosophy, in order to elicit their insights into the political complexities of America. And she does so, quite ably: Barndt presents a series of readings of American literature that repeatedly demonstrate the importance of road-tripping as a category of analysis in American political thought.

Barndt’s argument proceeds in two steps. First, by taking road-tripping as a metaphor for a commitment to a certain set of prototypical American principles—freedom, individuality, equality, etc.—she uses her collection of road trip stories to trouble the traditional understanding of those principles. Whitman and Kerouac’s seekers, she argues, go on the road precisely in order to realize such principles, but end up encountering the hard truth that “pursuing the highest American political ideals might alienate one from conventional American life” instead (13). Similarly, Thompson and Lopez’s bikers ride motorcycles (ostensible “vehicle[s] of freedom, individualism, and self-assertion against the mainstream”) but also suffer from a kind of false consciousness, ultimately “dead-ending [] into the very cul-de-sacs they had hoped to escape” (53, 65). Finally, and most shrewdly, Northup and Steinbeck’s accounts of laborers (Barndt’s central chapter) reveal the perplexity that the American road can be “both the site of unfreedom and the basis for fantasies of freedom” at once (47). As Barndt puts it, “in their complexity in this regard, these road trip stories emblematize the conflict and complexity of the American dream” (37).

If Barndt’s first move is to highlight the paradoxical, double-edged reality of America’s political project, however, her second is to offer some resources to help its citizens come to terms with that reality. This part of her argument is most apparent in her discussions of walkers (Thoreau and Strayed) and pretenders (Twain and Griffin). Walkers, she suggests, understand that “both the act of walking and reading about walking are acts of cultivation and provide the necessary groundwork for political reimagination,” and as such offer a model for how Americans could, in the future, “refound their nation” on new terms (30, 31). Alternatively, pretenders provide a different recommendation: They recognize that it is only by embracing additional “prevarication and pretense” that is it possible to deal with the systemic deceptions of America (e.g., the deception of slavery) and face America’s political paradoxes head-on (80). Barndt seems to endorse this second strategy herself in the closing line of the book, where she invokes James Baldwin and remarks that only a new myth can undo an existing one.

But how could either strategy be implemented in practice? This would be a worthwhile area of inquiry for followers of Barndt to pursue. To do so, however, they would have to shore up a few of the limitations in The American Road Trip—namely, they would have to provide a fuller account of the conceptual status of “the road.”

This is the main weakness of Barndt’s book: Although she has much to say about road trips, she leaves the concept of the road itself undertheorized. For her, “the road” is a capacious, perhaps overloaded analytical term: It is variously described as a literal, physical thing (as for Madison, xix), as a kind of Arendtian or Habermasian public sphere (as for Whitman and Kerouac, 6), as a private, personal space (as for Thoreau and Strayed, 21), as an object of psychosis (as for Northup and Steinbeck, 47), as a sort of dead-end or cul-de-sac (as for Thompson and Lopez, 65), and also as a place of racial exclusion (as for Twain and Griffin, 78).

To be sure, roads can and do mean many different things to laypeople. And Barndt is quick to acknowledge that there are “more than a million roads that hatch through the American landscape” and that her book does not presume to cover them all (xxvi). Nonetheless, if road-tripping is to become a meaningful category of American political thought, it will be important to clarify the ontology of that category—i.e., what “the road” means in scholarly terms, for philosophical deployment. In other words, what makes a road trip different from just a regular trip? Barndt clearly counts non-vehicular forms of traveling (like walking) as road-tripping, but what about railroad travel? Steamboat travel? Plane travel? Is there a “road” in any of those?

Here, Barndt might benefit from her own advice to “follow the Greek example” in this respect (xxiv). The Greeks had two main words for “road”: ὁδός (odos, as in “method”) and πόρος (poros, as in “aporia”). The former referred to the contemporary understanding of the road, i.e., as a clearly marked path for getting from one place to another. The latter, by contrast, referred to the idea of the road as a way, i.e., as something that unfolds organically and stands in need of discovery, rather than being set in advance. Could this distinction, originally made by the Greeks, still be useful for thinking about roads and road trips today?

There is no question that road trips hold a special place in the American psyche and ought to be taken more seriously by political theorists. Barndt demonstrates this masterfully, and the staying power of her insight on that front is confirmed by the recent best picture win at the Oscars for the film Green Book, if nothing else. However, The American Road Trip also leaves a few roads unexplored—there is much room for expansion in this exciting new research agenda.

Matthew Dahl is a doctorate student in Political Science at the University of Notre Dame. His research centers around the study of comparative political theory. His website is at https://matthewdahl.me/.