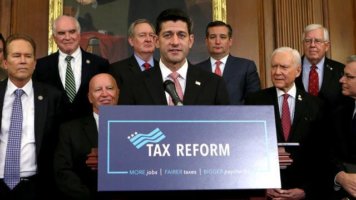 Tucked away in the House version of the Tax Cuts and Jobs Acts—the massive overhaul of the U.S. tax system that has just passed the Senate and is now one its way to committee, where Congress will attempt to reconcile the two versions of the bill—is a provision that would make tuition benefits that graduate students receive taxable. Many have already noted how much damage this provision would wreak upon American science, technology, medicine, and engineering. But what has gone under-observed thus far is how much harm this provision could to American faith communities and to the cause of religion in America as a whole.

There are nearly 150,000 graduate students around the country who earn a minimum wage salary while working as research and teaching assistants. A majority of these students are studying science, technology, engineering, or mathematics.  The discoveries that result from their biomedical research have the potential to solve some of our most dire national health problems, and the advances they make in technology and engineering contribute to our national defense. Making the tuition benefits they receive taxable—taxing them as if they are making $80,000 a year when they are only really receiving $25,000 a year, as a repeal of Section 117(d)(5) of the House bill would do—would raise their taxes by as much as $10,000 per year, making their research unsustainable for all but independently wealthy students. If the bill passes Congress with this provision intact, many, if not most, of these students would be forced to drop out of school, stepping out of the research and development field our country relies upon to make new medical discoveries, develop new weapons systems, and combat cyber warfare.

In addition to impairing our ability to defend ourselves against hostile forces from within (cancer, diseases, and epidemics) and from without (North Korea, Iran, and ISIS), the bill as it currently stands would strike a devastating blow against religion in America. Among these 150,000 graduate students are thousands of students in Protestant, Catholic, and Jewish theological seminaries. These students, among whom I am one, study Christian and Jewish theology, religious-based ethics, and the Old and New Testaments. We train at theological seminaries not only so that we can teach religion in our private communities but so that we can better articulate the importance of our values in the public sphere. We study the history and teachings of our religious faiths so that we can make the case for preserving our faiths at a time when so many are losing them.

At a time when traditional religion is under assault, besieged on both sides by the forces of radical fundamentalism on the right and radical atheism on the left, now more than ever our country is in need of religious leaders trained by mainstream Protestant, Catholic, and Jewish theological seminaries who can make the case—with the moral courage of Martin Luther King, Jr., the rhetorical eloquence of Abraham Joshua Heschel, and the intellectual brilliance of Ralph Waldo Emerson (all of whom were either trained in, or taught at, American theological seminaries)—for the Judeo-Christian values upon which we believe our nation stands: the importance of faith-based morality, the primacy of the Bible, and the non-negotiable principle of the infinite sanctity of each and every single human life. If the repeal 117(d)(5) of the tax bill is not eliminated, many, if not most, of our future religious leaders will be forced to drop out of theological seminaries, leaving only a select few—untrained, undisciplined, and under-educated in Christian and Jewish theology—to make this vital case. The cause of faith in America could wither on this tax bill’s faithless vine.

The modern Republican Party has been built upon a strong but now tenuous coalition of business interests, defense hawks, and religious conservatives. If the Republican Party wants to ensure that religious Americans remain within its tent, it would do well to make sure that the repeal of Section 117(d)(5) is eliminated from the final version of the Tax Cuts and Jobs Act. The future of the party—and the future of faith in America—may depend upon it.

Daniel Ross Goodman is a writer, rabbi, and doctoral candidate at the Jewish Theological Seminary of America and studying English and Comparative Literature at Columbia University.