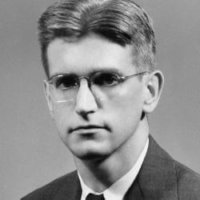 In my last essay I wrote about Gerhart Niemeyer who sought to avoid indoctrinating his students in order for them to pursue the true, the beautiful, and the good. In this essay I want to do the same thing but look at one of Niemeyer’s students, John H. Hallowell, as a teacher. Spending almost forty years teaching political philosophy at Duke University, Hallowell during that time published three books, The Decline of Liberalism as an Ideology (1943), Main Currents in Modern Political Thought (1950), The Moral Foundations of Democracy (1954), and numerous articles in political thought. He received several academic honors for his scholarship during his lifetime and his works have been translated into several languages in Europe, Asia, and the Middle East.

However, as Timothy Hoye writes in his chapter in Teaching in an Age of Ideology, Hallowell saw himself first and foremost as a teacher rather than a scholar or civic activist. In a letter to Dean Friedl on September 15, 1981, he wrote, “I entered this profession because I wanted to teach. In my opinion a university consists of teachers and students primarily. I have always considered teaching my first and most important responsibility.” Hoye points out that Hallowell wrote this letter in frustration with him not understanding how his department chair and colleagues have dismissed the importance of teaching in their profession. In an earlier letter, Hallowell wrote, “It does come to me as something of a surprise to learn that teaching is not considered by my department chairman to be all that important. I would have thought it was the most important activity in which a professor could be engaged.”

Teaching clearly was the most important professional priority for Hallowell, but what did this mean, especially teaching politics? For Hallowell, an education in politics was not participating in it but rather learning to think about it first. This educational process of learning how to think was a mutual search for truth with students, who respect their professors while encouraging to take issue with them and reject their arguments if students have sound reasons. By examining the classics and examples of great statesmen, students would discover the practical knowledge of locating the best means to promote justice within a community. Contrary to those who advocated practical observation and participation in politics as the most effective means to learn about it, Hallowell recognized the prior need of students being able to think, evaluate, and explain their actions before actually doing them; and the best way to accomplish this was to study the tradition of the good, the beautiful, and the true.

But looking at tradition as the guide for the true, the beautiful, and the good did not make Hallowell a political conservative. In fact, he considered himself a life-long Democrat after Jimmy Carter’s election in 1976 and was an outspoken member against the proposal of establishing the Nixon Presidential Library at Duke. Yet later he supported Ronald Reagan’s election in 1980 and the policies of his administration and was cited along with Ludwig Von Mises, Richard Weaver, and others, as influential in the formation of the Reagan’s political vision. A cynic might interpret Hallowell’s behavior as one of mere opportunism, seeking advantage when it availed itself. Another, and probably more accurate, account would be that Hallowell understood that, although the principles of truth were permanent, its manifestations were not, and, consequently, one had to adapt to the contingencies of the time in order to realize as best as possible the true, the beautiful, and the good.

Just as in the classroom where every semester the teacher is confronted with a new and different set of students and must figure out the best path to teach them, the democrat citizen also must determine which choice at that particular moment would be best for his or her community. In some semesters, the Socratic method is the most effective way to elicit response from students; at other times, it might be better to employ the traditional lecture. Likewise, for the citizen in some cases, it might be better to support a Democratic candidate; in other cases, a Republican. Throughout his life, Hallowell both recognized and practiced this lesson of prudence as a teacher and as a citizen.

Tradition therefore is not to be turn into some set of dogma to be passed down memorized but not understood from one generation to the next. Tradition is to make us think about our current situation and how best to navigate it to achieve the true, the beautiful, and the good. This understanding of tradition and how to teach it is particularly relevant to schools which dedicate themselves to the Great Books or other such pedagogy but often ossified the tradition so it can no longer breathe. The result is that students study and know Socrates, Aquinas, and Hobbes but with no lasting impact on their souls.

However, the more typical problem in the modern university is the failure to recognize the importance of teaching the tradition itself. Usually the tradition is condemned on ideological grounds or dismissed for utilitarian ones. John H. Hallowell recognized that both paths were mistaken in the mutual search for truth. We need the tradition but just for its own sake: we need the tradition for ourselves to guide us in our lives in the here and now. It would be useful and wise for those of us in education to recognize and practice this, too.


This essay was originally published in The Imaginative Conservative on March 23, 2013.