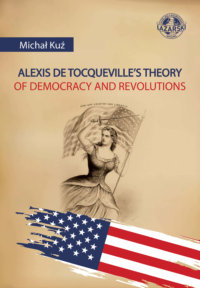 Michał Kuź’s Alexis de Tocqueville’s Theory of Democracy and Revolutions is an attempt to combine Tocqueville’s political theory with the insights of contemporary social scientists on politics, culture, and technology. Tocqueville, he argues, formulated a general model of political change that has been shown to have remarkable predictive power. Neither an historicist like Marx or Kojève, nor a believer in the applicability of pure philosophical truth to politics like the ancients or today’s Straussians, Tocqueville managed to develop an approach to political science that accords due weight both to the socio-economic dynamics of history and the power of ideas. In this way, the 19th century Frenchman was able to discern political developments from his own century to ours with an accuracy rivaling, and in some cases surpassing that of modern professional political scientists. Given the superiority of Tocqueville’s model of political change, Kuź argues it can give us special insight into future political developments in the present century and beyond.

The book is divided into three chapters. The first chapter, “Revolution, Democracy, and the Paradox of Democratic Legitimation” covers what will be familiar ground for most students of Tocqueville. The term revolution is used in two senses. Revolution is, in its more usual sense, a “concrete, violent event, that brings a political change” (p. 21). But the “great democratic” revolution is a long-term “global drive toward greater equality of conditions” (p. 20).  This chapter focuses on the latter. The essence of Tocqueville’s democratic revolution is for Kuź the triumph of individual rationality, initially confined to certain spheres, as in the theology of Luther, or the philosophy of Descartes, but ultimately extended to everything, to the detriment of religion, culture, social and political bonds, and even individual freedom.

Kuź proceeds to recount the various dangers Tocqueville discerned in the democratic revolution, and the remedies he proposed to tame it. What is most notable in this chapter is that it appears from Kuź’s own account that most of Tocqueville’s well known remedies for the excesses of democracy have not been applied, or have been tried and have failed. The doctrine of self-interest properly understood was supposed to replace outmoded notions of national virtue, based on primordial attachments and tradition, and allow democratic citizens to find a new middle ground between individual and collective rationality (p. 37). And yet, twentieth-first century democracies are increasingly atomized and polarized along ideological, ethnic, regional, and religious lines. The deliquescence of religion into vapid pantheism was supposed to be forestalled by the teaching of piety at the municipal level (p. 38). And yet, at least in the United States, municipal governments gradually retreated from this duty in the later nineteenth century until, in the twentieth, the Supreme Court forbade them to do so ever again.

Tocqueville’s recipe to preserve culture from democratic mediocrity, a liberal education centered on the Greek and Roman classics transmitted to a select few, has, one could well say, been abandoned for “a multitude of bad colleges where superfluous studies done badly prevent necessary studies from being done well” (p. 39). America’s noblesse de robe (i.e. “the soul of jurists”) has stood valiantly in the breach and prevented any would be military dictator from entering the office of the presidency, and yet this democracy is, arguably for reasons Tocqueville anticipated, among the most belligerent on the world stage today (pp. 35, 41). Democratic legitimization, in effect, makes government more powerful than ever before, and thus more dangerous. Since the social power of the community cannot be reduced to what it was before the coming of the democratic age, Tocqueville’s solution is to disperse that power widely among the national, and various provincial and municipal authorities, as indeed Thomas Jefferson had recommended, and the United States did for a long time (pp. 48-49). But the democratic tendency toward centralization has clearly prevailed in almost all advanced nations. Even among American conservatives today, traditionally closer to Tocqueville in spirit than progressives, one begins to hear calls to give up on fantasies about “little platoons” and embrace the power of the central government.[i]

Kuź begins his second chapter, “Tocqueville’s Theory of History and the Spiral of Revolutions,” with a survey of some of the scholarship on Tocqueville, which he divides into two camps, historicist and Straussian. The upshot of this discussion is that the historicists get him completely wrong, and the Straussians partly wrong.  Historicists such as Wolin and Boesch appreciate Tocqueville to the extent that his thought anticipates their own Marxian historicism, but where he diverges, they dismiss him for his inability to think outside of the prevailing ideas of his time. Orthodox Straussians are troubled by the apparent historicism in Tocqueville’s theory, namely the thesis of the inevitability of democratic revolution, and take great pains to explain it away it in their interpretations.

“Moderate” Straussians avoid that fuss, and give Tocqueville credit for recognizing a clear historical development which continues to shape events in our day, namely, the very same “great democratic revolution.” Pierre Manent and Peter Augustine Lawler, for instance, note how the democratic passion for equality, having vanquished the old inequalities of condition, has now turned its sights on inequalities arising from inborn differences in sex, intelligence, beauty and the like. The revolt against natural inequalities manifests itself, on the one hand, in a drive to dumb down the intelligent and weaken the strong, and on the other, in an attempt to “direct the development of biological and technological sciences” toward the promise of providing “infinite perfectibility” to all (p. 73). Ultimately, Tocqueville is neither historicist nor Straussian in his approach to political analysis, and herein, according to Kuź, lies his strength.

The core of this chapter, and of the book as a whole, is what Kuź calls “Tocqueville’s spiral of revolutions.” What is distinctive about Tocqueville’s theory of political change is that it combines two models, the cyclical conception of regime change of the ancients, and the progressive conception of modern historicists. The cyclical element in Tocqueville’s theory has to do with the change in regime type, for instance, from monarchy to democracy, or vice versa. The progressive element takes into account the political effects of the “great democratic revolution”, namely the increase of social power owing to democratic legitimation of government, and the growth of centralized administrative power at the expense of intermediary powers. Moreover, this element accounts for the continuity of political practices from one regime to the next.

Tocqueville’s model is best understood as a spiral, because the range of possible regime types decreases as the equality of conditions and democratic ideas of government advance, until one is left with only one final form of government, the “soft despotism” Tocqueville predicts near the end of Democracy in America. The whirling of the spiral may be slowed or stopped indefinitely under the right circumstances, but soft despotism is the end-point to which the great democratic revolution, unchecked, naturally leads. In Kuź’s analysis of Tocqueville, the preservation of freedom requires that certain equilibria be maintained. A balance must be found between individual freedom and the power of social and political associations to regulate their members. Technology must be managed to liberate human beings rather than enslave them.

In the final chapter, “Tocqueville and Modern Revolutionary Studies,” Kuź first situates Tocqueville’s theory of political change within the contemporary political science literature on the subject, and then offers a general prediction for the further development of 21st century politics on that basis. We see that Tocqueville, with his commonsensical, probabilistic approach to political analysis, anticipated many of the conclusions of later political scientists without the benefit of their large research budgets and datasets. For instance, his analysis of the factors leading to the French Revolution in The Old Regime follow is similar, and in Kuź’s view, more sophisticated than the J-curve model for predicting social unrest, formulated by James Davies, and still used by political scientists.

Tocqueville’s general model of political change suggests for Kuź the likelihood of a new dark age emerging in the 21st century, featuring the following developments: 1) the transformation of the idea of equality into a religious dogma; 2) the rise of industrial and military aristocracies and the continued decline of the middle class; 3) a reduction in technological innovation; and 4) demographic decline together with the absence of major political revolutions over a prolonged period (pp. 110-111). These predictions are mostly in line with Tocqueville’s descriptions of soft despotism, and the author marshals some social science data to support them. Kuź’s Tocqueville is thus not only a prescient political theorist, but also a prophet of doom.

Michał Kuź has written an interesting study of an important subject. I would offer only two criticisms. First, the work has the character of a Ph.D. dissertation which was not quite yet ready to be published as a book. The stylistic problems and printing errors are distracting, and the engagement with the vast scholarship on Tocqueville is much less than it should be. Second, and more substantively, it seems that a book premised on the remarkable prescience of Tocqueville should try to address the apparent failure of his prescriptions to tame democracy. One should not forget that it was not only liberty that Tocqueville wished to preserve, but also the nobility of man.  He feared that man’s “sublime faculties,” of which he named three – “a taste for the infinite, an appreciation of greatness, and a love of spiritual pleasures” – would atrophy in democratic times, and called upon “lawgivers and . . . all upright educated men to raise up the souls of their fellow citizens.”[ii]  If all or most of his proposals for the preservation of the liberty and nobility of man have been rejected or overwhelmed by the march of equality, then Tocqueville’s analysis indeed suggests only one likely outcome: soft despotism. But perhaps this reveals, merely, that Tocqueville’s vision was wanting? He did not perceive how pervasive and fanatical democratic equality would become, or was too timid to offer solutions sufficiently bold to restrain it?

Kuź’s prediction of a Tocquevillian new dark age of relatively stable governments managing quiet decline also strikes the observer as odd. The loss of vitality that Tocqueville predicted would come with unrestrained individualism and materialism, and the growth of the administrative state, seemed to proceed apace for a long while, and the process may continue in many parts of the globe.  But with the resurgence of nationalism, and various other forms of tribalism in recent days, setting the stage for what David Goodhart has characterized as battle between the “anywheres” and the “somewheres,” which threatens to break historic polities apart, one has ample reason to doubt that stability and quiet await us.[iii]

[i] See Julius Krein, editor of the journal American Affairs.

Ethan Alexander-Davey is an Assistant Professor of Political Science at Campbell University in North Carolina. He is co-editor, with Richard Avramenko, of Aristocratic Souls in Democratic Times (Lexington Books, 2018), and author of several articles on early modern constitutional thought and 19th century Russian conservative thought.

Novels and the Sociology of the Contemporary