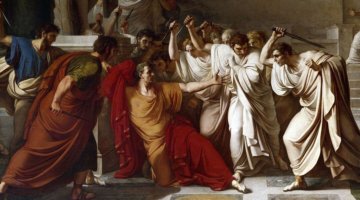 “Beware the Ides of March!” As it does every year, this March fifteenth affords us the opportunity to contemplate the recurrent patterns of history. Yet what exactly was the pattern exhibited on that infamous day?

René Girard, in his brilliant book on Shakespeare (A Theater of Envy [1]), calls into question the conventional interpretation of Shakespeare’s dramatization of the murder of Julius Caesar. Girard has observed that human society is held together by repeated acts of scapegoating eligible victims. He therefore asks us to consider the extent to which Caesar himself is shown by Shakespeare to have been one of history’s scapegoats.

As he begins his exploration, Girard voices the immediate objection to his “Caesar as scapegoat” interpretation; namely, that Caesar is no innocent victim, but rather a genuine culprit guilty of endangering the state: “Is he not truly responsible for the decay of republican institutions; is he not a tyrant, therefore a real culprit?”[2]

Yet Girard cautions us against attributing such ideas to Shakespeare, because it is by no means certain that Shakespeare would share our merely conventional views about Caesar and Roman tyranny. Instead, he wants us to consider the possibility that there are “features in Caesar that make him a typical scapegoat.”[3]

If we pay attention to these very features, then we may be able to see how Shakespeare illustrates that Caesar was “unconsciously selected for this typicality”; that is, any conscious “appreciation of what is really singular” in Caesar is beside the point when it comes to discerning the operation of the unconscious scapegoating dynamics always operative in political history. While Shakespeare as “a statesman and an individual” may be one thing, when the mob has its way, however, the mob is blind to anything else but those features that allow Caesar to be marked as an eligible scapegoat whose death might generate civil harmony.[4]

Girard notes that the murder of Caesar fulfills two obvious requirements for a scapegoat. First, Caesar is the victim of a collective phenomenon. Second, while scapegoating can happen at any time in history, it usually happens during an acute crisis—and such was the case with Caesar’s murder, which attempted to resolve deep divisions between the Roman patrician and plebian classes that had turned domestic politics into an open arena of civil war for decades.

But there is a third requirement that is not usually noticed: a physical defect or deformity, as is typical of mythical scapegoats, like Oedipus and his famous limp. Just as Girard is able to recognize the characteristics of an Oedipus that would mark him out as an eligible target for a mob looking for someone to blame, so too does he call our attention to the characteristics of Julius Caesar highlighted by Shakespeare: “Caesar has his share of infirmities: he has a bad ear, and suffers from a disease, epilepsy, that resembles the possessive trance—which is no doubt why ancient and primitive societies viewed this falling sickness (I, ii, 254, 256) as a sign of personal affinity with the sacred in all its forms, the bad as well as the good.”[5]

We should notice how Casca wants to claim the sacrality of the “falling sickness” for those who would conspire against Caesar, rather than allow Caesar to possess it instead. Of course, this takes the form of a conscious lament that Caesar’s fortunes are rising as theirs are falling. Yet the sacred connotations of his words resonate with Shakespeare’s main theme in Julius Caesar (of which Cassius professes conscious ignorance) concerning the unconscious scapegoat mechanism: namely, how an attempted sacral murder ends up becoming an inefficacious sacrifice. Reminiscent of the mythical accusations against Oedipus, Casca marks Caesar as a culpable target for sacred violence, since Caesar can murder people’s mothers and yet still win popular acclaim:

Cassius: But soft, I pray you: what, did Caesar swoon?

Caska: He fell down in the market-place, and foamed at
mouth, and was speechless.

Brutus: ’Tis very like: he hath the falling sickness.

Cassius: No, Caesar hath it not: but you, and I,
And honest Caska, we have the falling sickness.

Caska: I know not what you mean by that, but, I am sure
Caesar fell down. If the tag-rag people did not
clap him and hiss him according as he pleased and
displeased them, as they use to do the players in
the theatre, I am no true man.

Brutus: What said he when he came unto himself?

Caska: Marry, before he fell down, when he perceived the
common herd was glad he refused the crown, he
plucked me ope his doublet and offered them his
throat to cut. An I had been a man of any
occupation, if I would not have taken him at a word,
I would I might go to hell among the rogues. And so
he fell. When he came to himself again, he said,
if he had done or said any thing amiss, he desired
their worships to think it was his infirmity. Three
or four wenches where I stood cried, ‘Alas, good
soul’, and forgave him with all their hearts. But
there’s no heed to be taken of them: if Caesar had
stabbed their mothers, they would have done no less.

Not only does Girard notice the action of Caesar described in this passage, a mock sacrificial ritual in which he offers his throat like “some sacred king volunteering for the role of sacrificial victim,” Girard also considers the corroborative significance of the fact that Shakespeare associates Caesar “with both the Lupercalia and the Ides of March, two Roman festivals rooted, as all such festivals are, in so-called scapegoat rituals”.[6]

In this light, we can understand the famous admonition—to “beware the Ides of March”—to be not just a soothsayer’s warning to Caesar, but also Girard’s own reminder to us, to be more cognizant how the dynamics of scapegoating perennially function in human affairs, especially when we least expect it.

A scathing indictment from Girard awaits those critics who fail to credit Shakespeare with the recognition of the patterns of scapegoating exhibited in Caesar’s murder: “If these critics were right, Shakespeare could not depict mimetic phenomena as powerfully as he does. When we read Shakespeare from the standpoint of a rationality inferior to his own, there are only two possibilities. First, we may piously pretend not to see whatever does not fit our narrow rationality and celebrate our own mutilated version of his genius; we reduce the scapegoat aspects of Caesar to a picturesque décor with no decisive impact on the overall significance of the play. Or alternatively, we face up to these irrational aspects and cannot understand why they should figure in the narrowly “historical” play that we want Julius Caesar to be; we must accuse Shakespeare himself of unreason. We suspect that he was a kind of super Casca, a man with a great poetical gift, no doubt, but primitive as a thinker, a believer in irrational signs.”[7]

As with the drama, so too in political life today: Those who would downplay the role of mythical thinking in cultural dynamics will also downplay and “reduce the scapegoat aspects” of the widespread antipathy to foreigners typical of the contemporary resurgence of populism and nationalism. This conspiratorial mindset, able to construct “alternative facts” about other people that are founded on nothing more than sheer belief, is exceedingly common amongst the most fervent followers of today’s new authoritarian figures.

Yet out of sympathy with the aims of these new populist leaders, such a post-truth mindset is considered by many to have “no decisive impact on the overall significance” of the political movement aiming at a salutary “deconstruction of the administrative state.” But is not this very mindset of even greater potential significance than the ephemeral political aims it currently serves?

Those of conservative temperament will be wary of those who refuse to take seriously the scapegoating dimension of the current populist ideologies, which tell sad tales of villains who must be targeted and punished. The first step to taking that dimension seriously is to admit that the scapegoating pattern will first arise unconsciously.

Hopefully, statesmen with greater rationality may discern how the scapegoating mechanism unfolds unconsciously amidst the inferior rationality of the conscious political deliberations of today’s citizens. To aid them, a great artist like Shakespeare shows the way towards discerning how both of these dynamics are now ambiguously in play: both the conscious struggle against administrative tyranny, and the unconscious impulse to solve difficult problems with divinely sanctioned violence.

Beneath contemporary rationalizations for electing previously unthinkable populist leaders, there lies something deeper and darker that first made conscious reasoning possible. This dark unconscious something ever threatens to undermine reason, as often happens whenever reason hubristically forgets either its own genealogy or its own historically precarious nature. Yet a true conservative consciousness, in Burkean fashion, should strive to maintain mindfulness of the delicate history of reason and of the prejudices upon which it is able to rise up.

In the crisis of our own historical moment, Girard’s warning is eminently worth considering: “Reason itself is a child of the foundational murder. As our own mimetic crisis worsens, we plunge into nihilism and madness, and cannot afford to disregard the thinkers who preceded us on this road; we need the real William Shakespeare more than we need any modern philosopher.”[8]

This was originally published with the same title in The Imaginative Conservative on March 14, 2017.