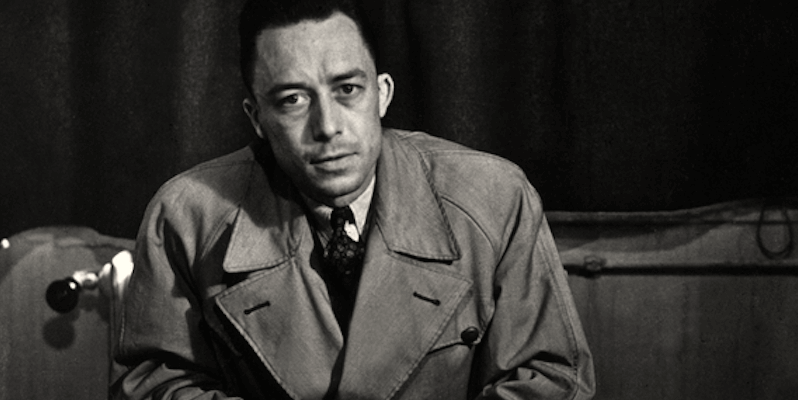 “There are no deserts. There are no more islands. Yet there is a need for them. In order to understand the world, one has to turn away from it on occasion; in order to serve men better, one has to hold them at distance for a time. But where can one find the solitude necessary to vigor, the deep breath in which the mind collects itself and courage gauges its strength?”1

There are many philosophical similarities between Albert Camus’ The First Man (Le premier homme), an autobiographical novel that was published posthumously in 1994 by Editions Gallimard, and his first novel, A Happy Death (La mort heureuse).

In A happy Death, which Camus completed in 1938 at the age of twenty-five, the author develops a life-affirming, and in light of postmodernism’s continual erosion of the human person, productive line of reasoning that has the protagonist attempting to capture the essence and immediacy of death by seeking happiness. While this idea may not be original to Camus, he augments this theme by infusing it with existential vigor. Patrice Mersault – not to be confused with Meursault in The Stanger (L’Étranger) – the young protagonist of A Happy Death, confronts life in the same manner as other of Camus’ literary characters: as a proto-first man. This is a courageous and creative act. Patrice must come to terms with the reality of being a concrete, flesh and blood person.

Although the order of human reality may appear incoherent and absurd at times, Camus’ thought is ultimately about the nature of man, a being capable of finding meaning through self-reflection. How is the latter possible?  Because Camus and other existentialist thinkers like Unamuno, Marcel and Walker Percy embrace man as a concrete entity. Percy describes man as a being who finds himself lost in the cosmos. Existentialists do not confront human existence as a listless theoretical abstraction, or through collective social/political categories, but rather an individual’s lived experience as differentiated being.

This is a significant aspect of Camus’ work for several reasons. One of these reasons is that Camus is not interested in erecting ideological collective structures. Camus was born into poverty. His father died when he was a young boy and was brought up by his illiterate mother. When Camus attended high school, he came into the company of many boys whose fathers were professionals. Camus did not opt for the quick and easy promises made by radical ideology, e.g. communism – like Sartre, Merleau-Ponty and many other French intellectuals during his lifetime.

Camus did not consider himself an existentialist. He didn’t approve of that moniker being applied to his work. Thus, another important aspect of his thought is that Camus’ philosophy of existence is guided by the zest to reflect on singular and differentiated experience.

Unless we are poised to embrace the thought of an existentialist thinker on intuitional and temperamental equal footing, we risk deforming and undermining a thinker’s work. This is why teaching Camus to young people today is such a hazard, a delicate task that many people who venture to teach his work bungle.

Lived existential concerns do not fall, say, in the same category as Kafka’s sophomoric “existential” science fiction. In A Happy Death, the young protagonist is concerned with living a good life in order to anticipate a happy death. This is the practical aspiration of a young man, which entails self-discovery and the necessary autonomy to embrace wisdom in the service of life.

In other words, Camus’ contention is that philosophical reflection prepares us for death, through reflective readiness to embrace the finality of the self. Socrates, Marcus Aurelius, Montaigne and Pascal, to name just a few thinkers, display affinity for this practical human concern. A Happy Death is a meditation on the values forged by man’s future-oriented existence; man is aware that the future is imbedded in a vitally lived immediacy: the present.

The passage of time is a central and unifying theme in Camus’ work. In A Happy Death, Patrice arrives at the realization that to possess time can be an exulted but dangerous experience. Idleness fosters existential stagnation and mediocrity, for idleness is an attack on free will. Camus’ protagonist learns that existential inquietude is quenched by assuaging the resistance that objective reality and the world create for honest philosophical reflection.

The First Man further develops the concerns that Camus entertained as a younger writer in A Happy Death, a novel that was also published posthumously in 1971. The death of Patrice’s father in A Happy Death exposes the horror that the passage of time can pose for reflective persons. Patrice and the protagonist of The First Man, Jacques Cormery, seek transcendence. In both cases, the consensus is that happiness originates from a pure heart; cultivating virtues that lead to a contented existence.

Camus’ situation as a philosopher and writer was precarious. He was awarded the 1957 Noble Prize in literature. He was blacklisted by the French Communist Party; a witch hunt that was originated by Jean-Paul Sartre. The Catholic existentialist, Gabriel Marcel, was another victim of Sartre’s character assassination. As a result of this, Camus found it next to impossible to publish his books and put on his plays in the theater.

Camus was a stoic. Being a poor boy from a miserable neighborhood in French Algeria, and losing his father in World War I, Camus seemed ideal fodder to be used by communist propagandists, except for his unbending moral and intellectual integrity.

Camus’ thought eschews radical ideological group-think.  His idea of metaphysical rebellion proposes courageous engagement with reality that leaves no room for external blame or sentimental rationalization. In The Rebel, Camus explains that nihilism is the modern plague. Nihilism – the denial of objective values, meaning and purpose in human existence – is a corrosive disease that afflicts man’s ability to attain contentment. This attack on nihilism did not sit well with Jean-Paul Sartre’s self-indulgent and bloated relativism.

Camus does not allow metaphysical rebellion the indiscretion of becoming the basis and escape valve of radical ideology. Metaphysical rebellion cites cosmic contingency, limitation and difficulty as its main sources of inspiration. This perspective on human reality makes Camus a refreshing twentieth century thinker, a time during which many intellectuals were eager to serve as a mouthpiece for Marxism.

As a stoic, Camus did not shun the world. He did not retreat into an insular existence. This is a staple theme of his thought. This is also evident in his engagement with the French resistance during World War II, and his concern for the victims of communist, Soviet-bloc atrocities. Camus’ October 1957 speech “The Blood of the Hungarians” is a rebuke of the Soviet Union’s occupation of Hungary.

There is also a reserved side to Camus, the man, which he found to be at odds with Camus the public intellectual. Against nihilism, Camus promoted the thought of thinkers who labor to bring coherence to what Kant calls the chaos of sensations in human experience. For Camus, sincere thinkers augment man’s understanding of human reality. A strong indication of the respect that he felt for other thinkers and writers is evident in the scant number of negative references that he makes about the work of other thinkers and writers.

For instance, in The Myth of Sisyphus Camus writes about Dostoyevsky’s The Brothers Karamazov, and Kafka’s The Trial and The Castle in a positive light. His references to Nietzsche, Kierkegaard and Chestov serve as praise that enable him to develop his ideas about human reality as absurd. The Myth of Sisyphus is an exploration of the nature of life and death, and the Socratic question of what constitutes a worthwhile life, even when human existence appears absurd at times.

In the first part of The Rebel Camus reflects on man’s place in what he considers an absurd universe. Part of what makes the universe absurd is man’s innate ability to engage in self-reflection. The problem is that while the universe is cold and impersonal, man is a being who seeks meaning. In Camus’ later work, he moved away from his view of existence as absurd. The second part of The Rebel is one of the most devastating indictments of Marxism offered by any twentieth century thinker.

For the human person, the ebb and flow of time is not today and has never been anything other than a sensual process. To make more of time than a seasonal explosion and contraction of foliage takes imagination, awe and wonder, and the zest to possess time as lived experience. This is the essence of personal autonomy.

Only the contemplative temperament can truly know the measure of time, as this apparent jokester rules over human existence. This is hardly a secret, for it takes genuine vocation to know and respect the essence of human limitation.2 Circa 2020, it is apparent that post-modernity has castrated introspection and existential reflection.

What the Romans called gravitas – seriousness of purpose – has given way to affected and pseudo-religious devotion to popular causes. The Greeks taught us a thing or two about the nature of masks, didn’t they? Today, human existence has been confused and cheapened by spurious social/political censure propagated by radical ideology.

Camus is correct that postmodernity exhibits an infirmed preoccupation with the world. Wordsworth asserted the same thing before him. Having emptied ourselves of meaning and purpose, we now welcome the background noise of the material world.

Flesh and bones decay into the straightjacket of oblivion, leaving behind only a dusting of our former vitality. Patrice learns that human reality operates on several levels. Postmodernity affirms innovative forms of affected popular lies, while destroying aporia conveyed by the perennial elephant in the room.

Man’s world is truly many worlds. We encounter reality as objective and patent, and reality that is objective but latent. This is the profound discovery that Patrice’s makes by engaging life as lived-experience

Rocky: A Theatre for Heroism