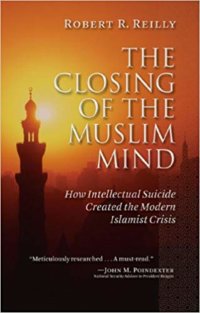 
In 2002 Bernard Lewis published a remarkable book, What Went Wrong? Western Impact and Middle Eastern Response. In his new book, Robert Reilly doesn’t ask what went wrong or even how did it happen. What he does ask is “Why?” That is, he proposes an explanatory interpretation, not a narrative of events. This is a more philosophically difficult task and is bound to be more controversial as well, and not just in the Muslim world, which has grown extraordinarily sensitive to such questions.

The thesis is disarmingly simple: “a large portion of mainstream Sunni Islam, the majority expression of the faith, has shut the door to reality in a profound way.” Reilly attributes this non-recognition of reality to a “dehellenization” of Islam, a condition made even more acute, thorough, and effective because “few are aware that there was a process of Hellenization preceding it.” According to Reilly and other western scholars of the history of Islam, until the ninth century it was still possible to discuss questions which are still familiar in the West, such as the relationship of reason and revelation, or the relationship between noetic and pneumatic experience and symbolization, or even the capability of reason with respect to truth. Such questions are, or were, common to all monotheistic religions.

The two chief ways of closing the mind, whether Muslim, Greek, or American, have been familiar since Plato’s day and were brilliantly restated by Allan Bloom in 1987: (1) reason cannot know anything; (2) reality is unknowable. Reilly begins from a basically Platonic position that closing the mind or a refusing to apperceive reality is a constant human possibility. He then provides a brief history of the original encounter of Islam with philosophy as practiced in the Byzantine and Sassanid territories conquered during the early Islamic centuries. The most interesting result flourished as the so-called Mutazalite School of theology. As did Socrates in the Euthyphro, they discussed and decided such questions as whether God forbids murder because it is wrong or whether it is wrong because God forbids it.

The Mutazalites would have agreed with St. Thomas that humans are capable of apprehending things created in their minds because such things were first thought by God. That is, God’s intelligibility is what makes God’s creation intelligible. God can neither be unreasonable nor unjust, they held, because His reasonableness and justice were obligatory (wajib) or part of His nature.

The height of Mutazalite influence came in the first half of the ninth century. Central to their teaching was the notion that the Koran was an historical document rather than an entity that has coexisted with God from all eternity. This is an issue that has recently again become an item of discussion, at least among scholars, Muslim and non-Muslim, outside the Muslim world. For the Mutazalites, an uncreated Koran violated the fundamental nature of God, His unity (tawhid). An uncreated Koran, they argued, would be like a second God, which was impossible.

More than internal religious debate was involved however when the caliph al-Ma’mun required religious judges and witnesses to take an oath that Mutazalite doctrine was true. This inquisition (minah, testing) was more than an argument, though perhaps less than compulsion. In any event, as Reilly argued, there is nothing inherently irrational in the use of force to defend reason; “the enemies of reason cannot be opposed by reason alone.” How else but by force can reason then be defended against the unreasonable? This is a self-evident position that Westerners have forgotten as thoroughly as Muslims.

The “traditionalists,” as Reilly called the non-Mutazalites, believed in a lot more than in the uncreated status of the Koran, though that was a central pillar of their position. If eternal God had spoken to humans in the eternal Koran, there was no need for reason because reality and instruction had been finally and completely revealed. This was the fundamental position of the Asharite School founded by Abu Hasan al-Ashari in the early tenth century. In contrast to the Mutazalites, the Asharites emphasized the unlimited will of God, not His reasonableness.

The dispute with the Mutazalites was not over whether God created everything; they were agreed on that. Rather it was over whether, in addition to what Christian scholastics were to call the primary cause, namely God, there were secondary causes. For the Asharites there were none. The implications of this position were elaborated a century and a half later by Abu Hamid al-Ghazali in Deliverance from Error. According to al-Ghazali, the Koran does not reveal God but God’s instructions to humans. In effect this reverses the Socratic and Mutazalite teaching: murder is wrong because God wills it. Thus good is what is permitted, halal; evil is what is forbidden, haram. There is, in consequence, no need for moral or political philosophy at all because there is no need to reason about things.

Al-Ghazali’s other major book, called The Incoherence of the Philosophers, argued that, because God is not bound by anything, there is no “natural” cause-and-effect sequence. In Thomistic language, there are no proximate causes but only a prime or first cause, namely the will of God. For the same reason — the absence of any limitation to God’s will — human freedom must also be an offence against God’s omnipotence.

Reilly’s argument, very simply, is that the triumph of al-Ghazali and of the Asharite School ended the possibility of integrating philosophical reason and Islam for large numbers of Sunni Muslims. The line-by-line refutation of al-Ghazali’s The Incoherence of the Philosophers was made in The Incoherence of the Incoherence by Averroes in the twelfth century. Averroes’ reward was to have his books burned in the town square at Cordova in 1195. The victory of al-Ghazali was quickly followed by a simplification and a dogmatization of his views, first by Ibn Taymiyya and then by his Hanbali followers, including Abd al-Wahhab, the originator of Wahhabism, which inspires so many of the contemporary Islamists.

The most significant political consequence today of the ascendancy of the Asharites is, first of all, that democracy is rendered impossible for believers. This is less because Sharia is God’s law than because the prerequisite of democracy is the respectability of reason. “Otherwise,” Reilly asked “what could serve as its legitimating source?” The Thomistic syllogism Reilly employs is straightforward: without the possibility of secondary causes, there can be no natural law; without natural law, there can be no constitutional political order by which human beings, using reason, create laws to govern themselves and act freely.

By liberating divine omnipotence from the laws of causality, God was also liberated from rationality. A typical bit of theological policy-making along these lines would go something like this: the use of seatbelts is an affront to God because God alone wills the hour of our death. If that time has arrived, seatbelts will not save you; if your time is not up, using a seatbelt is unnecessary. Why, then, have a seatbelt law?

Freed from the constraints of cause and effect, things happen as if by magic; or rather, it becomes impossible to tell the difference between magic and God’s will. Supernatural forces, not a good aim and a steady hand, direct the bullet of a rifleman; in place of commonsensical accounts of political events, complex conspiracies rule the world. It is self-evident that science, including political science, is impossible. When the effort has been made to construct an “Islamic science” the results are both entirely predictable and utterly silly. Using Koranic quotations, for example, “Islamic scientists” attempt to deliver the chemical composition of djinns or the temperature of Hell (Reilly uncharacteristically fails to provide the information as to whether the temperature was calculated in degrees Fahrenheit or Celsius).

The contemporary consequences, which Reilly calls “The Wreckage,” are widely attested by Muslim thinkers. Just as some rabbis argued that the Holocaust was God’s punishment for not following His ways, some imams make the same kind of argument regarding the “wreckage.” It is a rebuke from God that can be corrected only by Islamism.

But just as Emil Fackenheim rejected the blasphemy of the Holocaust as punishment, Reilly argues that Islamism answers nothing. It is “a spiritual pathology based upon a theological deformation that has produced a dysfunctional culture.” Moreover, as Roger Scruton noted in his Foreword to the book, unless policy-makers understand they are dealing with a theological, philosophical, and spiritual problem, and not, for example a problem of economic inefficiency or social distress, their prescriptions are inevitably going to make matters worse. Such would be a recipe for even greater policy incoherence. Reilly provided an obvious analogy: “if someone had suggested that in order to deal with Nazism one first had to overcome the problem of poverty in Germany, they would be laughed out of school.”

More generally, if you believe in a magical world where everything operates by first causes, you will never have to bother yourself with the world and try to discover how it works. Islamism is as much a second reality in Eric Voegelin’s sense as the Thousand Year Reich or a Classless Society. Like those spiritual fantasies, it appears in the world with the recognizable face of totalitarianism.

Any remedy (if that is the right term) is one for Muslims to undertake. They alone can reconcile the unity of God with the unity of reason, much as Thomas did for twelfth-century Christianity. But as Voegelin once observed, the recovery of reason demands a new Thomas, not a neo-Thomist. How much more difficult to find a Muslim equivalent after so many centuries of Asharite irrationality. Most of us can see the parallel between Islamism and especially between militant Salafist jihadism and the totalitarian movements of twentieth-century Europe.

Most of us can see that Islamism is a perversion of Islam. Few however raise the next question, which has been explored in the case of deformations of Christianity by scholars such as Norman Cohn and Hans von Balthasar and, of course, by Voegelin: what was it in Islam that made such a perversion possible? Robert Reilly raises just that question and provides a clear answer in this splendid book.

How Far May the Bishops Go?