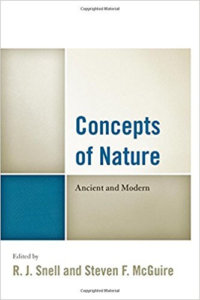 The word, “nature,” is a broad term, often used ambiguously due to the long history of debate over its possible meanings.  The ambiguous use of the term derives, too, from the fact that it has, from the beginning, functioned as a heuristic notion.  To speak of the nature of something is very often to identify an unknown “x” that further inquiry must bring to light.  Essays in this volume take up the question of nature and the meaning of the term, exploring conceptions that have dominated Western intellectual thought in the ancient, medieval, and modern periods. The collection does not merely survey these conceptions but brings them into debate and often interprets them through the eyes of later thinkers, such as Eric Voegelin, Leo Strauss, Bernard Lonergan, and Charles Taylor. For this reason, the scope of the book goes beyond the ancient and modern traditions to include 20th-century efforts by major thinkers to retrieve or reinterpret those traditions. Essays for the volume began as papers written for a conference organized by the Agora Institute for Civic Virtue and the Common Good, and each of them is paired with the comments of a respondent, retaining a sense of the original dialogue among presenters.

Any historical approach to the concept of nature does well to begin with Aristotle. In his approach to inquiry into the nature of things, Aristotle was focused particularly on the sources of motion and self-motion. To his mind this was the great unsolved problem from Platonic thinking.  Platonism made sense of the similarity among things through the notion of unchanging form, but could only account for the changeability of particulars by invoking of the idea of “participation,” which Aristotle considered a metaphor substituting for an explanation. When we speak, with Aristotle, of the nature of a thing, we have in mind not only the form but the inner characteristics that initiate motion or make it susceptible to particular types of external movers. Where instantiated objects, for Plato, held a constant relationship to the eternal through participation, Aristotle’s account sets up something of an autonomous intramundane realm of moving and self-moving entities, which comes to be called a realm of “nature.” Aristotle’s thinking here might be seen (and has, at times, been seen) as an immanentizaton of eternal order, but medieval thinkers, through meditation on the “cause of being” in things, found complete compatibility between Aristotelian hylomorphism and the dependence of every existing thing, at every moment, on the unchanging, divine ground of all changeable things.  But the question persists as to whether (in the terms that Anna Bonta Moreland uses in this volume) nature is a given or a gift.

The rise of modernity strengthened the former stance: nature as a self-explanatory given. Advances in empirical and mathematical sciences gave rise to a conception of a kind of “reason” that is confined to the immanent realm of nature—constrained by canons of empirical evidence, but thereby freed for exceptional expertise within that realm.  Progress in natural science strengthens the conviction that “reason alone” is the most assured means to truth.  To this conception of nature as a realm best served by natural science one must add the modern tendency to define “nature” as the non-specifically-human, including the non-rational and non-free aspects of the human person.  Ancient and medieval thinkers saw rationality as an essential force within the human psyche, lying at the core of human nature, establishing the human place within the order of creation, and grounding what Aristotle called the natural desire to know. Human nature was consonant and consubstantial with the whole of the cosmic order. But as nature becomes the object of rationality while excluding the subjectivity of the inquiring subject, humanity loses its integral place in the order of things, opening the door to interpretations of rational consciousness as an accident of a natural order that is indifferent to human glories and really interested only in the survival of species, and those only for a few moments of geological time.

The essays in the collection can be seen to cluster around these issues, and particularly, around questions of transcendence and immanence. All of the issues are at play, for example, in Glenn Hughes’s essay on human dignity and its response from Melissa Moschella. Hughes makes a Voegelinian case that human dignity originates in participation in transcendent value, that the very core of dignity is found in this openness to ground that is a unique power of human consciousness, shaping not only one’s sense of self-worth, but also the worth of others.  Moschella wonders whether a secular humanist respect for the uniqueness of human rationality could be recognized as an adequate, though incomplete, ground for this dignity.  Here, though, she is implicitly rejecting what Voegelin scholars mean by “reason.” As Hughes holds, and as Barry Cooper elaborates in his chapter on Voegelin’s reading of Aristotle on nature, reason itself, as a primordial experience of the cosmos and as a fundamental symbol, always had the character of an openness to the divine ground.  “Reason alone,” from this point of view, does not really have a meaning.  In Cooper’s account of Voegelin’s interpretation, the meaning that nous held for Plato was not basically altered in the shift to Aristotle’s metaphysics.  Human nature is defined by a potentiality for reasoning and for knowledge, with the normative implication that this potentiality ought to be realized.  “Natural law,” then, as it later came to be called, is not a set of precepts that are dictated by God or by the natural order, but is the finality of conscious rationality per se—what Voegelin calls being becoming luminous to itself.

Other authors in the collection pursue variations on the retrieval of nature as inclusive of humans, with a normativity deriving from divine origins. Hugo Grotius was a contemporary of Descartes, Hobbes, Newton, and Leibniz, but Jeremy Seth Geddert finds in him a theory that is less modern than classically Aristotelian and Christian.  While Grotius acknowledges the role of history in shaping human nature and even entertains the “impious hypothesis” that non-believers could know, through reason, the natural law, still that natural law is embedded in the world because the world is God’s creation.  Geddert’s respondent, Jesse Covington, suggests that one can stipulate this interpretation of Grotius’s Aristotelianism while yet noting that the possibility of grasping natural law without reference to the divine constitutes a step toward an immanent conception of reason and nature.

James Stoner is another contributor who embraces Aristotelian and Thomist ideas regarding natural law, seeing them as compatible with a natural science shorn of anti-metaphysical bias. Stoner’s emphasis, however, is on the continued relevance of natural law in the ordering of human communities, including the sorting out of such dilemmas as the inclination toward the exchange of goods and the formation of cities.  Bernard Lonergan would seem to be the representative of this kind of position par excellence, given the depth of his efforts to rethink the whole of twentieth-century scientific and social advances in ways more compatible with Aristotelian and medieval authors than with the reductionism and positivism of influential Enlightenment thinkers.  Randall Rosenberg explores the reinterpretation of the Aristotelian and scholastic traditions in Lonergan’s account of the desire to know, understood in the Thomist meaning of the desire to know God by God’s essence.  The vertical finality that Lonergan finds in both human inquiry and natural process correlates well to the Voegelinian conviction that reason does not stand on its own but is, by definition, a relationship to the ultimate unknown.  Rosenberg affirms Lonergan’s natural theology in principle, but holds that the more Augustinian, more values-based approach that Lonergan takes in his later works may be the more convincing one in what Charles Taylor has called “a secular age.”

If sympathizers with ancient and medieval wisdom seem to dominate the discussion here, there are yet those who counter it.  Susan Meld Shell reads Rousseau’s account of nature as wholly within the modern purview—normative reason as an autonomous virtue and normative sentiment as a natural given. Shell sees Rousseau, then, as compatible with multiple metaphysical systems, and from the modern point of view this is a strength.  In his account of the social thought of H.G. Wells, author Charles T. Rubin finds a modern thinker who has essentially replaced the normativity of nature with the normativity of historical progress.  He offers, however, Chesterton’s classical challenge to this faith in progress: the very conception of progress must assume moral criteria that rank it as progress rather than decline.  Louis Dupré is introduced by Fr. Stephen Fields as another sympathizer with the aims of modernity—not a champion of modernity exactly, but one who regards the project of modernity as unfinished and its promise of freedom as yet to be realized.  In this chapter, however, the author criticizes his subject for perhaps going along too easily with the immanentism of modern rationalism.  For Fields, Dupré would do well to bear in mind the necessity of transcendent grace for the realization of all creativity and freedom.

While these authors, then, bring a variety of perspectives and subjects into view, one can readily say that the central concerns of Voegelin scholars are present throughout the volume, even where authors are not directly addressing Voegelin’s formulation or show little familiarity with Voegelin.  It is a fine example of Voegelin scholars engaging with a range of academic voices, and on a perennial topic of crucial philosophical and historical importance.

Paul Kidder is a Professor of Philosophy and Director of the Honors Program at Seattle University. He has published articles on Bernard Lonergan, metaphysics, aesthetics, and urban studies.

New Political Religions, or An Analysis of Modern Terrorism