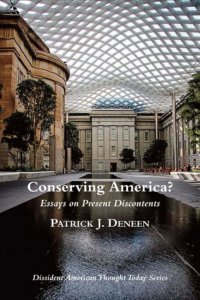 The current political polarization in the country today can be characterized as the Political Left calling for cultural liberation in the form of identity and sexual politics and the Political Right demanding the economic liberation of the free market. Whereas the Left believes that government, whether national or transnational, can provide hope and change, the Right appeals to principles of limited government, traditional family values, and the marketplace to make America great again. But in Patrick J. Deneen’s book – Conserving America? – this political struggle is a “false choice [that] is embedded deep within American philosophic principles” (3).

The real debate that Americans should be having is not between the Left and the Right but between liberalism and some other philosophy that Americans could adopt. For Deneen, both the Left and the Right are guilty of a depersonalized and abstract liberalism that allows them to advocate statism and individualism respectively. Both the state and the market require individuals to be denuded of their particular families, friendships, and communities so they can be governed more effectively and efficiently. Our political debate is about means instead of ends: which one of these entities – the state or the market – should govern but with no explanation for what purpose. Deneen wants us to return to the question of ends, even if this means a fundamental questioning of liberalism and the American Founding itself.

Deneen turns to Tocqueville to see how we can revive a culture “of sustainable practices and defensible ways of life born of shared experience, memory, and trust” (11). But this revival requires reinvention and new beginnings that depart from the philosophical principles of the American Founding. In a series of essays that he had delivered to the public, Deneen searches for practices and values in American life that can re-found the nation on principles different from liberalism. The hope is that he will find something worth conserving in American life, principles that ordinary citizens practice but fail to articulate and consequently are ignored or neglected by scholars.

The first four chapters of Conserving America illuminates some of these principles that may be an alternative to liberalism. In “Patriotic Vision: At Home in a World Made Strange,” Deneen shows that the original purpose of political theory is not to be skeptical of patriotism but rather to treasure the community’s traditions. The theorist ventures outside one’s polis to learn how other communities organize their lives as part of one’s patriotic duty: the theorist is to learn what could be glean from these other communities for the theorist’s own polis because he or she wants to renew citizens’ love for their own city. The political theorist therefore is the most thoughtful and most patriotic of all the citizens in his or her community.

Besides patriotism, honor also is required for political life to exist. But in democracies, honor is difficult to discern, as democratic citizens want to honor what is extraordinary rather than what is ordinary. In his chapter, “Ordinary Virtue,” Deneen describes the dedication of Robert Gould Shaw and the 54th regiment at Boston Commons where William James points out that it was Shaw’s decision to command the 54th black infantry in the Civil War instead remaining in the Massachusetts 2nd that was more praiseworthy than his death in battle. What should be honored is not the “extraordinary” virtue of military bravery but the willingness to sacrifice one’s honor and reputation in the eyes of one’s peers. This type of civic courage, a willingness to sacrifice one’s honor in society, is rare but required for democracies to sustain themselves.

Without virtues like patriotism and honor, democratic citizens will withdraw from public life and dream of a life of infinite possibilities, or, as Deneen calls it, “the dream of escape.” In “Awaking from the American Dream,” Deneen analyzes It’s a Wonderful Life, Avalon, and American Beauty to show how the protagonists in these films try to escape from their current lives in the hope of a better future. The characters in these films are typical of the restless Americans of which Tocqueville speaks, pursuing material prosperity yet never content with it. In “Citizenship as a Vocation,” Deneen calls for a return to the idea of vocation in our understanding of citizenship to cure Americans of their restlessness and their dreams of escape. By accepting the responsibilities of democratic citizenships, Americans will truly become self-sufficient and thereby discover the true definition of freedom as a choice to act for the public good.

The next set of chapters examines whether there is anything worthwhile to conserve in America. In “Manners and Morals,” Deneen examines the formlessness of American life by focusing on the country’s lack of manners and decent food. For instance, America’s culinary contribution to the world is food that does not require utensils – pizza, hot dogs, burgers, the ice cream cone – which usually is a mark of civilized behavior. This tendency for abstraction combined with the lack of form provide Americans several ideological choices to organize their lives, as Deneen outlines in “Progress and Memory.” Americans can be liberal (live in the present), progressive (live in the future), nostalgic (live in the past), or conservative (live in the past, present, and future).

For Deneen, conservatism is the preferred option, but he presents an account that differs from the abstract ideology that exists in today’s politics. In “What is Conservatism?” Deneen argues that conservatism is 1) based on a conception of the common good; 2) requires aristocratic formalities of the past that are tension with the democratic desire for equality; 3) accepts the naturalness of culture; and 4) thinks generationally by linking the past, present, and future together. In “Is There a Conservative Tradition in America?” Deneen shows how contemporary conservative ideology is really a form of liberalism; thus, Americans are confronted with either conservative liberalism or progressive liberalism. Both ideologies distrust the past, eschew cultural and social bonds, and favor abstract political programs, whether the market or the state. Given these two choices, it is hard, if not outright impossible, to be a conservative in America as Deneen understands it because it is not part of the fabric of the American political life.

The last set of essays in the book examines the future of America. In the spirit of Alasdair MacIntyre’s work, After Virtue, Deneen’s chapters – “Community and Liberty OR Individualism and Statism” and “After Liberalism” – offer Americans a choice of conservatism (community and liberty) or liberalism, whether conservative or progressive (the individualism of the market or the statism of politics). This is the choice with which Americans should be confronted: not the left-right ideological divide but liberalism or something else (i.e., Deneen’s understanding of conservatism). But can this alternative, conservatism, re-found the nation on principles different from liberalism so Americans can learn to rule and be ruled in turn, as Deneen calls for in “The Future of American Democracy”? Can conservatism emerge as a genuine alternative to liberal philosophy; and if so, can it accomplish it on the scale where liberalism has succeeded? Can conservatism be a national governing philosophy or is it by is nature only suitable for local communities? And if it can only be a principle for local organization, then how does a genuine national alternative to the abstract ideologies of liberalism, progressivism, and nostalgism emerge? As someone sympathetic to Deneen’s analysis of America, I pose these questions as a friend, wondering whether his proposal of conservatism is a genuine possibility for renewing American democratic life or another version of the Benedict option to leave liberal society altogether.

By examining whether there is anything worth preserving in America, Conserving America does a significant public service. Deneen provides Americans a way to re-think about politics not as a contest of ideologies of the market and the state but a choice of alternatives between community and individualism. What the reader will find is that there are values in American life that transcend its liberal founding – patriotism, honor, liberty – and can reorient American democratic life where a common good can be recovered by its citizens. For those who interested in the American Founding and for those who care about the current state of the American polity, Conserving America is a must-read, a book that is both timely and timeless in its analysis and prescription.

A Citizen Legislature: Curing the Disorders of the Age?

Cowboy Politics: Myths and Discourses in Popular Westerns from The Virginian to Unforgiven and Deadwood

Bureaucracy in America: The Administrative State’s Challenge to Constitutional Government