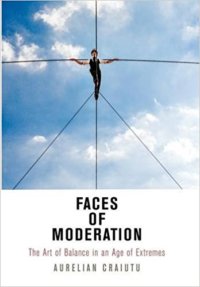 Faces of Moderation: The Art of Balance in the Age of Extremes. Aurelian Craiutu. University of Pennsylvania, Philadelphia, 2017.

Aurelian Craiutu is a political theorist and historian of ideas who has made the study of moderation the guiding thread of his intellectual project. Born in totalitarian Romania, he experienced firsthand both the evils of Manicheanism and ideological thinking and, consequently, the need for balance and sobriety in political life and reflection. He is an outstanding specialist of nineteenth century French political thought. In a series of excellent books, Craiutu has drawn on the wisdom of a diverse group of French thinkers from Montesquieu and Guizot to Tocqueville and Remusat who attempted to defend the most sober versions of modern liberty. In 2006, he published a book in Romanian entitled In Praise of Moderation which broadened his project to defend and articulate a tradition of moderation beginning with that great avatar of political responsibility, Aristotle. His 2012 book, A Virtue for Courageous Minds: Moderation in French Political Thought, 1748-1830, ended with a chapter-length “Decalogue of Moderation” that explored what Craiutu calls the “complexity, difficulty, and richness of this virtue.” Faces of Moderation: The Art of Balance in the Age of Extremes picks up that exploration with clarity, grace, and impressive learning. In its pages, Craiutu examines five twentieth century figures, a Frenchman, two Englishman, an Italian and a Pole with ancillary treatments of other partisans of moderation. All were unequivocal opponents of “extremism and fanaticism in all its forms” and each pleaded for moderation, civility, and dialogue. Craiutu’s portraits are deftly drawn and that is, perhaps, the greatest virtue of his book. But the significant differences among these figures remain insufficiently explored.

In a beautiful passage near the beginning of the book, Craiutu eloquently captures the transvaluation of values in the age of ideology with the help of the great Albert Camus. In the twentieth century, those infected with ideological fanaticism saw moderation as “a cloak for pusillanimity” and drew dark political conclusions. Craiutu cites Camus’s The Rebel to highlight “the dark side of the past century,” when one witnessed “slave camps under the flag of freedom, massacres justified by philanthropy or the taste for the superhuman.” Against this assault on moderation, moral clarity, and good sense, Craiutu appeals to a tough-mined liberalism, open to conservative insights. With the Italian liberal socialist Norberto Bobbio, one of his exemplary moderates, Craiutu argues that the moral progress of human beings rarely keeps up with the march of economic, political, and technological power. This is, of course, a fundamentally classical or conservative insight. It is always a mistake to conflate technological progress with some permanent transformation and improvement of the human soul.

Craiutu’s best drawn portrait is of the French conservative liberal Raymond Aron, who never ceased to defend Western civilization on both liberal and conservative grounds. In his June 1939 speech to the Societé française de philosophie in Paris, Aron drew a penetrating contrast between democratic and totalitarian states. He opposed pacifism, emphasized the need to recover the full range of civic and martial virtues, and pleaded with his compatriots to “conserve” the best of the Western and democratic traditions. In May 1968, Aron, a forceful advocate of the reform of an increasingly sclerotic French university, opposed the antinomian Left as it assaulted the liberal university and de Gaulle’s Fifth French Republic, a regime he believed worthy of defense. At the end of his life, he spoke about the “moral crisis” of the Western democracies where civic virtues were thoughtlessly abandoned in the name of generalized hedonism and radical individualism. Aron defended authority but never authoritarianism. And, of course, Aron, who read Marx carefully and not without some sympathy, was the scourge of the “Marxist vulgate” and the “opium of the intellectuals.” His moderation had a conservative cast (although Craiutu at times tries too hard to save him from conservatism). Aron also worried that freedom, a noble ideal, had degenerated into a groundless decisionism that was coextensive with nihilism. By the end of his life, Aron was just as much an opponent of postmodern relativism as he had been of totalitarian fanaticism and extremism. Contra Weber, whom he did so much to introduce into France, Aron did not believe in “axiological neutrality” or the inability of reason to adjudicate between moderation and fanaticism, civilization and barbarism. In Leo Strauss’s words, Aron aimed to reconnect wisdom and moderation and to bring a fighting spirit to a liberalism that could defend itself with courage and honor against totalitarianism and nihilism. Aron represents that spirited and conservative-minded liberalism heralded by the Romanian Nicolae Steinhardt who in 1937 insisted that liberals needed “strong convictions” and even a willingness to use violence against those determined to destroy civilization. There is nothing tepid, fearful, or relativistic about such tough-minded liberalism. It leans toward conservatism (without simply being conservative) since it aims to conserve the patrimony of civilization.

Craiutu’s portraits of Isaiah Berlin and Michael Oakeshott are intelligent and altogether respectful. It is hard not to admire Berlin’s critique of historical determinism or his great portraits of Churchill in 1940 or of the Russian writers Anna Akhmatova or Boris Pasternak under the Stalinist juggernaut. These are masterpieces in their own right. But Craiutu simply accepts Berlin’s unexamined claim that he is a “pluralist” and not a “relativist.” No doubt, Berlin saw the ugly consequences of a thoroughgoing relativism and wished to avoid it. But he had an excessively weak conception of reason since it seemed altogether powerless to say much of anything about the choice-worthy character of various human ends and purposes. He went much further in a relativistic direction than Aron (especially the later Aron) and was more or less insensitive to the “moral crisis” unfolding all around him.

Likewise, Craiutu expertly traces Oakeshott’s critique of a tyrannically instrumental rationality (“rationalism”) and his elegant defense of a civil association that allows law-abiding men and women to pursue myriad human projects. Oakeshott’s was an enduring contribution and he wrote as only a civilized man could write. But Oakeshott’s abrupt dismissal of any connection between conservatism and religion seems to be rooted in a radical conventionalism that opts for tradition rather than antinomianism through an act of will. Oakeshott is a traditionalist, if he is a traditionalist, because we have nothing but tradition to rely upon. Convention goes all the way down. Craiutu acknowledges that Oakeshott “was aware of the relativity of his own views.” Craiutu speculates that today he would be comfortable with anti-foundationalism since no true foundations can be found for our beliefs in “philosophy, art, religion, or politics.” Here, Oakeshott sounds like a more conservative-minded Richard Rorty.

I’m afraid that Craiutu is so worried about the dangers of monism and “black-and-white-contrasts” that he forgets that the assault on the very distinction between truth and falsehood, good and evil, is at the heart of twentieth-century totalitarianism. Havel and Solzhenitsyn gave it a name: the ideological Lie. Craiutu greatly admires the Polish philosopher Leszek Kolakowski, the greatest liberal critic of Marxism in the twentieth century, but is perplexed that he ended close to Pope John Paul II near the end of his life. But perhaps liberalism needs the “conservative foundations,” rooted in reason and revelation, that it is not very good at renewing or sustaining. One needs to be skeptical about ideological abstractions but not about the fundamental and primordial distinctions between truth and falsehood and good and evil. Such skepticism leads to the abyss and only validates the immoderation of ideologues and fanatics. Skepticism can turn on moderation and can become an instrument of a nihilism that erodes meaningful moral and political distinctions. This, too, is a lesson of the twentieth century—and the twenty-first.

My impression is that Bobbio’s liberal socialism was never a viable political option. Early on, he expected too much from dialogue with Communists who refused dialogue in principle. Yet, his defense of mitezza (meekness) is the other side of the coin from Aron’s and Steinhardt’s admirable and spirited defense of liberal and Western civilization. Modesty has its place and should not automatically be confused with relativism or excessive self-doubt. One cannot help but be impressed by Bobbio’s decency and his repudiation of all the fanaticisms that did so much to fray the civic bonds in western societies. A self-declared “liberal socialist,” Bobbio also knew that the humane left must defend modern liberty against “overzealous progressives, from the liberty of subsequent generations.” There is great insight in that formulation, a reminder that liberty too can become immoderate and unduly “progressive.”

I am most ambivalent about Craiutu’s last exemplar of moderation, the Polish dissident and journalist Adam Michnik. He courageously fought the Communist dictatorship in Poland and promoted much-needed dialogue between left-leaning intellectuals and the Church. But he had little sympathy for the deepest concerns of traditional Poland and opposed lustration, or any serious effort to hold Communists to account for their tyranny and to weed them out of government. In the 1990s, he became General Jaruzelski’s friend, all in the name of misplaced moderation. Today, Catholic Poland has returned to her old religious and national traditions, and has restarted a lustration policy that might have been better applied in the 1990s. And I must confess that I am not impressed by Michnik’s friendship with Danny Cohn-Bendit, the mastermind behind the May events in Paris in 1968. Michnik could only see Cohn-Bendit as a fellow antiauthoritarian. What would Aron or Steinhardt say about a liberalism that cannot distinguish between legitimate authority and a misplaced authoritarianism?

At its best, Faces of Moderation makes an excellent case for moderation as a “cardinal virtue related to civility, self-control, equipoise, temperance, and prudence.” Many of Craiutu’s portraits support such a judgment. But Craiutu never really distinguishes between the moderation of an Aristotle and Burke (for surely they were moderates) and the “moderation” of those who fail to respond with courage and determination to “the culture of repudiation” (the phrase is Roger Scruton’s) all around us. Does moderation need to move ever more Left, accommodating postfoundationalism, relativism, and the culture of repudiation, all in the name of avoiding “moral absolutism”?  Or does it defend the prerequisites of civilization with courage and lucidity, finding a middle path between moral zealotry and moral relativism? This was Aron’s path, and a path worthy of emulation. All of these questions come to the mind of the reader of Aurelian Craiutu’s most thoughtful and welcome book.

Daniel J. Mahoney is a Board Member of VoegelinView and holds the Augustine Chair in Distinguished Scholarship at Assumption College in Massachusetts. He is the author of The Liberal Political Science of Raymond Aron (Rowman & Littlefield, 1992); The Conservative Foundations of the Liberal Order (ISI, 2011); The Other Solzhenitsyn (St. Augustine's Press, 2014); and The Humanitarian Subversion of Christianity: Why the Christian Religion is Not the Religion of Humanity (Encounter Books, forthcoming).

The Fool of New York City

A Good Look at Evil

Review of Imagination and Environmental Political Thought: The Aftermath of Thoreau