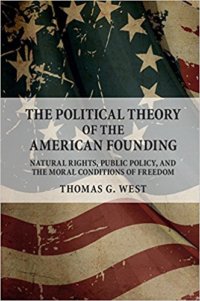 Thomas G. West is the Paul Ermine Potter and Dawn Tibbets Potter Professor of Politics at Hillsdale College, where he teaches American Government and Political Philosophy. He has long been one of the nation’s foremost experts on the American founding, and with this book he arguably becomes the foremost expert. Scholars of the American regime have proposed a number of explanations for the founding. Some claim that the founders were early-modern liberals. Others argue that the founders were primarily exponents of republicanism. Still others claim that the founders bequeathed to us an amalgam of these two strains of thought, together perhaps with still other influences. West’s great ambition with this book, one that he achieves, is to show that in their self-understanding the founders grounded the American regime on natural law and natural rights, and sought to promote virtue, and in particular the virtues necessary to a self-governing people seeking to secure their natural rights. The combination of natural rights and virtue promoted by the founders does not come from two separate streams of thought. Rather, natural rights and virtue are, so to speak, two sides of the same coin.

West marshals a great deal of primary source evidence for his argument. The type of evidence he presents is crucial to his argument. He relies heavily on official documents of the period so that he can present the consensus view of the political actors, and not the particular or peculiar views of individuals. One might say that he aims at presenting a national intellectual biography rather than a set of individual intellectual biographies. To be sure, he also draws on the thought of many individual founders. But he does so in order to supplement and illuminate rather than substitute for a more common, national understanding.

In the first part of the book, West argues that “[t]he natural rights doctrine – including the concepts of equality, the laws of nature, and the social compact basis of government – is the core of the founders’ political theory.” (19) In the second part of the book, West claims that “the founders shared a serious concern for morality, and . . . they wanted government to promote it – insofar as it is integral to establishing and sustaining political liberty – securing the people’s natural rights on the basis of consent.” (165) The final section describes the founders’ views on property and economics. West presents them as broadly capitalist. The founders believed that economic liberty secures the common good for both rich and poor alike. In particular, economic liberty permits ordinary people to gain property and secure their material well-being. At the same time, West argues that the founders were not libertarians. The founders understood that economic liberty requires an active role for government, for example, in defending property rights, advancing police power regulations, and perhaps even legislating foreign trade protectionism.

Throughout the book, West corrects the misinterpretations of the founding and the founders that have come to us from a range of scholars. For the most part, he challenges conservative scholars (although some liberals also come in for criticism). The most significant misinterpretation that he corrects is the belief that the founding forces conservatives to choose between natural rights and virtue. The strong tendency among conservatives is to choose virtue over natural rights, or what is high and noble over what is low and suspiciously modern. In the view of many conservatives, human life must be understood in terms of its ends, and those ends require a central place in politics for virtue grounded in either classical political philosophy or revelation. They are suspicious of a regime of natural rights, seeing it as grounded in the passions, or on what is subhuman rather than on human ends. West demonstrates the deep connection in the thought of the founders between natural rights and virtue. A regime of natural rights requires a particular type of citizen: one who displays a range of virtues that make him capable of living freely. To put this argument another way, the moral conditions of freedom are essential to freedom, and therefore must be promoted by a regime devoted to freedom. The founders understood this, argued this, and encoded this in official documents and laws. West readily acknowledges that America has undergone a moral decline since the founding. But he argues that this moral decline is a departure from the moral and political requirements of the founding, and not, as some conservatives believe, a moral and political fulfilment of intellectual defects present in the natural rights teaching of the founders.

If conservatives come to accept West’s key argument connecting natural rights and virtue, he might succeed in bringing about an intellectual reconfiguration on the Right. The Right’s divisions on the question of the founding have pitted paleoconservatives, libertarians, neoconservatives, and East and West Coast Straussians against each other. In particular, paleoconservatives and East Coast Straussians might come to see that the contemporary flight from virtue is a corruption of the founding principles, and that a return to natural rights, properly understood, carries with it a necessary return to virtue. We can be sure that many libertarians will continue to reject attempts to “legislate virtue.” But some might come to see that licentious men are not truly free, and that a public concern with virtue is compatible with and indeed essential to the freedom to choose our own goals in life.

If conservatives can gain a new unity and renewed intellectual strength from this book, West will have set the intellectual stage for the next great task facing friends of liberty: a comprehensive philosophical investigation of the truth of the principles of the founding (12). That task will require not just evaluating the founding principles, but also their great competitors in our day: historicist progressivism and postmodernism. An intellectual victory in that task promises to bring contemporary liberals into the ranks of liberty’s defenders. The stage would then be set for a grand, national political realignment. America could advance beyond the Left-Right disputes of the last century, to a happier political culture in which our two main parties compete to see which one can better secure our natural rights and the moral conditions of freedom. In fact, that happier political culture would be something of a return to pre-Progressive Era America.

These are heady possibilities, and we must be cautious about hoping for too much from politics. But we must also be cautious about hoping for too little. West’s book advances us a great distance toward that better future. He is to be commended for his achievement. It is now the task of every scholar who would pronounce on American politics, regardless of his discipline, to read this book with an open and critical mind.

Secondhand Time: The Last of the Soviets

The Origins and Nature of the Academy