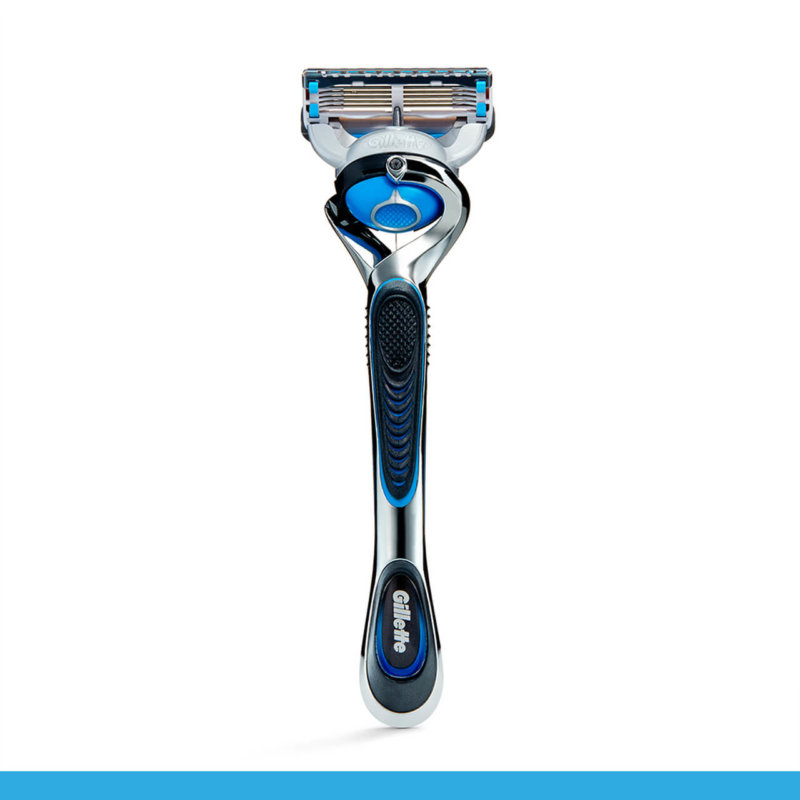 The break-up was surprisingly easy after nineteen years. We’d met at my brother’s wedding when I was currently unattached, and I was hooked immediately. Even now I can feel the first grazing of my cheek and the sensation afterward—I felt clean, younger, more alive. Shortly afterward I decided, with no qualms at all about the expense, that I wanted our relationship to be permanent. And once I had decided, I was faithful over those years. I had no temptations to go elsewhere. But last week I decided that I needed a change, so I found something new.

Of course I’m talking about my ex-razor, the Gillette Mach 3.

Though some people complained about the cost, I was perfectly happy with it, buying those packages of replacement blades every once in a while. My beard, alas, isn’t that thick (I still hear my late Aunt Deane saying of my yearly winter beard, “Oh, that moth-eaten thing!”), so I made the blades last long enough that the price wasn’t onerous. But this time when I ran out of blades, I decided to buy a Schick.

Why is this important? Well, if I had just found a better razor, it might not be worth a column. But I divorced the Mach 3 not for reasons of the best shave, but because of irritation with Gillette.

In January Gillette gained a degree of notoriety for a two-minute ad (a “short film”) they released titled “We Believe: The Best a Man Can Be.”[1] The ad was a several-minute-long scolding look at “toxic masculinity” that focused on bullying boys and leering men, strangely at one point implying that a row of men grilling in the summer was somehow an icon of male evil. In and of itself, the topics taken on weren’t necessarily bad, though I might add that the idea that grown-ups letting boys fight without interference is toxic is a little deluded. Sometimes boys need to learn how to negotiate their disputes, sometimes they need to be interfered with.

Some conservative women like Serena Sigillito at Public Discourse and Mona Charen at NRO argued that those who were upset with the ad were deluded because by criticizing the ad they were now put in the position of defending bullying and sexual harassment.[2] We should, Charen argued, “applaud that aspect of the Gillette message.” Of course, those who criticized the ad were making no such defense. They were simply pointing out that advertising focusing on the supposed faults of one group and telling them to do better were offensive. Although Sigillito and Charen made the point that the ads don’t quite identify “toxic masculinity” with masculinity per se, it’s hard for me to understand how the ad wouldn’t be seen as an attack on men, especially when it was revealed that a feminist director—a woman whose previous work included an ad in which a soccer-playing female declares, “I kick balls. Get over it!”—was responsible for it.[3] Imagine a male director creating an ad for a product aimed at women that showed “Mean Girls” behavior or women getting their way by using feminine wiles and then telling women not to be so toxic. In such a case, the Maoist struggle sessions and apologies from the director and company spokespersons would have been immediate. In this case, however, ridicule from Twitter and conservative media produced only the digging in of heels on the part of the company.

Those who warned that Gillette was pushing an unhealthy narrative were given the dubious privilege of being proven right about who was deluded when in May Gillette released an ad depicting a father teaching his transgender son (a young girl who is “transitioning”) how to shave.[4]

The end result is that many people like me, whose attachment to our razor potentially meant purchases in perpetuity, stood athwart the bathroom mirror and yelled, “Stop!” Thus in July, though Reuters reported that Proctor and Gamble, Gillette’s parent company, beat Wall Street expectations this spring, this was despite the company taking an $8 billion non-cash write-down on Gillette itself.[5] The responses from corporate flacks were somewhat predictable, pointing out 1) that the male grooming business has been declining for almost three years, and thus we should pay no attention to the feminist director behind the curtain, and 2) that there is a lot of competition from other companies with cheaper blades. This was just the result of a trend. No doubt there is something true about both answers, but the idea that the sudden 10-figure write-down was not attributable to consumer response was contradicted by Gillette’s CEO when he admitted that the marketing campaign, which was to connect younger people with Gillette, had severely backfired.[6] “The worst thing during through that period was, we also lost connection with the millennial generation. Gillette quickly became the brand of the millennial generation’s dads.” I’m not sure it actually became that, but it’s an intriguing admission of failure.

And it’s a hopeful sign, too. As a person who is sold on the notion that free markets are the best way for society to meet its needs and wants, I often cringe a bit when I hear people say, “Let the markets decide.” Now, as a question of which kinds of business ought to succeed—which razors are the best product for the best price—I am unequivocally in favor of this position. Bernie Sanders famously complained about the unfairness of a society in which some have needs and yet we can choose between 23 kinds of deodorant. I’ve never been able to see the point of this comment. I’d be happy to have 2,023 deodorants for people to choose from. Let a thousand armpits bloom! Or not bloom, I suppose. The possibility of body odor entrepreneurs suggests a society rich enough to be creative about social problems. I certainly don’t favor the heavy hand of government regulation for determining the correct number and kind of roll-ons. Let the market decide!

Nor am I exactly in favor of government regulation from the standpoint of regulation of speech or currently legal actions on the part of corporations. However, the power of corporations, particularly those in social media and tech industry, to promote destructive behaviors and ideals through having near monopolies has raised the hackles of many in the conservative world. Lawsuits against Google and other companies have begun to be filed, for instance by Dennis Prager’s Prager University, for banning Prager videos or rendering them unavailable to children for rather specious reasons. Others have suggested stronger remedies, such as breaking up the big tech companies, most notably Glenn Reynolds.[7]

I am not absolutely sure whether a break-up or some other form of regulation will do the trick. But I’m open to them. Yet in a recent conversation with a libertarian journalist, I was accused of being too willing to resort to government measures. The market will work it out, I was told. I sincerely hope that’s true, but such language is a reminder that the market is not a “thing” but the process whereby people actually express their preferences and their desires by making decisions about buying and selling. Like democracy, the market depends upon thoughtful people making choices—especially to not empower those who would inappropriately limit their ability to speak the truth or make choices for the good. Some will object that what I’m suggesting is a boycott of products based on the political views of the companies. They’ll say that to get along in a pluralistic society we ought to make decisions based solely on the product. When companies kept their politics to themselves, that was a more sensible position.

I frankly want people to keep doing business with people whose morals and politics are different from their own when possible. But when companies use their power and their marketing to shut down voices of sanity and to promote unhealthy views (e.g., of what it means to be male or female), we can no longer simply evaluate the product. It behooves us to think about what kind of consumer options we have to support companies that, if not exactly for our side culturally or morally, are at least not against us. Maybe announcing a boycott of companies is unwise (especially if we don’t know how many will support it—such a show of weakness could embolden companies to continue their moral cultural assaults). But making choices based not only on whether we like a product but on what the company is doing seems only sensible and right.

Economic pressure on Gillette (or Facebook or Google, by not using them as much) might convince those companies to back off politically and culturally. If so, the difficult questions about how to restrain them within the constraints of economic, political, and legal prudence may be put off.

I’m all for letting the markets decide a lot of things, but with the proviso that in the market I’m a decider. And my decisions in the market place don’t just affect what kinds of razors or apps are developed, but also what kind of messages and influence the companies that make them will send and exert. Those decisions might help us continue getting a close shave—and help our culture make one too.

This was originally published with the same title in The Imaginative Conservative on August 13, 2019.

The Quest(ion) of Literary Form