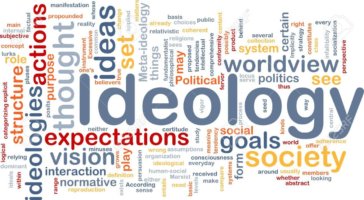 Ideology is a highly misunderstood concept.  People use it all the time to describe what, or more precisely, how they think despite the fact that they may not actually be engaged in the theoretical or practical application of ideology.  By doing this, they are unwittingly giving ideology power that it doesn’t deserve, and the word itself becomes a reality every single time it’s used in a positive sense.  But this is only a minor part of the problem we face when it comes to ideology. Whether criticized or admired, ideology is almost always used in a political context.  It represents either a government, a regime, a political party, or politics in general.  Those reflections, however important, remain on the surface and end up merely describing current political events, and barely get to the heart of the matter – namely, ideology’s definition.

Although, by no means am I attempting to absolutely and once-and-for-all define ideology, I would like to illuminate certain aspects of it that tend to be neglected.  We have to ask what are some of the roots of ideology and what is its most basic mover.  Ideology certainly affects the public sphere of life, but my claims and explorations are more interested in how ideology affects the private sphere of life.  How is an individual’s life affected and changed if he allows ideology to seep into his interior life?

One of the ways that ideology inserts itself into the lives of people is by masquerading as a system, which is fundamentally metaphysical.  In other words, it pretends to be philosophy when it’s anything but.  Philosophy, at its core, is interested in truth, in what is good or evil, in what makes life worth living, and in beauty, among other numerous questions.  One aspect that consistently drives these questions is the freedom to ask such questions that every human being possesses.  The freedom is based on the fact that we reflect, deliberate, and have inherent human dignity.  This is precisely the opposite in the case of ideology because it is a coercion of truth.  In fact, ideology’s entire raison d’etre is coercion of the individual and annihilation of free will.

First and foremost, ideology uses psychological tactics and works on the principle of deception followed by disorientation.  Secondly, it reduces a human being to a static political entity without interior life and familial connections or relations to the community, thereby denying the complexity of being.  This reduction of an individual’s existential self totalizes him into a series of haphazard parts that deny the order of things (first and second attributes often times overlap).  Thirdly, ideology promises perfection, utopia, and an absolute cure for all of the ailments of our society.  Let us examine each of the three attributes of ideology.

Deception, by its very essence, depends on the creation of illusion.  It denies the present reality and creates an alternate past by erasing histories that don’t suit an ideological cause du jour.  But it isn’t just a mere illusion.  Illusions, sometimes, have a function of speaking a larger truth about our society.  The ideological illusion is a lie.

One of these deceptions is ideology’s claim that it involves critical thinking and philosophical analysis.  This claim immediately disorients an observer who is trying to understand the world and his place in it.  Although Eric Voegelin does not refer to ideology literally in his work Science, Politics, and Gnosticism, his discussion and criticism of gnostic thought and its impact on the political world remains quite relevant today.  In particular, Voegelin’s delineations between truth seeking discourse and as he calls it a “prohibition of questions” (Science, Politics and Gnosticism, 17) illuminate the crucial structural difference between philosophy and ideology.

Referring to Platonic-Aristotelian analysis, Voegelin writes: “Its aim is knowledge of the order of being, of the levels of hierarchy of being and their interrelationships, of the essential structure of the realms of being, and especially of human nature and its place in the totality of being.  Analysis, therefore, is scientific and leads to a science of order through the fact that, and insofar as, it is ontologically oriented” (Science, Politics and Gnosticism, 13).  The key phrase here is “ontologically oriented,” which means that the act of thinking as explained by Voegelin is inextricably connected to the entirety of being.  Not only that, but its aim is to gain insight into who we are, which will inevitably lead us to ask ethical questions as well.

According to Voegelin, “Only when the order of being as a whole, onto its origin in transcendent being, comes into view, can the analysis be undertaken with any hope of success; for only then can current opinions about right order be examined as to their agreement with the order of being” (Science, Politics and Gnosticism, 14).  What Voegelin is brilliantly pointing out is that there is a hierarchy of being – not only an individual being but also one which is beyond being.  How can politics even exist and be functional if a hierarchy is intellectually disregarded?

Ideology’s main concern is to gain power and in order to do that, it will deny the individual constitution of a human being.  This is why the first attribute (deception) and second attribute (reduction of human being to a political entity) are related to each other.  Voegelin discusses the obsession of power in his reference to Nietzsche’s “will to power” and libido dominandi, which continuously creates what Nietzsche himself called, in The Birth of Tragedy, a “duplication of masks.”  An ideologue deceives but the person being deceived is also called into question and bears some responsibility in this relation of power.  Voegelin insists that we do indeed have a choice to go against this deception or let ourselves disappear, ontologically speaking.  Otherwise, just like Nietzsche’s masks that keep duplicating, so do lies, which in ideology tend to become part of a public sphere reality.  The philosophical problem before us, however, is how can a lie become a lived-in reality?

An ideologue’s first move, as we have seen, is to deceive.  The disorientation which ensues is inevitable.  Any thought of ordered cosmos an individual may have had disappears and is replaced by an unnatural state of being, which mostly involves a lack of questioning on the part of the person who was deceived and disoriented.  But in order to do that, an ideologue is determined to dehumanize his subject (which has in essence become an object) and force him into an existence that follows a dictum of the collective.  The only option is to derive his identity from a particular group that prizes relativism and the good of the collective over the good of an individual.  In other words, he is prohibited to ask questions, as Voegelin concludes.

But that is not the only thing a subject of ideological disorientation and dehumanization is expected to do.  In order to live an ideological life, he must let go of his interior life.  This is the most complex part of human existence because it involves an individual’s memories, pain, suffering, joy, as well as connection to his family and friends – an awe and wonderment of being.  But as Hannah Arendt observes in The Origins of Totalitarianism, “Ideologies are never interested in the miracle of being.  They are historical, concerned with becoming and perishing, with the rise and fall of cultures, even if they try to explain history by some ‘law of nature’” (469).  Therefore, by choosing the false existence of ideology, an individual has not only dehumanized his familial connections (which include religion and culture) but also his very self.

To dehumanize an individual is to remove his constant individuation or the unfolding of the human spirit in flourishment.  The only thing that continues is deception which repeatedly dismantles reality.  It exists outside of “all experience,”  and “insists on a ‘truer’ reality concealed behind all perceptible things, dominating them from this place of concealment and requiring a sixth sense that enables us to become aware of it” (Arendt, The Origins of Totalitarianism, 470-471).  Ideology, then, is a possessor of some kind of secret knowledge that will free an individual from the shackles of his old existence and ties to a particular culture and/or religion.

This secret is the promise of a better world, (the third attribute of ideology) in which ideology provides inoculation against everything that ails the society, is perhaps the worst deception of them all.  The first issue with this is that ideologues determine what those ailments are, which is often times religion or anything that requires freedom of the mind and heart.

This promise is hardly ever grounded in facts and even if there was a tinge of idealism in the inception of the promise, it’s quickly gone because an ideologue makes himself into a god, a being that knows no human finitude, and as a result lacks prudence and any other virtue in his actions.  He is compelled to constantly act without a moment of contemplation of his actions because ideology as expressed in a totalitarian government proclaims that “all men have become One Man, where all action aims at the acceleration of the movement of nature or history…” (Arendt, The Origins of Totalitarianism, 467).  But this movement is a sad and nihilistic time loop that builds one unnecessary and hollow revolution upon another.  The promise always involves work in which an individual is not allowed to express his own unique voice but rather to be drowned out by the noise of indoctrination and joyless repetitions until he is reduced to the sameness of every other subject that was deceived.

Once the reduction and dismantling of individual ontology is complete, ideology then becomes totalitarianism – a lived reality that started as a lie and always ends in the annihilation of human life.  The only path out of it is to recognize the inherent human dignity and to enter into a face to face encounter with the other human being.  In this relation, not only are we going to humanize others but also ourselves.

Emina Melonic is a Ph.D. student in Comparative Literature at University at Buffalo. She holds a B.A. in English, German, and Art History from Canisius College; an M.A. in the Humanities from the University of Chicago; an M.A. in Philosophy from the University at Buffalo; and an M.A. in Theology from Christ the King Seminary. Her work has been published in National Review, The Imaginative Conservative, The New Criterion, American Greatness, and Splice Today, among others.

A Canadian View of the U.S. Election

Technology as the Oracle of Today