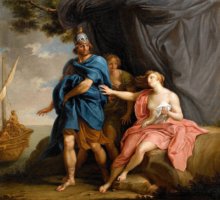 In Virgil’s Aeneid, the strongest and most admirable characters like Aeneas and Turnus are seen as ideals of patriotism and courage. At times though, their stories are momentarily superseded by interactions with a minor character. These subplots often serve to deepen our understanding of the main characters, but in turn bring a new character into the spotlight. Could a minor character then be crucial to the plot of an epic, or should the same minor character simply exist inconspicuously as one of dozens along a hero’s journey?

Dido is portrayed as a respite for Aeneas in the first book, even though she is one of many minor characters in the poem’s scope. At first, her Carthage home and hospitality literally serve as a resting place, a reprieve, for Aeneas and his men on their journey. Before she even meets Aeneas, Dido welcomes his men, Ease your hearts, Trojans, put away your fears . . . I’ll send you off secure and well-supplied (1.562, 571).

Through Venus, Aeneas learns that he has reached these Tyrian shores by the gods’ favor and Venus’s intervention (1.387-389). True, it is possible that Aeneas could have landed in safety anywhere on his journey, but we know Juno had designs for Carthage. Once Aeneas is revealed in his half-divine state, Dido continues by empathizing with the men in their fate and suffering and offers them compassion (1.628-630). The question is whether the gods could have directed the Trojans to any ally. Did it have to be Dido and her people?

Dido’s role quickly changes once she is manipulated and smitten by Venus and Cupid who have trap[ed] the queen in fire (1.673-4). She is no longer the lonely, widowed queen because Aeneas began to ease Sychaeus out of her mind and introduced her to a living love (1.720-1). Once again, were Dido and Carthage necessary to Aeneas’s development as a character? Aeneas could have fallen in love with anyone on his journey, or his mother Venus could have influenced him to love another at any point. But that in itself is another variable. The gods were at work and were wholly intertwined with man and city. Since Carthage belonged to Juno, however, Venus was determined to wrest control from her with this love intervention. Thus, Aeneas had to be part of the Tyrian queen’s life as dictated by the gods, regardless of their impetuous motives.

The gods continue to meddle in Aeneas’s future while Dido’s growing dependence upon Aeneas holds him in Carthage momentarily. Dido burned and raved all through the city (4.68) and led Aeneas on a tour of her city and its wealth. She soon ignores her duties as queen as building ceases and obligations pause, all for the sake of Aeneas (4.85-91). Soon enough, as Juno and Venus observe all that passes, their conversation reveals that they are controlling what happens to the fated couple. In rare agreement and with purposeful manipulation, they decide to bring the couple together in full consummation before seeking Jove’s approval (4.99-116). Once Jove learns of Juno and Venus’s guile, he sends Mercury to reprove Aeneas for forgetting your own kingdom that awaits you (4.267). The fact that the gods are temporarily obsessed with these mortal lives corroborates the truth that Dido and Carthage are necessary to Aeneas’s development.

Without Dido, Aeneas would not have seen the greater forces, even the greater good, that control him. If fate would have let me live the life I chose, if I had power over my decisions, I would have stayed at Troy (4.340). In other words, if Aeneas had had control over his fate, they would never have met. Here, he is discernibly stating that the gods compel him. Though he is struggling to force his feelings from his heart (4.332), he obeyed the gods and returned to his ships (4.395). Spurned, Dido finally realizes that Jove required Aeneas to leave her (4.614). In book six, once Aeneas is searching through Hades for his father, Aeneas is confronted by Dido’s spirit. He reiterates, It was against my will I left your country, and by the orders of the gods (6.460-1). Aeneas’s relationship with Dido, though a distraction for him, clarifies his destiny and that of Rome.

As a symbol of Carthage, Dido and her involvement then with Aeneas no longer appear as happenstance. On an even greater scale, Virgil felt impelled to establish a point of contention with Carthage, Juno’s favorite (1.15), as a future source of literal conflict in the Punic Wars. Carthage was rich, and experienced, and fierce in war, and Juno was determined that the city would rule the world (1.14-18).

Even this fleeting unresolved love affair left enough of a scar through mortal and divine hands that Aeneas, and all he represented for future Rome, appears destined. He had been harassed and racked by war until he set his city and his gods in Latium (1.4-6), but it still would cost so much to found the Roman nation (1.33). Jove confirms that Aeneas’s actions are but a catalyst to beget an empire that roars with war, to give us noble Teucer’s descendants, who will bring the whole world laws (4.228-31).

This was originally published with the same title in The Imaginative Conservative on January 23, 2018.

“Hamlet with a Happy Ending: The Lion King(s), Neoliberalism, and Simba’s Three Kingdoms”

Ex Machina: A Story of Chaste Love Murdered by the Ending

The Poland of Asia: Korea and the March 1st Movement