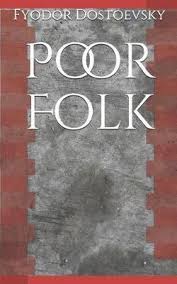 “Poor people are subject to fancies—this is a provision of nature. I myself have had reason to know this. The poor man is exacting. He cannot see God’s world as it is, but eyes each passer-by askance, and looks around him uneasily in order that he may listen to every word that is being uttered. May not people be talking of him? How is it that he is so unsightly? What is he feeling at all? What sort of figure is he cutting on the one side or on the other? It is matter of common knowledge, my Varvara, that the poor man ranks lower than a rag, and will never earn the respect of any one. Yes, write about him as you like—let scribblers say what they choose about him—he will ever remain as he was. And why is this? It is because, from his very nature, the poor man has to wear his feelings on his sleeve, so that nothing about him is sacred, and as for his self-respect—!”

I recently read Dostoevsky’s first full-length work, Poor Folk. When it was first published in 1846, it was heralded as a minor masterpiece of realist fiction, and I can certainly see why that is the case. Dostoevsky gradually reveals, in an epistolary format, the lives of two working-class residents of Saint Petersburg, two second cousins Makar Alekseevich Devushkin and Varvara Alekseevna Dobroselova. Devushkin is a government copy clerk of middle age, who lives in a wretched subdivision which he shares with some half-dozen other tenants and their families; he makes meagre wages, is constantly fretting over the threadbare state of his wardrobe, and is constantly in debt. However, he dotes upon his younger cousin Varvara, a seamstress who lives with her housekeeper in a similarly wretched situation just across the street, and writes to her often – often giving her expensive presents which he can’t afford.

This novel is really quite cleverly put together, dropping us in the middle of their correspondence and giving us these elliptical hints as to their life situations at each turn. Even at this early stage in Dostoevsky’s writing, the dark confinement of Saint Petersburg makes itself felt as an unspoken ‘third character’ in the background. The constraints and frustrations of both of the protagonists make themselves felt, at their most powerful, with a tremendous blunt force. The novel is naturalistic, but it is a naturalism markedly different in character and intent than Aksakov’s pastoral accounts of his family past. Dostoevsky hasn’t quite yet reached that point in his career where everything is ponderously meaningful, and yet even the piffle – that is the right word – the two epistolary narrators exchange with each other has the benefit of revealing to us the hard constraints they are both under. There are certainly elements of Poor Folk that remind one of Dickens, but those reminders are subtle.

One of the most moving parts of the early book is when Varvara discloses to Makar a diary that she wrote when she was younger, detailing her family’s move from the countryside into Saint Petersburg, her family’s debt woes, her father’s early death, her ‘adoption’ by her aunt Anna and her subsequent ill-fated romance with her tutor Pokrovsky. Her account of Pokrovsky’s relationship with his father – a twice-married, abused and shy man who seeks refuge in drink, but who sobers up thanks to his son’s ‘tough love’ – and her subsequent description of Pokrovsky’s illness and death, are told in a straight and matter-of-fact way, without much embellishment… and yet the emotional impact of the entire episode is remarkable. Dostoevsky may be speaking through his narrators, but they themselves only reveal to us what they choose to reveal to each other, and that clearly isn’t everything – as we can see by the end of the book. And in this way Dostoevsky skirts the ragged edge of sentimental melodrama without quite going all in.

Dostoevsky actually spares quite a bit of space for the mundane, trivial and œconomic details of his protagonists’ lives, how the want of a good cloak or a good pair of shoes can ruin their chances. This is particularly the case in Devushkin’s case, as his job as a despised copy clerk is at one point put in jeopardy on account of one of the buttons falling off his hand-me-down jacket, which happens in front of the government official he works for, when he is called on to account for a missing line in an urgent document he was supposed to copy. The reader is led to this point with a sense of utter dread for what will happen to Devushkin. But thankfully, ‘His Excellency’ takes pity on Devushkin and gives him another chance, as well as giving him an advance on his pay to spruce up his wardrobe.

What is interesting, too, is that Dostoevsky’s dual attitude toward Asia is somewhat on display, even here in his earliest novel that, on its face, has nothing to do with Asia! For Aksakov Asia – and in particular that part of the Urals where he grew up – is something of a pastoral idyll; for Dostoevsky Asia is both a ‘mythical’ source and a ‘tragic’ return. On the one hand, Varvara grew up there, and yet she does not talk about it except to say that she preferred it to Saint Petersburg (and little wonder!). It is the source of her happy memories, but these memories are not alluded to in her letters to Devushkin. On the other hand, though, it is also the place, alluded to as the ‘steppes’, where Bykov – Varvara’s elderly, lascivious and unfeeling suitor – promises to take her when they are married, and it is also where Varvara disappears to at the end of the novel, with Devushkin mourning over her as she departs to the steppes with Bykov. Though Dostoevsky’s attitude toward Russia’s eastward Asian frontier, its Tea Road alignment, would evolve later in his career, as we can see from his Writer’s Diary, the seeds of it are present in Poor Folk as the source of both Russia’s past and its unforeseen future.

Dostoevsky’s characters are given to certain psychological tics: Devushkin in particular has a style which is prolix and in some cases repetitive, and this style more than anything else reveals to the reader his nervous state and his overly-scrupulous, conscientious personality – which is particularly strained by the circumstances under which he is forced to live. And Varvara, as we can see through her letters, is deeply sensitive and able to cram a lot of meaning into a few elliptical phrases, but also has a certain hidden guilt or trauma, which we only begin to explore with her account of Pokrovsky. Here we can see some of the stylistic influences of Gogol on Dostoevsky, the psychological flourishes which he uses to give his characters expression. But unlike Gogol (most of the time), Dostoevsky approaches, and speaks through, these two interlocutors with a deep and humane sense of sympathy. He writes, not to judge these two or to hold them up as exemplars or object lessons of any kind. His interest in them is not, prima facie, political – despite Herzen (with some justification) calling this a ‘major socialist work’ in Russian literature. Dostoevsky writes about them, instead, to understand and to love them.

Genuine sympathy seems to be the primary factor which separates Poor Folk from the common run of sentimental melodrama – and what elevates it above some of the other contemporary works of social realism such as those of Hugo or even Dickens. Dostoevsky would later follow up Poor Folk by delving into the tormented psychology of his narrator in Notes from the Underground: a novel which had a much less likeable protagonist but which still somehow manages a kind of sympathy for him. Herzen and Belinsky did correctly intuit that it broadened the scope of the literary world in profound ways, some of which were even political. Dostoevsky’s politics themselves took a rather different turn than Herzen’s, though certain commonalities continued to exist until the end of his life. Even so, Poor Folk is still a landmark in Russian literature standing at the transition between one generation of authors and the next; it deserves to be read for this reason, and also on its own merits as work of social realist fiction.