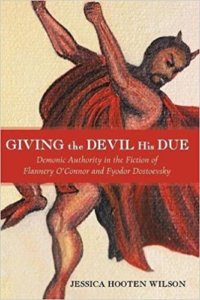 Giving the Devil His Due: Demonic Authority in the Fiction of Flannery O’Connor and Fyodor Dostoevsky. Jessica Hooten Wilson. Eugene, Oregon: Cascade Books, 2017.

Giving the Devil His Due is a book that grew out of Professor Wilson’s dissertation written under the guidance of the O’Connor scholar, Ralph Wood, at Baylor University.

It is clearly a wonderful idea to put O’Connor and Dostoevsky into conversation and Professor Wilson has invested a tremendous amount of work into mastering the work of Flannery O’Connor, especially, and Dostoevsky’s Brothers Karamazov, specifically. Moreover, she has clearly mastered much of the secondary work on O’Connor and Dostoevsky. In order to explore her primary concern—“Giving the Devil His Due”—Professor Wilson proposes to focus on the modern autonomous man who rejects authority—especially divine authority—in order to assert his own individual authority.[1] Focusing on the autonomous man, she relies upon René Girard’s “discoveries as they pertain to literature, mostly to those found in Dostoevsky that may be extracted and applied to O’Connor. . . . [I]n summary, Girard asserts that all human beings imitate the desires of others, whether or not they acknowledge the imitation.” (3) Furthermore, Wilson points out that for Girard this imitation of the desires of others is undergirded by “theological assumptions based on Judeo-Christian Scriptures.” (3)

Girard, Wilson points out, argues that two models exist to human beings for imitation—that of Christ or Satan. This same choice, Wilson argues, “underlies all of O’Connor’s and Dostoevsky’s respective works.” (3) We encounter in this sentence an instance of a problem that appears often in Wilson’s book. When she asserts that this choice underlies “all of O’Connor’s and Dostoevsky’s respective works,” she displays a certainty that suffuses many of her interpretive assertions. I think that while the either/or choice that she recognizes in all of O’Connor’s and Dostoevsky’s work, may be an accurate portrayal of the characters, the choice is not so simply made by the characters in the stories of these authors.  Elsewhere, Wilson writes: “Fyodor Dostoevsky and Flannery O’Connor are more than gargoyles posing on a cathedral scaring away devils; they also, with portraits of Christlike love, direct readers’ eyes upwards like the spirals of the Sagrada Familia. As mimetic artists, they believe in the potential for stories to transform readers.” (118)

I am not convinced that either O’Connor or Dostoevsky understood themselves to be mimetic artists, although the assertion is more applicable to O’Connor than Dostoevsky. In fact, Wilson points out that Dostoevsky was surprised and “profoundly moved when ‘a host of people, youths, graybeards and ladies’ accosted him after his Pushkin speech and exclaimed, ‘You’re our prophet. We’ve become better people since we read The Karamazovs.’” For me this passage does not support the idea that Dostoevsky knew he was writing a mimetic novel or a novel that explored the experiences of characters available for readers to imitate. It may even mean that the responses indicated that the people recognized the faith of the Russian people. Alternatively, The Brothers Karamazov may be taken as Dostoevsky’s literary record of “the furnace of doubt” from which his Hosanna emerged. In other words, if one asks: What does it mean to be a Karamazov?, we may conclude that the father and the four brothers represent a composite human being and hence a composite author, Fyodor Dostoevsky, and his experience.

In the final chapter, we find another example of Wilson’s proclivity to overstate her case. She writes that as artists O’Connor and Dostoevsky wanted the “reader then to imitate the good in their works. They desire their readers to model Alyosha and Mrs. Greenleaf more than Ivan and Rayber.” (132-133)  I have no real criticism of the substance of Professor Wilson’s book. I am sympathetic with her exploration of the literary symbolizations of O’Connor and Dostoevsky of the struggles of human beings who seek meaning in their lives that transcends the suffering and disorder of our times. While being sympathetic, however, I think that it is a bit naïve to think that readers will easily decide between the Divine and Satan through imitation of Mrs. Greenleaf or Alyosha.

Earlier in her book, relying upon Girard, Wilson argues that imitation requires that individuals choose Christ or Satan. I have a real problem with the issue of choice when applied to the stories of O’Connor and Dostoevsky, for the characters, in order to “choose” between their imitation of autonomous man (and hence Satan) and Christ (life and authority of) must undergo a “furnace of doubt.” O’Connor, in fact, writes in “The Fiction Writer and His Country”:

“St. Cyril of Jerusalem, in instructing catechumens, wrote: ‘The dragon sits by the side of the road, watching those who pass.  Beware lest he devour you.  We go to the Father of Souls, but it is necessary to pass by the dragon.’  No matter what form the dragon may take, it is of this mysterious passage past him, or into his jaws, that stories of any depth will always be concerned to tell, and this being the case, it requires considerable courage at any time, in any country, not to turn away from the storyteller.“[2]

In recommending that the reader of O’Connor and Dostoevsky choose between individual autonomy (Satan) and divine authority (submission to), I think that Professor Wilson should have explored more completely the nature of “choice.” As she points out “the choice requires a lifelong commitment to one of two radically alternative ways of living: denounce God because suffering exists in this world and thus perpetuate human violence or embrace the reality of suffering and discover a life of love and freedom.” (118) In other words, the “Choice” must be an existential choice, and this existential choice can only occur if the story itself evokes from the reader an imaginative participation in the agon, the struggle, that we see Tarwater and Alyosha undergoing.

How may this be possible? The reader must take the story seriously, must read the story imaginatively, and must thereby participate in the drama of the story itself. Moreover, the reader must be open to the spiritual struggle that the stories depict. But if, however, the reader is closed to the dimensions of the spiritual quest or response to the divine, if the reader has already closed herself to the divine and opted for autonomy, the hope for choosing Mrs. Greenleaf or Alyosha to imitate can only occur if grace is bestowed upon them as a result of their own struggle for peace or happiness. The reader must not only pass by St. Cyril’s dragon, but recognize and admit to himself that he is passing by the dragon. Imitation then, I think, is only tangentially related to the story, for the story itself must imitate or symbolize the whole of reality (“God, man, world and society”) that gave rise to the stories in the souls of the authors. Indeed, the fiction of Dostoevsky, as I point out above, emerges from his “furnace of doubt.” I contend that the temptation of autonomy could be more effectively addressed—in Dostoevsky, especially—if a reader asked: what does it mean to be a Karamazov?

In closing, I would be remiss if I did not call attention to several problems of mechanics or form. I think that Professor Wilson’s book would be much stronger if it had received a vigorous copy-editing. I found mistakes in documentation and in the accuracy of quotations in the text. Moreover, while the book has an index, I do not think that the index is especially useful for the reader. For example, the entries are much too general to be of any help to the reader. There are more than 100 entries for Dostoevsky, O’Connor, Christ and several others without any specification to what “topic” entry refers. Sometimes, even, the entries record a sequence of pages 7-19 or 97-107 under “Dostoevsky,” for example. Some of the page numbers that are listed in index entries do not refer to passages in the text itself, but instead occur in bibliography.[3] Passages to the Judeo-Christian Scriptures are not included in the Index at all. Finally, I think that a vigorous copy-editing could have advised the author to eliminate from the text material that leads the reader out of the primary focus of the argument. Here, for example, the book would have been stronger had Professor Wilson limited herself to focusing on the novels of O’Connor (without introducing so many characters and plots from O’Connor’s short stories) as she had focused on The Brothers Karamazov.

Despite my criticisms, criticisms that I think are relatively minor, I would argue that this is a book well worth reading for it challenges readers to once again engage in conversation the spiritual dimensions of O’Connor’s and Dostoevsky’s literary creations.

[1] Since it is impossible adequately to communicate the content of Professor Wilson’s argument I reproduce here the Table of Contents with chapter subdivisions to indicate the elements of her argument.

Protest on Behalf of the Suffering Innocent

“Love in Dreams” and Theoretical Tenderness

“Who are You?”: Human Pride v. Omnipotent God

Correcting Christ’s Work: From the Grand Inquisitor to the Displaced Person

Chapter 2: The Death of God and Kingdom of Violence

From Parricide to Suicide, Homicide, and Deicide in Wise Blood

“The Church Without Christ” as “Caricatural Ultra-Christianity”

Chapter 3: The Demonic Authority of the Autonomous Self

Demonic Presence in The Brothers Karamazov

Ivan and the Devil

The Demonic in O’Connor’s Work

Conclusion: Imitating the Son and the Kingdom of Love

Imitating Christ Through the Love of Suffering Children

Charles Embry is Professor Emeritus at Texas A&M University at Commerce. He is author of several books, including The Philosopher and the Storyteller (Missouri, 2008); Voegelinian Readings of Modern Literature (Press, 2011); and, with Glenn Hughes, co-editor of The Eric Voegelin Reader: Politics, History, Consciousness (Missouri, 2017).