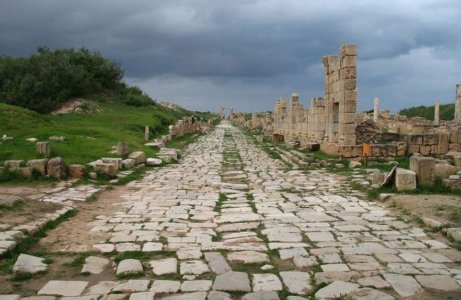 Thomas Hardy’s mother died in 1904 at the age of ninety. One of the poems Hardy wrote, musing on her memory, is called “The Roman Road.” In this poem, the meaning of the history of Rome is juxtaposed with the memory of the presence of his mother to him in his early youth. We too are invited to feel her presence, as we walk along a Roman road through the English countryside:

The Roman Road runs straight and bare
As the pale parting-line in hair
Across the heath. And thoughtful men
Contrast its days of Now and Then,
And delve, and measure, and compare;
Visioning on the vacant air
Helmed legionaries, who proudly rear
The Eagle, as they pace again
The Roman Road.
But no tall brass-helmed legionnaire
Haunts it for me. Uprises there
A mother’s form upon my ken,
Guiding my infant steps, as when
We walked that ancient thoroughfare,
The Roman Road.

What I find extraordinary in this poem is its expression of historical consciousness. The transition between childhood and adulthood is marked by the attainment of this consciousness. Specifically, it is the knowledge of the history of Rome. Knowledge of the history of Rome, it is suggested here, is what demarcates the general boundary between childhood and adulthood.

The poem expresses a childhood memory of the countryside. Through this countryside, an ancient Roman road cuts through the landscape. In the first stanza, we have the childlike imagination looking at this road. In the mind of the child, the road is compared to something that the child knows: the parting of hair, and the line that cuts through that combed partition.

It is quite wonderful that we can poetically experience this fresh way of looking at things, from the standpoint of a child. We are invited to re-experience this direct mode of perception, where our store of knowledge is quite limited, but, nevertheless, we are still able to make comparisons between the quite limited number of things that we know. Drawing from personal experience, we make naïve connections, which are charming in their simplicity of vision. For example, the landscape that looks to us like the parted hair on a head.

The vision of these “thoughtful men” does not nullify what began in childhood perception, but rather extends it. The word “And” is placed at the beginning of this second sentence, suggesting that the adult way of perception is, after all, an outgrowth and extension of the childlike point of view that can make initial comparisons and connections between grass and hair, between roads and parting lines.

What marks the consciousness of adulthood, however, is the explicit awareness of the theme of “Now and Then.” With this comes the more rigorous sifting that marks consideration of past and present. The thoughtful adults will “delve, and measure, and compare.”

And so the first stanza ends with a lovely parallel being suggested. As we compare “Now and Then,” later in life, as a personal comparison of adulthood and childhood, so too are we capable in that same adult time of life of making a “Now and Then” comparison between today and yesterday on a historical scale. The vision of the Roman road thus also invokes a comparison of the world of today with the age of the Roman Empire.

Notice how a semi-colon ends the first stanza, which means that the “thoughtful men” remain the grammatical subject of the actions recounted in the second stanza. In other words, it is not the imagination of the child that proceeds to call into its “Visioning on the vacant air” a host of marching Roman soldiers. No, the child’s mind does not yet know anything about Rome or about its history. The child can only think of direct comparisons, in the presence of the Now, between heads of hair and roads through fields.

It is the adult mind, rather, with its familiarity with Now and Then, and with the constant ruminations of delving and measuring and comparing between times past and present, that the personal becomes extended into considerations on a historical time scale. It is the adult mind, aware of history, and not the child’s mind, that presents to us in this stanza an act of the imagination that envisions the ghostly soldier figures marching along the Roman road.

And just as the Roman road becomes, for the adult mind, a sign of all the Roman things that it can call up into the imagination, so too does the military standard of the Eagle, carried by the soldiers, act as the explicit sign of Rome for those soldiers. This semiotic doubling, then, seals the suggestion I am making as more than a suggestion. Adult historical consciousness is able to achieve a greater range of imagination because its ability to conceive of the signifying differences between Now and Then is so much the greater, thanks to the stock of comparisons built up through lived experience and historical education.

The first sentence of the third stanza makes it clear that the child is not yet able to make those adult acts of imagination that recreate the history of Rome in the mind. The mind of the child is still so young that “no tall brass-helmed legionnaire” is able yet to haunt “The Roman Road” for the child’s mind. All that the child knows is his mother, whose form and figure dominates his vision as she guides him through the landscape and down that road.

This “mother’s form upon my ken” tells us precisely what it is that limits and guides any child’s perception. “Ken,” of course, is the precise word that names the range of vision, the range of knowledge. In the earliest years, the years of “infant steps,” this range of incipient reason is determined overwhelmingly by the mother’s gentle guidance.

What is truly lovely about the conclusion of the poem is its likening of Hardy’s memory, of his mother’s presence guiding him down that Roman road, with the looming presence of Rome, soon to be readily invoked in imagination in the years of adulthood once the history of Rome is to be learned. In other words, the lovely suggestion is that Rome is as much a mother to us all as is the birth mother who leads us down the roads of our first childhood experiences.

These first roads are pathways into vast realms of experience that we cannot yet, but soon will be able to, imagine. They are eminently comparable to things already in our experience, no matter the limits of its childlike range. But they are also eminently comparable to the vast range of all of human experience, if only we acquire the adult ability and experience and imagination to see them, like the Roman road, as signs and markers bridging between Now and Then.

The Roman road of Hardy’s childhood experience, and our experience of this poem, can become not simply a memory of a guiding mother, or even simply the memory of the history of Rome. It can become no less than a sign of all signs extending into history. For it seems to me that The Roman Road is nothing less than the royal road of all adult historical consciousness.

That road is the way of the imaginative conservative, who does not throw away the all-connecting vision of childhood, and then replace it with another, “more sophisticated” way of thinking. The way of the imaginative conservative, rather, embraces and pays tribute to the maternal mediation of every mother near to us who has acted in loco parentis of our more ancient mother, Rome. For it is just this sort of filial piety that prepares us to grow our adult imaginations in the right way.

And what would that be? Nothing less, I would say, than a perfect harmony with all the most treasured gifts of our happiest childhood memories of stepping forth onto the Road.

This was originally published in The Imaginative Conservative on May 21, 2017.