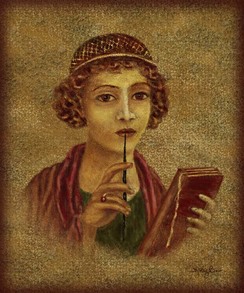 The Roman poet Catullus translated a masterful love poem by the Greek poet Sappho, adapting it from her Greek (Sappho 31) into his Latin (Catullus 51). While his poem does make an effort to follow her metrical pattern, his translation is nonetheless even more interesting because it is neither simply literal nor straightforwardly accurate. It is, rather, a brilliant reinterpretation and a daring adaptation.

Due to Catullus’ own insertions and interpolations, we have a type of “translation” of which I am especially fond—namely, a “free translation”—in which a poet adheres more to the implicit liberty of spirit in the original text than to its express letter.[1] In the appropriation of one poet’s work by another poet, we see the old content remade in the form of the new. The new poet follows the form of the old, not with strict literalness, but rather according to a spiritual interpretation and understanding of the previous poet’s deeper purpose.

Even when this results in a genuine change or innovation in substance, this is still something to be celebrated, because the result is the highest sort of complemetary dialogue across centuries. Perhaps the best analogy justifying such artistic liberty would be the sort of musical homage that takes place when one musician takes material from another musician and reworks it into something new. While showcasing something new, the new music nonetheless always invokes memory of the old as an integral part of the experience of the new artwork. The very best poetry is truly musical in much the same way.

Of course, just as with the many examples of musical quotations, adaptations, and reinterpretations that one may encounter, one is always free to disagree with one poet’s “adaptation” and “free translation” of the material of another poet. But to disagree convincingly, one would have to propose a new translation oneself. Further, one’s own hermeneutical presuppositions could only be fully justified by the merit of the artistic achievement of one’s own rival translation.

In short, there is no way around the task of interpretation, because an ideology of slavish adherence to the letter can never adequately communicate the liberty of spirit found in the original text. The soul of the poet is free when it soars in its most contemplative modes. The best that a reader or translator can do is to try to follow the soul of the poet along that same flight path.

E.T. Merrill, in his 1893 edition of the Latin text of Catullus 51, notes how Catullus is making “a free translation of the ode of Sappho.” The freedom is most manifest in the final stanza: “It will be noticed that for the fourth stanza of Sappho Catullus substitutes one entirely his own, and that elsewhere he adds, omits, and modifies details at his pleasure.”[2] In 1894, Leonard C. Smithers offered the following translation of Catullus 51, which I have reordered below, for my own pleasure, with line breaks similar to those of the four Latin stanzas of Catullus:[3]

He seems to me to be equal to a god,
he, if such were lawful, to surpass the gods,
who sitting across from you again and again
gazes on you, and listens to you

sweetly laughing, which snatches away
from sombre me my every sense:
for the instant I glance on you, Lesbia,
nothing is left to me [of voice],

but my tongue is numbed, a keen-edged
flame spreads through my limbs, with sound self-caused
my twin ears sing, and my eyes are
enwrapped with night.

Leisure, Catullus, to you is hurtful:
in leisure beyond measure do you exult and
pass your life. Leisure first ruined
rulers and prosperous cities.

In the first stanza, where Sappho witnesses her beloved and her beloved’s interlocutor, she likens the interlocutor to a god.[4] But Catullus amplifies the thought, saying in his first stanza that the interlocutor in fact surpasses the gods. Such is the nature, it is suggested, of the experience of being in the presence of the beloved, for whom Catullus inserts the name of “Lesbia.” This transcendent and ecstatic experience of being in love, with its loss of calm self-possession, is well described in Sappho 31. As adapted by Catullus, with his own emphases, however, the exalted nature of this loss of self-possession is asserted as being something more than our usual notion of the divine.

To my mind, Catullus is not adopting the usual interpretation of Sappho’s poem, according to which Sappho is taken to be jealous of the self-possession of the interlocutor who is discoursing with the beloved. Instead, I take Catullus to be transposing himself into the actual position of the interlocutor, so that the bodily confusion into which he is being thrown is being described in the poem precisely as the resultant effect of being in the close presence of the beloved. This loss of self-possession is thereby being asserted as something more surpassingly divine than a merely divine mode of exceedingly calm self-possession. The loss of self-composure in love, therefore, is more divine than an unchanging divine eternity of self-possession.

Catullus appears to move into self-loathing over his loss of self-possession in the final stanza. This could be taken as an echo of Sappho’s alleged jealousy over the interlocutor’s ability to remain self-possessed in the presence of the beloved. On this interpretation, which assumes the poem is primarily about “jealousy,” Sappho then, unable to keep calm, fears that she appears ridiculous to her beloved, compared to her rival who is the beloved’s current interlocutor.

While Catullus’ final stanza could be read this way, if we take his second stanza as having decisively transposed himself into the position of the first stanza’s interlocutor, there is no need to constrain the poem with a univocal expression of “jealousy” over a “third party” as its only hermeneutical possibility. To my mind, Catullus’ final stanza ambiguously invites the interpretation that he is ironically celebrating the times of leisure in which he is able to be “ruined” by idly indulging in time spent with Lesbia, in whose presence his calm self-possession is ecstatically “undone” whenever he attempts to be her interlocutor. Rather than celebrate, as an ideal, the sort of self-possessed otium cum dignitate (“dignified leisure”) that a Cicero would, we could say Catullus prefers his undignified leisure with Lesbia instead.

In this undignified leisure, he is not destroyed by any rival. That would be the scenario where, by comparison, because he lacks his rival’s marvelous, godlike self-composure, he is ranked lower in the eyes of his beloved. Instead, on my interpretation, any rival for Lesbia’s affections can simply drop out of Catullus’ consideration. He celebrates not divine self-possession, but instead the divine madness of love that utterly ruins any sort of calm composure. As Catullus seems to suggest (with his modification of the opening lines of Sappho’s poem), even though self-possession is a divine attribute, the ecstasy of love is an attribute that, in its self-emptying, is even more divine.

This was originally published in The Imaginative Conservative on January 14, 2017.