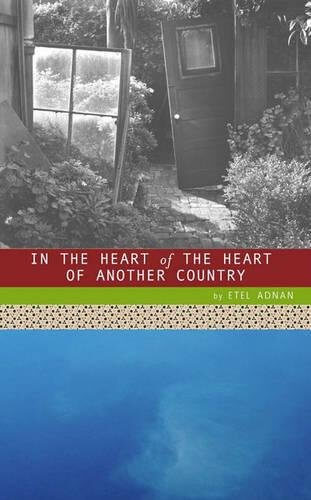 There is one single date in Etel Adnan’s 2005 slim volume of autobiographical writing, In the Heart of the Heart of Another Country, 2003, followed by the meaning-giving sentence, “To look at Iraqis brought to their knees” (113). It appears in the seventh and last text that completes this genre-crossing book that combines memoir, short story, prose poem, essay and diary. The seven texts written at various periods in the author’s life over three decades and collected in this City Lights Books publication are preceded by an explanatory introduction that recounts Adnan’s fated encounter with William Gass’ collection of short stories, In the Heart of the Heart of the Country. Another date appears in this introduction, 1971, and thus the volume is framed by two wars, the Lebanese civil one (which Adnan witnessed brewing one year later) and the American war in Iraq which the author, in fury and grief, followed in the press from the country of the perpetrator.

In her intertextual dialogue with Gass, Adnan acknowledges her serendipitous indebtedness to his collection, and in particular to its title story, which not only inspired her but also provided the idea for the structure in the five out of the seven chapters that make up the volume (the seventh being marked by a strong stylistic hiatus). Paragraphs of various lengths bearing the same titles (with some variations) such as Place, Weather, House, A Person, Another Person, Vital Data, Education, Business or Politics contribute to the fragmentariness of the narrative which is also non-linear as time and place are reiterated.

Adnan’s “another country” seems to be Lebanon but is also the US, France, Greece,  Syria, even the Arabian peninsula. This translingual and transcultural writer (and eminent painter) who recounted her linguistic adventure in another slim, autobiographical volume, Writing in a Foreign Language,  moves from country to country and from mountain to the sea depicting her nomadic existence in forceful vignettes that point to an intense intellectual and emotional life marked by restlessness.

Thus the paragraphs on House reveal her idea of shelter, “I reside in cafés: they are my real homes. In Beirut my favorite one has been destroyed. In Paris, Café de Flore is regularly invaded by tourists (…) Yes, there is one on a northern Green island where I go secretly. Neither the FBI nor the CIA can find that place” (22). This is a respite from the “feeling of void, or rootlessness, or uselessness that possessed” (40) her in big cities. There are kindred spirits, too, in her search of home such as Thoreau.

Likewise, her sense of place is fluid, shaped by a nomadic drive that clearly finds no repose, “Oceans are the kind of place I would inhabit” (44). In such a vast home there is room for everyone and everything. In the psychogeography of the narrative, places are prominent and heavy with personal and historical meaning. Thus she writes about Beirut when she returns to the on-the-verge-of a civil-war city after seventeen years of absence, “My absence has been an exile from an exile”  (1).

Adnan’s exile-imbued eyes are laced with the pathos of fleeting beauty, “A rose bush is growing beautifully in the largest one, capturing the morning rays of light. The roses affect my heartbeats with their fragrance” (86). However, the poetic tenor of the book does not sidetrack the reader from its politics but enriches his/her experience.

In fact, politics takes on a two-fold prominence in the book – in the paragraphs that specifically deal with this notion such as the following, “Once I dreamt of becoming the new Ibn Khaldoun of America or the de Tocqueville of the Arabs. So I don’t understand how it is that there are kings without kingdoms and Palestinians without a Palestine” (2); in the last chapter, “To Be in a Time of War,”  which is a loud protest against the war in Iraq. Written entirely in to-infinitive, without-verb sentences, it has a deceptively descriptive hue.

Both progressive and feminist politics inform the volume,  as a strong political consciousness intensifies the author’s unease which drives her prose, “We sang with Cheikh Imam, ‘Guevara died, Guevara died.’ Funeral lines were multiplying (30). Adnan’s lines are not numerous but the aphoristic density of her writing make the book a demanding read.

The conjunction of politics and poetry is also salient in “At Both Ends,” a piece about T. E. Lawrence whose figure seems to inflame Adnan’s empathetic imagination. In this text, Adnan, the story-teller tells the story of “the most famous western figure of the tragedy of betrayal” (xv), Adnan, the bard of the desert sings its mystery, Adnan, the poet and essayist expands on pain and love, Adnan, the militant exposes the politics of Western betrayal.

In spite of the fragmentation of its structure, the diversity of its theme and the lack of linearity,

In the Heart of the Heart of Another Country offers the reader the figure in the carpet – a sea-loving, cat-loving narrator delivers her peripatetic life in reflective flashes and impressionistic brushes. The caustic black humor, the associative logic, the oneiric touch, the pathos that permeates this long gaze at the “road that leads the world the slaughterhouse” (116) make this volume an endearing read.

The book has drawn considerable academic attention and its author can only be the delight of transculturality scholars, the poster child of “translingual imagination.”