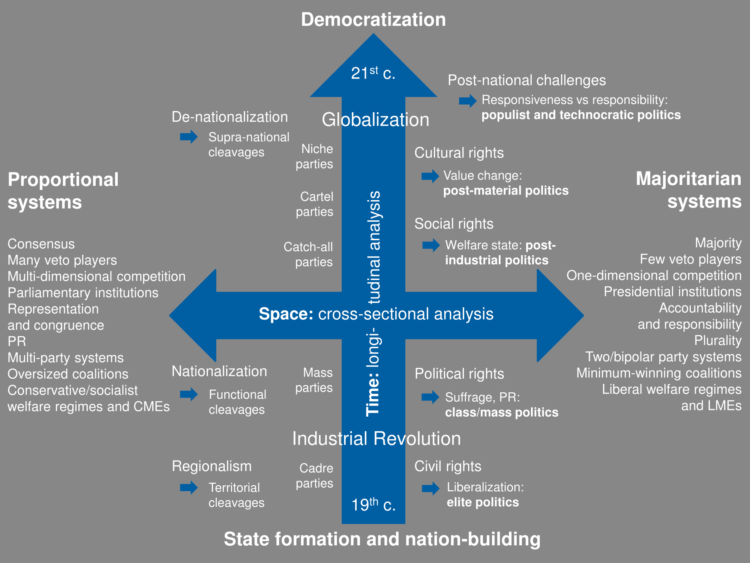 The fourth and final subfield I cover in my Introduction to Political Studies class is Comparative Politics.  This subfield is the most problematic and difficult for two basic reasons.

Second, Comparative Politics is largely dominated by positivist approaches to political science.  My coverage of the other subfields has attempted to portray a more synthetic political science that goes beyond the fact-value distinction, so finding readings in this subfield suitable for an introductory class can be a challenge.  Moreover, one of the marks of a “classic text” of a subfield, which I try to assign for each of the subfields, is readability.  The scholarship of most positivist political science is not suitable for an introductory class.  I considered using some materials from a textbook on comparative politics authored by one of my colleagues.  But I decided the textbook was more suitable for more advanced students, whom indeed is the target audience of the textbook.

Instead of trying to cover “everybody else” using a reductionist methodology, I instead decided to cover a single area of the world, using an approach that draws in the multiplicity of methodological approaches of political science.  For the last few weeks of class, I provide a basic overview of the politics of Islam.  I assign L. Carl Brown’s Religion and State: The Muslim Approach to Politics, which provides a useful overview covering political and religious history, ideology, and practice.  It is also comparative in the sense that the author uses examples drawn from Western political and religious history to illuminate things going on in the Islamic world.  In less capable hands, this can simply turn into an exercise of “Orientalism,” but Brown is a sufficiently competent scholar to remind students that comparing Islamist movements to Western millenarian movements, for example, only serves as a marker, not as a complete identification.

Following Brown, I cover premodern and modern Islamic political understandings and practices.  He cites a hadith of the Prophet Mohammed that illuminates premodern understandings of politics:  “Work for this world as if you would live forever.  Work for the world to come as if you would die tomorrow.”  Islamic attitudes toward politics are neither escapist and otherworldly, nor are they completely this-worldly.  To borrow a phrase of Eric Voegelin, Muslims, like the rest of us, live in the In-between (metaxy) of existence, between immortality and mortality, love and death, etc.  Unlike Westerners, however, Muslims see a greater ontological continuity in the In-between.  The objects of politics and religion belong to the same seamless reality.  While “mosque and state” refer to different realities, these same realities are not marked by the “great separation,” as Mark Lilla has called it, that one finds in modern politics (and which also derives from Augustinian distinction between city of God and earthly city).  As a result, one finds the distinction between “mosque and state” a matter of conducting pragmatic adjustments instead of sustaining a principled arrangement.

I point out the difficulty in identifying a “Muslim” approach to politics.  First, there are many Islams, as there are many sects and denominations in Christianity.  One must regard Islam as a tradition, where ideas and practices are in flux, with numerous different viewpoints within that tradition.  Second, what we identify as Islamic might actually have pre-Islamic roots.  For instance, does that Sharia law derive from pre-Islamic customs?  Does the supposed inability of Muslims to practice democracy have its roots in the geographical structures of the Middle East, which, being so arid, depended upon and propagated a despotic society that needed slaves to build the canals and till the soil (what Karl Wittfogel in the nineteenth century referred to as the “hydraulic society)?

Having dealt with these qualifications of studying our subject matter, we turn next to the content.

Premodern Islamic attitudes and practices were by and large based on low expectations on what politics can achieve.  Humanity is depraved, and tolerating a bad ruler or even tyrant is a matter of getting what one deserves or obtaining the best one can hope for.  Because of this low expectation, Muslims historically have been able to keep distance between their political authorities and their religious practices.  If one affirms the depravity of one’s ruler, then one will take guard to ensure he lacks authority to dictate religious doctrine or practice.  Brown observes the Ottoman empire, where the emperor had authority to appoint clerics, marks the greatest extent political authorities were able to influence religious practices.

I cover some Islamic political history, including the early generations.  I also explain the difference between Sunni and Shia, with side-glances to Sufis and other sects.  I point out that within each part of Islam one finds a wide range of attitudes and practices.  For example, within Sunnism, one finds a Puritan extremist like Muhammed ibn Abd al-Wahhab on the one hand, and a modernist like Shaykh Muhammad Abduh (1849-1905) on the other hand.

The resurgence of political Islam has roots dating back to European colonialism, and beyond that, the defeat of the Ottoman Empire at Vienna and the subsequent Treaty of Carlowitz (1683), which forced the Ottomans to adopt the customs of European diplomacy and international law, which, according to Bernard Lewis, constituted a blow to their pride and led to a gradual decline in power.

Political Islam is an expression of the struggle to modernize, which, as we have seen, is hindered by Islam’s seamless ontology that resists modernity’s impulse to separate various realms of human existence.  On a social level, as Olivier Roy observes, Muslims worldwide are responding to global forces that dispossess them, either by their migrating to the West, or from their rural village to the metropolis.  Either way, their social, cultural, and normative markers are getting overturned, which produces anxiety.  If Westerners can be criticized for asking what Islam is about (which assumes there is a single “Islam”), one similarly finds Muslims, deprived of their cultural and social markers, asking the same question.  This is why, for instance, a website called Askimam.org has proven more useful – to whom does one look when the local imam no longer possesses authority (or one lacks a local imam)?

Political Islam, which marks a more assertive form of politics than generally found in premodern forms of Islamic political practices, is also an attempt to structure politics on a “home-grown” basis.  Muslim societies in the twentieth-century tried socialism, nationalism, and Arabism, and found them wanting as well as too European in lineage.  Political Islam seems attractive because it calls for the revolutionary rearrangement of society along Quranic lines.  Of course, Ayotollah Khomeini learned Marxist-inspired Third Worldism (e.g., Frantz Fanon) during his exile in Paris, and Sayyid Qutb, likely the most influential Islamist ideologue, drew his critique of the materialist West from French fascists.

Of course, tracing lineage is not as important as understanding the nature of the ideology. I cover Qutb, al-Banna, and Maududi on the Sunni side, and point out the “radical democracy” dimensions of their thought.  The Shi’ite Revolution in Iran was led by the clerics.  I also discuss the Mahdism of the current president, Mahmoud Ahmadinejad.

If I had time, I would spend more time discussing Islamic reformers, including Iranian Abdolkarim Soroush, and novelists, including Orhan Pamuk, whose Snow, which is a wonderful meditation on the faultlines between secularism and political Islam in Turkey, won him the Nobel Prize.

Even so, I teach the politics of Islam with the assumption the students lack any knowledge about it.  I try to avoid the politically correct strategy of purging them of their “Orientalism.”  Genuine comparative knowledge strives to understand political phenomena in their entirety, at least in outline, warts and all.  I will have succeeded if they have gained an appreciation of the complexity of the politics of Islam.

I began my discussion of my introductory political science course by commenting on the link between political thinking and self-knowledge.  If I have accomplished anything in this course, I hope I have instilled in my students a little self-knowledge, warts and all.