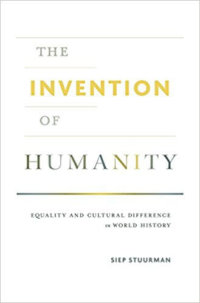 This book is a history of the idea of humanity across world history. Stuurman analyzes the idea of humanity into two other concepts, equality and cultural difference, and he offers discussions of wide range of thinkers, some well-known to a general academic audience, others less so: Homer and Hesiod, the authors of the Hebrew and Christian Bibles, Herodotus, Confucius, Stoicism, the Koran, the Chinese historian Sima Qian, Montaigne, the anti-imperialist Spanish priest Las Casas, Raynal and Diderot, Toussaint Louverture, Frederick Douglass, the 19th century American advocate of scientific racism, Samuel Morton, John Stuart Mill, the 19th century critic of British rule in India, Dadabhai Naoroji, Du Bois, Franz Boas, and Eleanor Roosevelt, as well as a host of others.

The book is organized chronologically, with chapters on the roots of the idea of humanity in antiquity (chapters 1 and 2); on the views of cultural difference in the great historians of antiquity and in medieval Islamic historians (chapters 3 and 4); on the confrontation between Europeans and the indigenous peoples of the New World in early modernity (chapter 5); on the complicated reactions of the thinkers of the 18th century Enlightenment to European imperialism (chapter 6); on the critiques of European or white imperialism offered by African-Americans, Hindus and Muslims in India, and others (chapters 7 and 8); and on the creation of the United Nations Universal Declaration of Human Rights after World War II and contemporary antiracism efforts (chapter 9). The book ends with an epilogue that looks forward and that includes a discussion of the debate between Francis Fukuyama and Samuel Huntington about the universal character of liberalism.

Stuurman writes his story from the point of view of humanity and equality as understood by mainstream academic liberalism. He quotes approvingly the view that the U.N. Universal Declaration of Human Rights is “the secular bible of our time” (2). The most important chapter for understanding Stuurman’s point of view is thus chapter 9, which narrates the negotiations that went into the writing of that document. Stuurman disavows any ambition to write a “Whig history” (23—25) for the good reasons that Whig histories were often wrapped up in racism and imperialism and that major events of the past two centuries (the connection between science and racism and the totalitarianisms of the 20th century) were negative for equality. He also recognizes that many religious traditions have complex things to say about equality. Yet these remarks do not change the facts that Stuurman basically thinks that the moral perspective of contemporary liberalism is the correct moral perspective, or at least superior to all known alternatives and that he reads the many texts that come before the Universal Declaration of Human Rights not so much for themselves but for how they contribute or detract from the development of the ideas of humanity and equality.

Stuurman is mainly interested in intellectual history rather than political, economic, or military. He writes that “ideas matter and canonized ideas matter a lot” (5). Yet as he makes clear, he is not interested in inquiring into a “metaphysical foundation” for the idea of humanity (577). In this he follows the authors of the Universal Declaration of Human Rights, who after much discussion deleted all references to God or nature from the declaration as a means of avoiding needless controversy amongst the signers: “All people who accepted the rights should be free to ground them in their own religious or philosophical worldview” (501; 577-78). From the point of view of securing a political consensus, this makes good sense. It is less satisfying from the point of view of someone trying to decide whether humanity in Stuurman’s sense is a compelling ideal or not. The problem shows up in Stuurman’s title: if humanity had to be invented, who is to say that it could not be disinvented or that at some future time we might not want to disinvent it?

Stuurman writes that common humanity is not an “empirical fact” but is rather an imagined possibility that could become true: “When a sufficient number of people believe that all people are fellow humans, or even equals, those beliefs become social facts on a par with other social facts, as much a part of society as political power, material wealth, and the force of arms” (1). He implies that moral and political ideals are like conjuring tricks: believe hard enough or with enough fellow believers, and they will come true. This is by no means to say that Stuurman’s ideals are false, only that we cannot tell, based on what he says here, whether there is a rational defense of those ideals or not. Because he intentionally avoids the issue of foundations, his ideals, as he presents them, have the status, not of truths, but of rhetoric or propaganda.

A strength of the book is that it covers so much that it would be almost impossible for any reader not to be introduced to some previously unencountered thinker or thinkers. Readers who know only the canon of political theory, for example, could profit from the discussion of the Chinese thinkers, the medieval Muslim thinkers, Las Casas and Acosta, Boas, Gandhi, Montagu, and others. Yet that strength is also a weakness. The book is so big that it is easy to lose the thread of the argument, and it has the feel of “everything but the kitchen sink.” Moreover, perhaps because he himself is not interested in the question of foundations, Stuurman is not sensitive to the thoughts of the figures he studies about that question. Yet if we are attentive to that issue, we will, I suspect, be inclined to ask to what extent or even whether all these figures are part of a single story. For example, granted that a thinker like Herodotus, by raising the issue of nature and convention, provides a ground to criticize ethnocentrism, does that mean he is best understood as a contributor to our current notion of humanity? Might we not learn more both about him and ourselves if we were to leave him in his otherness, as an alternative not to be simply assimilated or rejected but wrestled with?

Stuurman is to be commended for recognizing that there is a common human experience that allows us to speak intelligibly and converse reasonably across vast historical, cultural, and geographical barriers. One wishes, however, that he had tried to do more by doing less: either to offer readings of some of these thinkers for their own sake and in all their foreignness to us; or to explain just the thought (philosophical as well as political) of the architects of our contemporary notion of humanity. Yet either one of those tasks would probably have required that Stuurman take more seriously the questionable character of the contemporary ideal of humanity than he does.

Thomas W. Merrill is Associate Professor of Government and Associate Director of the Political Theory Institute in the School of Public Affairs at American University. He is the author of Hume and the Politics of Enlightenment (Cambridge, 2015) and is a co-editor of three volumes, including The Political Thought of the Civil War (Kansas, 2018).

Sojourns in the Western Twilight: Essays in Honor of Tom Darby

Timelessness of Proust: Reflections on In Search of Lost Time

Alasdair Macintyre, Charles Taylor, and the Demise of Naturalism