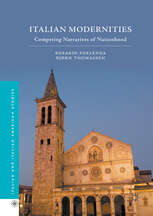 In his seminal article, “Multiple Modernities in an Age of Globalization,” Shmuel N. Eisenstadt claims that there is no single modernity, rather a series of different modern political projects. Each of these projects is influenced by often-confrontational interactions with alternative visions of renewal. Additionally, these projects are shaped by the past of the civilizations within which they gestate, specifically their “basic premises of cosmic and social order [and] “existing patterns of institutional formation.”[1]

These notions are explored in Rosario Forlenza and Bjørn Thomassen’s Italian Modernities. Forlenza, a researcher on cultural and symbolic politics, and Thomassen, an associate professor of social and political sciences, claim that “multiple modernities”[2] can arise and operate within national contexts. Modernities, for them, develop within a national society from a constant dialogue with its past, real and imagined, taking place predominantly in periods of political and existential crisis. Multiple interpretations of this past then give rise to a range of “alternative modernities”[3] locked into mutual competition.

Forlenza and Thomassen illustrate their points by using contemporary Italy as a case study. Italian notions of modernity, they contend, grow from engagements with the country’s national past. In other words, these ideas draw upon the Risorgimento (‘national resurgence’) as “a reservoir of symbols and strata of archeological layers”[4] they employ to understand “the present and how to move Italy forwards.”[5] These notions are informed by Italian nationhood – which they understand either as Italy’s historical experience of institutional unification, or as a political myth yet to be translated into reality. These various interpretations of the Risorgimento help to foster different – and often opposed – modern projects. Furthermore, the authors claim that the latter are mainly consolidated during transitional phases in the country’s political life, when the erosion of previously accepted interpretative frameworks prompts a collective search for new ways of understanding and affecting reality. Considering its numerous indigenous “quests”[6] for modernity, Forlenza and Thomassen argue, Italy should be approached by academics as an influential laboratory of political innovation.

The structure of the book is mainly chronological. It first explores four relevant political projects that took place in Italy between the late nineteenth century and the Second World War –that is, liberal, Catholic, communist (more accurately, Gramscian) and Fascist modernities. A detailed section in the chapter on political Catholicism delves into the cohabitation between Catholic and Fascist visions of change that took place within Mussolini’s regime. In the following chapters, the book surveys how these competing projects evolved in republican Italy, by looking for instance, at anti-hierarchical revisions of socialism and some varieties of neo-fascism. Additionally, it investigates the political experiments currently taking place within Italian democracy. Finally, substantial space is devoted in nearly every chapter to relevant transnational entanglements between Italian notions of modernity, foreign ideas and organizations. Nevertheless, it would have been useful if more attention had been paid to these connections in the chapter on interwar Fascism, as this project was informed by foreign developments, in addition to influencing other countries with its ideology and regime model.[7]

The structure of the book is helpful because it allows each case study to be analyzed in a diachronic fashion. In this way, Forlenza and Thomassen point out how modern trends exert a varying degree of influence over various ideals and organizations, according to shifting circumstances. For instance, they depict Catholic modernity as a tendency that slowly developed within Church politics from the end of the nineteenth century, and that it affected the latter in a major way only after the Second World War.

Forlenza and Thomassen scrutinize these modern trends by focusing on the beliefs and activities of relevant political thinkers and leaders. For instance, the works of the priest Romolo Murri, with their strong advocacy of democracy, are used to emphasize the thesis that in the early 20th century political Catholicism was already, albeit tentatively, embracing modernity. Furthermore, the authors use this approach to highlight how Italian notions of renewal originated from engagements with the Risorgimento. For example, prominent thinkers such as Croce and Gramsci are shown to have elaborated their influential visions of change by drawing insights from Italy’s process of unification. Other methodological approaches, such as theories of political religions and analyses of public politics of memory and symbols, are also taken into account, especially when considering projects that became institutionally dominant. Notably, the authors argue that Italian Fascism was a modern phenomenon by highlighting this dictatorship’s pursuit of a revolutionary quest to create a cult of a new man, and its selective appropriation of ancient Roman and Risorgimento imagery to build a new, cohesive and homogeneous polity.

More generally, these various approaches are skillfully combined to support the thesis that political and existential crisis favored the institutional and social entrenchment of several projects under consideration. When studying these developments, the authors appropriately extend their focus beyond intellectuals and politicians. They meticulously delineate how the collapse of widely shared interpretative frameworks, during transitional times such as the Second World War, engendered dynamics of meaning formation that helped to consolidate alternative modernities within Italian society and politics. This kind of analysis is made cursorily regarding the turbulent aftermath of the First World War, while a much more nuanced picture is presented concerning the birth of the Italian republic and the revolutionary projects that mushroomed between 1968 and 1978.

In these two case studies, Forlenza and Thomassen create detailed juxtapositions between societal instability and the increasing popularity of radical visions of change. The especially interesting point is made that, at these turning points, the Risorgimento acted both as a vector of political stabilization and as a catalyst for extremism. With regard to patterns of normalization, it is pointed out how, after the “death of Patria”[8] that took place in the Second World War, widely shared notions of national resurgence created interpretative frameworks that resonated across political lines, in addition to providing crucial elements for the Italian republic’s nascent civil religion. Concerning trends of radicalization, the two authors highlight how different interpretations of the Risorgimento political myth guided the activities of diverse intransigent coteries, from diehard Fascists to some of the student groups of the 1960s and 1970s. As for economic factors, they are not central to the book’s focus. Nevertheless, they are persuasively used to account for the development of socialist, Catholic and far-right modernities between the 1960s and 1980s. These trends, it is claimed, were strengthened by their supporters’ beliefs that Italy’s rising affluence was leading national society towards spiritual anomie, a trend in opposition to which these projects defined themselves.

Forlenza and Thomassen are especially apt at conveying the relational dynamics between the projects under consideration. They argue convincingly that, as a matter of fact, the dynamics of competition were very influential in the development of each kind of modernity’s distinctive identity. For instance, they stress that recent Catholic notions of renewal, represented through the thinking of Augusto Del Noce, understood themselves in terms of “correcting” the beliefs and outcomes of their liberal and communist competitors. The authors are also careful to acknowledge instances of limited syncretism between alternative modernities, as in the case of the convergence that took place between political Catholicism and Fascism in the interwar era. They do not mention, however, that this episode of syncretism extended as far as to affect the Fascist political religion, which appears to have been influenced, to a certain degree, by Christian practices and symbols.[9]

The book’s primary sources consist mainly in literature and periodicals. The selection of secondary literature concerning the Italian case study is commendable, being very up to date and encompassing numerous prominent works on political, cultural and social history, from both Italian scholars and foreign specialists. Ultimately, the book’s argument is convincing, making an informed case for the centrality of nationhood in modernity and the innovative quality of Italian political projects and experiments. These arguments hold better in some points than others, however. First, the links between modernity and engagement with the past are delineated less clearly for the more recent case studies, such as the political practices pioneered by Silvio Berlusconi and the Five Star Movement. Second, the authors appear to have incurred in a minor methodological inconsistency. Specifically, in the chapter on Mussolini’s regime they point out the shortcomings of Jeffrey Herf’s analytical category of “reactionary modernism,”[10] but later incorporate it within their analysis of some neo-fascist currents.

Italian Modernities is nonetheless a detailed and insightful overview of Italy’s contributions to political innovation, in addition to providing a persuasive case for the need to pluralize modernity within academic discourse. Therefore, it is recommended to scholars focusing on the notion of multiple modernities, in addition to the closely interrelated one of “multiple democracies.”[11] Moreover, students of political anthropology and political religions will find stimulating insights in the book’s analysis of the processes through which ideologies and movements appropriate cultural symbols.

Eisenstadt, Shmuel N. “Multiple Modernities in an Age of Globalization,” The Canadian Journal of Sociology / Cahiers canadiens de sociologie 24, no. 2 (1999): 283-295

Blasco Sciarrino is a doctoral student in the Comparative History Program of the Central European University in Budapest. His research topic concerns the political activism of Italian and Romanian Great War veterans between 1918 and 1945 in a comparative and connective perspective.

The Anthropology of Intentions: Language in a World of Others

The Necessity of Moral Communication in a Pluralistic Political Environment