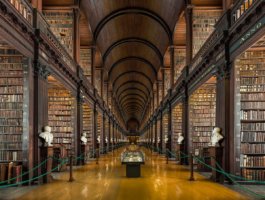 What Villanova should be famous for is its well-funded and brilliantly staffed ”great books” gen-ed alternative program and a real surge in “great books” humanities majors. The program really does has a Christian/Augustinian focus without in any way neglecting either classical or modern authors.

Now, according to Tocqueville, the point of higher education today is to be a countercultural corrective to the increasing pervasiveness of individualism, the “heart disease” that flows from the mistaken judgment that love and hate are more trouble (not to mention more dangerous) than they’re worth. Individualism is a kind of apathetic passivity that applies the Jerry Seinfeld dictum “not that there’s anything wrong with that” to everything your friends, neighbors, and fellow citizens might do. Individualism, as Tocqueville says, turns indifference into a virtue.

In accordance with Tocqueville’s thought that things are pretty much always getting better and worse, we remember individualism does have its merits. Being an individualist is pretty much the opposite of being a Puritan. The Puritans, of course, were sometimes ridiculously and tyrannically intrusive; they cared too much about what their fellow creatures and citizens were doing. So they tended to turn sins into crimes. A moderate amount of legal and personal indifference is required for any free society and are even characteristics of ladies and gentlemen. Even if I know that what you’re doing is bad for your body or your soul or your relational life, sometimes it’s best to back off and give you some space. Respecting freedom of conscience need not be based on indifference to moral truth, but it does depend on a kind of public indifference on many questions of soul.

It’s also true that aristocrats were too animated, generally, by intense personal love and the corresponding hate. Aristocratic love was unjustly limited in scope and so was accompanied by a rather cruel indifference to those not of one’s class. And being too animated by love and hate leads often to easily avoidable violence and senseless persecution.

These days, however, we’re too indifferent to the virtues of the Puritans. They were idealistic egalitarian reformers because they believed that the human creature has a soul or is more than a middle-class being with interests. So they were all for, Tocqueville reminds us, liberal education for everyone. And one residually puritanical feature of the America Tocqueville describes is the understanding of Sunday as for contemplation, for each of us reflecting on who we are as a singular beings with high moral responsibilities and immortal personal destinies. Unlike those leisurely, lazy aristocrats, the Puritans believed we were each born both to work and for leisurely reflection. Each of us has the middle-class responsibility of acquiring some set of skills and competencies required to flourish in the 21st-century marketplace, but each of us was made for and so should be educated for more than that. We should be worried more than we are about surrendering Sunday to commercial business and seventh-day recreationalism, just as we (but not the folks at Villanova!) should be worried more than we are about surrendering our colleges to one-dimensional techno-vocationalism and amenity-laden recreationalism.

Who can deny that in our time it’s individualism understood as the emotional truncation that causes promiscuous indifference to the dignified well-being of others that’s on the march? It’s at the foundation of the emotional gap that now separates the members of our “cognitive elite” from most of their fellow citizens, for example.

This was originally published with the same title in The Imaginative Conservative on April 17, 2015.

Taking a Chance on Love