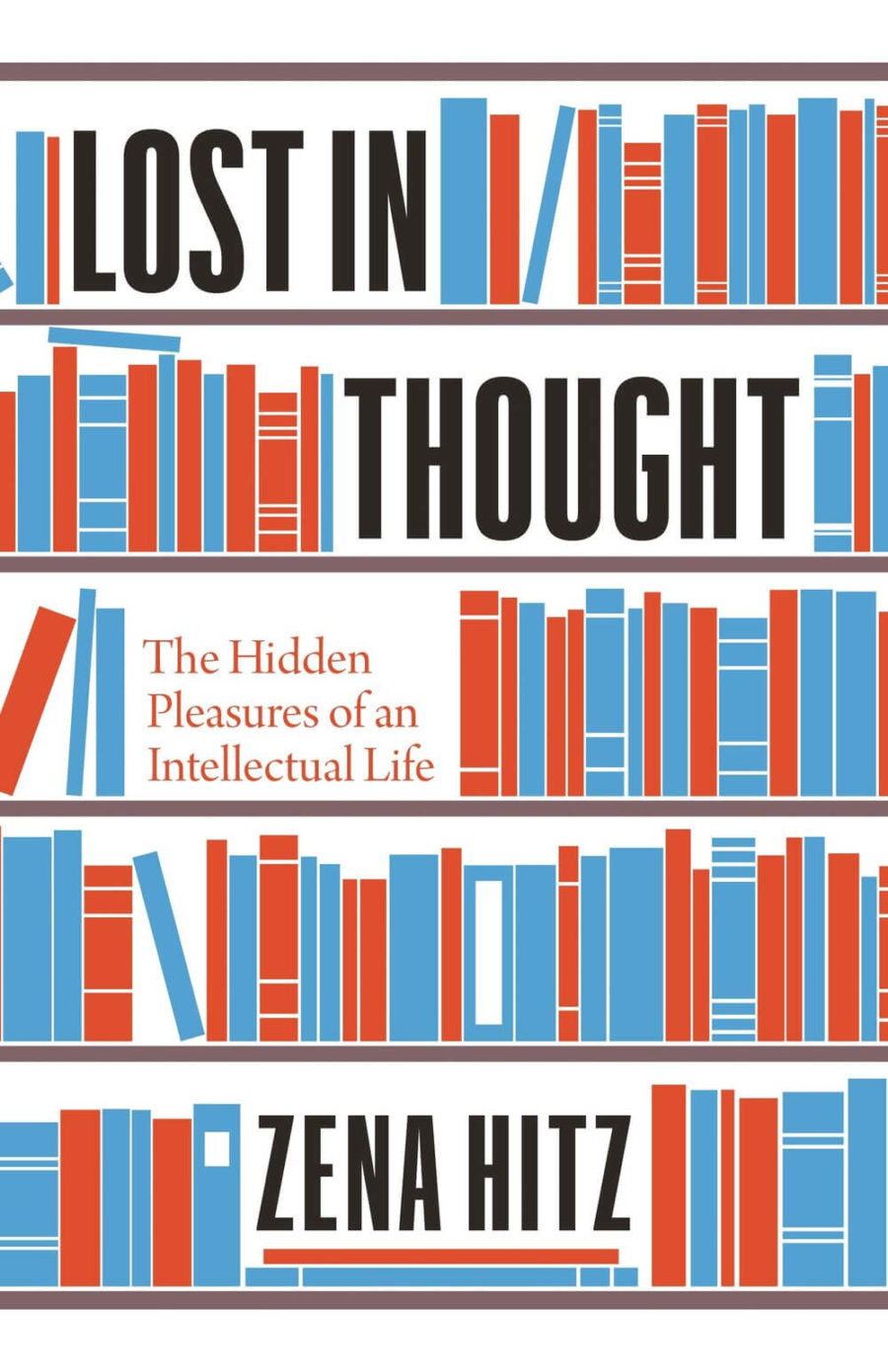 It’s tempting to argue that, faced with threats from narrow careerism, on the one side, and social justice activism, on the other, this is a good time for those of us who care about liberal education to contemplate its future. Zena Hitz’s wonderful Lost in Thought: The Hidden Pleasures of an Intellectual Life provides an excellent provocation to this sort of reflection. Hitz, a tutor at St. John’s College, offers a learned, wide-ranging, and deeply personal account of the promises and perils of intellectual life in our time.

Hitz’s account of intellectual life begins from a familiar point of departure.  Self-consciously following Plato and Aristotle, she speaks of a highest good, chosen for its own sake and not for the sake of anything else.  The pursuit of this highest good requires leisure (of a certain sort) and involves contemplation.  We can imagine Socrates “lost in thought” (as he was at the beginning of the Symposium), a philosopher living on the Isles of the Blessed (as in the Republic), or Aristotle intransigently insisting upon the superiority of the contemplative life, as he does at the end of the Nicomachean Ethics. But Hitz’s presentation of this life is both more democratic or egalitarian and more Christian than the “pagan” exemplars with which many of us are quite familiar.  She tells us that “the kind of leisure that functions as an ultimate goal of living does not require vast estates and the life of a country gentleman.  It can be taken in a moment, or in a long pause; it can fruitfully coexist with certain kinds of manual labor” (pp. 36 – 37).  Furthermore:

It is true that Aristotle conceived of contemplation too narrowly: sophisticated philosophy of the kind he practiced himself forms the core of his notion of happiness.  But it is evident that contemplation can be the relishing of the beauty of one’s family and its common life; the sophisticated calculations of the physicist; the admiration of the curve of wood being shaped into furniture; the nun singing the psalms five times a day; the therapist or teacher poring over their human examples (p. 44).

Hitz’s Christianity is evident from other considerations.  Her examples of contemplative life include the Virgin Mary (pp. 60 – 63) and St. Augustine (pp. 72 – 74, 128 – 140).  She conceives of intellectual life as seeing and ordering itself as “person-to-person service” (p. 48), not as something “merely” 729 times more pleasant than tyranny, as Socrates claims in the Republic.  She connects it with a kind of dignity, not happiness (p. 58; see p. 62).  And then there’s her argument that the life of the mind requires a kind of self-discipline or asceticism (p. 113), which sounds more Benedictine than Socratic, more at home in the monastery than in the agora.  I don’t mean to suggest that she simply excludes the Platonic-Aristotelian conception.  Her (nearly) final word on the subject is this:

If [learning] is for its own sake, we mean that we pursue it not because of external results but because of what it does for the learner.  But should we understand this effect on the learner as the grasp of the object of the desire to know, taken all on its own?  Or is the goal of learning for its own sake rather the connection with other human beings or with a transcendent being…?  I admit that I am not able to settle this question to my satisfaction.  Laying it before the reader will have to suffice.  Learning matters for its own sake, because human beings are essentially knowers, or lovers, or both (p. 112).

This pluralistic (I almost said catholic) approach carries with it advantages and disadvantages.  For example, I think Hitz is absolutely right in her critique of the modern university, which purports to be the principal locus of our intellectual life.  Her account of the anxieties and jousting for position that are so characteristic of top-tier graduate programs brought up painful memories.  (See: I’m ironically staking my own claim to status.)  Though she never uses the word, I will: we academics are for the most part sophists, teaching, speaking, and writing for money and for vanishingly small shares of status and renown.  I tell my students that virtually everything we find unpleasant about our university experience is the product of its instrumentalization for various non-intellectual ends.  They have to show up in class and complete assignments on “my” schedule because they want the credit and the credential.  I have to pretend to have something to say on the same schedule and to evaluate their compelled work (written whether or not they actually have anything to say) because I want, nay, I need, a paycheck.  If only we were all “scholars” in the original sense, i.e., people with scholê (leisure).  Although I quite regularly ask, I’ve never had a student tell me that he or she does not expect to have to work for a living.  In this context, Hitz’s picture of leisure found in bits and pieces around a life of work is much truer to our experience.  And I do mean “our”: the professorial life, with its teaching schedule and administrative burdens (for those of us who engage in a lot of “person-to-person” service), or its professional publication and grant-writing requirements (for those who are, well, not exactly blessed to find a home in a research university, where students—especially undergraduates—are to be avoided as much as possible), is no more leisurely than that of our students who find themselves employed in tech, financial, accounting, or law firms, or in healthcare.

Perhaps in this context it makes sense to argue that genuine intellectual life—thinking as an end in itself—requires askesis.  If we don’t subject ourselves to some kind of discipline, we’ll never be “lost in thought.”  Instead, we’ll instrumentalize both our gifts and our energy for the sake of “worldly” ends.  According to Hitz, there are four kinds of intellectual flourishing (p. 148): “the transformative discipline of the philosophical search for truth” (exemplified by St. Augustine), “an abyss-centered form of flourishing through philosophy,” a “pious form of flourishing through art,” and artistic creation at the edge of the abyss (exemplified by Elena Ferrante’s Neapolitan novels).  She spends time on the first and last of these, but leaves her readers to work out the other two for themselves.

Having less space and being more reticent than Hitz, I’ll focus my comments on her account of “the philosophical search for the truth” by St. Augustine.  In the first place, I note in passing that she does not apply the adjective “pious” to it, though she does to its creative counterpart.  Is St. Augustine supposed to represent all philosophers who pursue the truth with a capital “T,” as opposed to those who resolutely confront the abyss?  If so, I wonder where and how Socrates fits into this picture.  From St. Augustine, Hitz draws the distinction between “the person who is curiosus with the person who is studiosus” (p. 145).  This sounds a lot like the distinction that Socrates draws in the Republic between the genuine philosopher and the lover of sights and spectacles.  But there seems to me to be a difference between Augustinian studiousness or seriousness and Socratic playfulness.  Furthermore, Socrates’ account of philosophy is “erotic,” which seems not to require serious discipline or self-restraint to move from sights and spectacles to the forms or ideas, from opinion and becoming to knowledge and being.  Perhaps Socrates is extraordinary, and St. Augustine more ordinary, but I would also ask whether an account of the latter is faithful (so to speak) to his self-understanding and worldview would have to include some reference to the role of God’s grace in turning him to the life he ends up leading.  Certainly the St. Augustine of The City of God (e.g., XIX.4) would regard a “Godless” account of philosophy as indicative of an “astonishing vanity.”  (To be fair, late in the book [p. 193] Hitz says that “the love of learning that belongs to all human beings by nature… provides a natural good, one that can in turn be elevated by grace.  She perhaps disagrees with her exemplar here, not so much on the humanness of the love of learning as on how much its goodness depends upon God’s grace.)

I also wonder what drives and animates the studiousness of which Hitz speaks.  While Socratic eros might be a plausible candidate, she seems to focus more on a kind of escape from one’s circumstances and on a kind of dignity, i.e., rising above one’s circumstances.  It might be possible to be indifferent as between these motives, so long as they all lead to studiousness.  Discipline might thus be said to expand the possibilities for leading the life of the mind beyond the presumably very few Socratics out there.  Discipline might also be all the more necessary, since a longing for dignity and the desire to escape one’s circumstances would seem on their own to be capable of misleading those who feel these urges.  It surely is possible to mistake status for genuine dignity and entry into the cosmopolitan world of “choice” for genuine intellectual liberation.

Having spent some time quibbling with Hitz’s account of the life of the mind, I want to close by praising her undertaking.  Her critique of “our opinionized universities” is worth the cost of the book by itself.  Consider this passage:

“The diminishment of intellectual life caused by the opinionization of everything… demeans our students.  If we cultivate our college campuses either as echo chambers or as chocolate-box assortments of viewpoints, we think of young people first and foremost as receptacles of opinions, as consumers of content, and as subjects whose experiences must be carefully managed.  The difference is only whether the selection of opinions is curated by concerned officials or left to the open market… (p. 196).”

In her view, the marketplace of ideas, championed by latter-day disciples of John Stuart Mill, will not suffice.  We can’t just teach the debate.  We have to ask genuine human questions, and “remind ourselves of the questions that once gripped us.  We [academics] should reconsider our work, our choices, the broad scope of our lives in light of those questions” (p. 196).  This, then, is the ultimate reason for thinking about the life of the mind outside the context of the institution ostensibly devoted to it.  A university devoted to external goods, whether they be economic development or social justice, the advancement of the careers and causes of students and professors alike, cannot foster the life of the mind.  Absent the redemption on a large scale of these institutions—something for which neither Hitz nor I have much serious hope—we have to practice that life when and where we can, at the margins, snatching the leisure to be lost in thought wherever we can find it and sharing it with whomever is willing to join us.

That is a fitting reminder as we embark upon a new semester in a new year.

Joseph M. Knippenberg is Professor of Politics at Oglethorpe University in Atlanta, GA, where he has taught since 1985. He received his B.A. from Michigan State University and his M.A. and Ph.D. from the University of Toronto. His areas of specialization are the history of political philosophy (especially 18th century thinkers), constitutional law (especially the First Amendment), and liberal education. His essays and reviews have appeared in a variety of journals and edited collections. He currently sits on the Board of the Association for Core Texts and Courses.