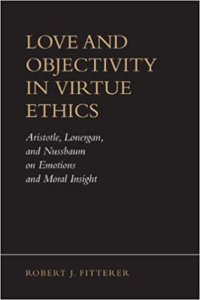 
Reviewing books on Bernard Lonergan is no small undertaking. The North American is famous for his panoramic understanding of the history of mathematics, economics, science, and Western philosophy. Writing on Lonergan requires a persistent attention to detail, a focused effort at intelligently understanding those details, and a willingness to suspend judgment until a large amount of detailed evidence is in.  In short, writing on Lonergan is not for the faint of heart.

Reviewing books on Lonergan is similarly challenging. Not only does the reviewer need to be intimately familiar with Lonergan’s work, he needs to understand how an author uses Lonergan to address a particular philosophical problem. Moreover, reviewing texts that enter Lonergan into dialogue with philosophers like Aristotle and contemporary American philosopher Martha Nussbaum can be especially arduous. Fortunately, Fitterer’s book, Love and Objectivity in Virtue Ethics, is a clear exposition of what such a thoughtful conversation can look like. He brings insights from these thinkers together in a deep exploration of the central role compassionate love plays in moral discernment.

In a detailed argument, Fitterer demonstrates how emotions have been neglected in the search for objectivity in the formation of defensible moral judgments and decisions. Given the Enlightenment’s distaste for the emotional, Fitterer shows how an overemphasis on the rational is ill-founded. Drawing on the virtue ethics of Aristotle, Lonergan’s notion of the apprehension of genuine value, and Nussbaum’s discussion of cognitive emotions, Fitterer develops a virtue ethics that is rooted in ancient philosophy yet familiar with current developments in metaethics.

Essentially, Fitterer seeks “to show that living well requires loving aright” (p. 3). Objective moral judgments occur in people who are empathic, morally sensitive and emotionally intelligent. Accordingly, virtuous people can make sound moral judgments in concrete situations. He grounds this argument in (1) Aristotle’s notion of phronesis, (2) Lonergan’s cognitional processes operating within an authentic, human subject, and (3) Nussbaum’s focus on the role of cognitive emotions in moral judgment. Fitterer’s holistic notion of what it means to be morally objective within the context of a virtue ethics is, indeed, creative.

Love and Objectivity in Virtue Ethics is divided into four sections that carefully outline and explain the relevant, moral concepts from Aristotle, Lonergan, and Nussbaum. The book ends with a final chapter synthesizing all three into a virtue ethics grounded in compassionate love. Fitterer’s exposition of Aristotle’s concept of phronesis is concise yet appropriate; clarity is not achieved at the expense of density. His exposition of how Aristotle envisages the formation of moral insights within particular and concrete situations is well supported with abundant references from the Nicomachean Ethics. In turn, his analysis of Lonergan’s cognitional theory or generalized empirical method is persuasive. He accurately describes the role Lonergan allocates to insight in all areas of human understanding; specifically in the formation of moral insights. The connection to Nussbaum in supplementing inadequacies found in Lonergan’s position on the role of emotions when forming moral insights is both corrective and complementary.

Specifically, in justifying a notion of objectivity for virtue ethics, Fitterer addresses the problem of human subjectivity in making objective, moral judgments. In Aristotelian terms, he explores how the socio-historically conditioned phronimos, engages in phronesis, in order to know and choose the genuine good. The standard answer, the good is just what the good person would choose (p. 33) is not left unexamined. Like the committed externalist, Fitterer is not unaware of the potential circularity of such a position. Moreover, issues regarding bias, cognitive and emotional interruption, prejudice, and indoctrination are of concern to anyone wanting to ground moral objectivity in a virtue ethics. For example, the impact of bias on judgments of value at the individual and social levels is self-evident. History clearly shows how people can make very bad moral judgments. Not unlike the issue of circularity outlined above, Fitterer addresses these dilemmas with confidence.

In part, he does so by invoking a “notion of moral objectivity that is based in a well-functioning human subjectivity” (p. 34). He draws upon Lonergan’s notion that objectivity is the fruit of an authentic subjectivity. Accordingly, authenticity in the subject is seen to ground objectivity in judgments of fact and value. In order to make such a claim, however, Fitterer needs a philosophical method that is attentive to the role of insight in moral discernment that remains context-sensitive without falling prey to forms of particularism. He finds such a method by combining salient insights from Aristotle, Lonergan, and Nussbaum. In dialogue with Aristotle’s notion of phronesis, he uses Lonergan to demonstrate how the phronimos gains objective moral insight into a particular, concrete situation.

Beginning with the wonder that raises questions about the content of experience, Fitterer outlines how we naturally develop moral insights in response to those questions. Given the natural dynamic or exigency of human knowing, the moral agent poses questions for intelligence to his experiences: What is the moral thing to do in this particular situation, what is the genuine good to be achieved?  These questions seek answers that take the form of concrete, moral insights into what we should believe and do. They can be insights into an immediate context requiring action, the utility of a moral concept or theory, the reliability of a particular method grounding moral inquiry, etc.

In any case, inquiry ensues, and a moral insight occurs that may or may not be warranted. Fitterer shows how Lonergan situates these cognitional processes at the level of understanding from within an unrestricted desire to know (p. 34). Notably, all insights in response to questions remain open to the self-correcting process of learning. Moreover, Fitterer illustrates how these cognitional processes occur in a number of varied contexts: in the realm of theory, common sense and interiority (p. 72).

But the authentic human subject is an inquisitive sort who asks questions about the quality of his insights. As such, our natural curiosity moves us to assess the accuracy, precision, depth, breadth and relevance of our moral insights. Hence, as moral agents, we pose questions for reflection to our moral insights: Is this truly the moral thing to do in this particular context, is this the genuine good to be pursued in this concrete situation? These questions for reflection seek answers that take the form of moral judgments that are either modal or absolute: It is/probably is the case, It is/probably is not the case.

This movement from insights occurring on the level of understanding to those arising on the level of judgment is foundational for Fitterer’s project. He needs to demonstrate how the desire to know moves the knower from forming those moral insights to appraising their quality. He describes this movement as a natural dynamism, showing how “query seeks reasons for assent and, formulating the insight into a conditional, seeks the fulfilling conditions that would provide these reasons” (p. 49). In Lonergan, this is what happens when a moral agent grasps the virtually unconditioned. In short, a moral insight, like any insight, is accurate to the degree the conditions that would justify it, are in fact, present or fulfilled (p. 39).

Grasping the virtually unconditioned simply means the conditions needed for making a moral judgment are present. It adds nothing to the moral deliberation other than identifying a particular relation between the moral insight and the presence of those conditions that confer warrant. As such, Fitterer’s use of Lonergan’s notion of the virtually unconditioned offers a reliable way of grounding moral objectivity in both a particular context and a quality (virtue) in the moral agent. In doing so, Fitterer shows how Lonergan’s cognitional processes have empirical (experiencing), rational (judging) and existential (deciding and acting) components that work interdependently; very much like biological systems in the human body. Such interdependence avoids the pitfalls of reductionism and varied forms of elimitavist-materialism.

But what is the role of the emotions in this highly intellectualist yet interconnected outlook on moral discernment, and how can it foster objectivity? These are important questions for any virtue ethicist, and Fitterer draws upon both Lonergan and Nussbaum to answer them. He claims that Lonergan’s position on the capacity of emotions to apprehend genuine value (p. 45) although engaging, remains undeveloped. His assessment of Lonergan on this front has merit. As such, Fitterer’s decision to introduce Nussbaum’s neo-Stoic theory of cognitive emotions (p. 74) is, in turn, a wise one.

Briefly, Nussbaum argues that emotions are not good per se but good in relation to what they affirm or deny (p. 89). For example, a love that gets it right does so because it consciously or otherwise, appeals to sound criteria: recognition of the unique individuality of persons; reciprocity in human relations; and mediation of mercy and justice through compassion” (p. 89). Because emotions are judgments concerned with value, they are deeply and closely connected to our own personal well-being (p. 75). But this connectedness may be problematic on a number of fronts: susceptibility to bias, error in evaluation, movement from the general to the specific, failure to distinguish background from situational feeling, etc. (p. 77).

Here Fitterer makes another significant contribution to research in the field. He is critical of Nussbaum’s confusion between perception/ apprehension and judgment proper (p. 78). In other words, he argues that Nussbaum needs to clarify the necessary distinctions between “emotively recognizing a possible value and the judgment of value itself” (p. 79). In trying to avoid a slippery slide into either emotivism or rationalism, Fitterer develops his own approach that respects the subjective dimension of virtue ethics without succumbing to an individualism that eschews objective criteria when making reasoned judgments of value.

In my view, Fitterer’s theory of performative or procedural objectivity (p. 98) accomplishes the task set out before it. Grounded in compassionate love, the authentic person, applying Lonergan’s generalized empirical method, can arrive at objective moral judgments in concrete and particular situations (p. 94). Taking hold of Lonergan’s method while being in the grip of love-as-compassion, one is moved to desire the good for oneself and others; working out our eudaimonia together (p. 94). So, in light of Fitterer’s thesis that living well requires loving aright, does he effectively describe what the phronimos does when he has an objective moral insight? I believe he does. In essence, having an objective moral insight involves (1) continually yielding to the exigencies of the pure desire to know, (2) making a sustained effort to function as a critical and authentic human subject always aware of the danger of bias, and (3) desiring to feel with love-as-compassion towards oneself and others (p. 95).

For Fitterer, when confronted with a moral dilemma, the moral agent poses questions for intelligence and reflection to his moral problem-as-experienced, has a moral insight into what is genuinely valuable, and deliberates upon future courses of action. This process occurs within a horizon of love-as-compassion, and remains continually open to the self-correcting process of learning. In Fitterer’s approach to virtue ethics, this is how the authentic moral agent lives well by loving right.

Love and Objectivity in Virtue Ethics successfully situates virtue ethics in Aristotelian philosophy while effectively entering that tradition into critical dialogue with Lonergan and Nussbaum. The outcome of the conversation is an exciting and challenging book that makes a genuine and critical contribution to literature in the field.

Lance Grigg is an Associate Professor of Education at the University of Lethbridge in Canada.

Michael D. O’Brien and the War between Good and Evil in an Incarnational Universe

Pride Goeth Before a Fall: Humility too?