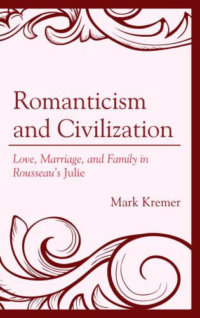 In the summer of 2018, I wrote a piece of scholarship that was published on, The Imaginative Conservative, titled, “When feelings became facts: Burke, Rousseau, and today’s outrage culture.” The title was borrowed, in part, from Ben Shapiro’s catchphrase, “my facts don’t care about your feelings.” According to the scholarship, Jean Jacques Rousseau’s immensely successful novel, Julie or the new Heloise, was the work of popular culture that established the ethic of a person’s feelings and emotions as the basis of morality. This is the essence of Shapiro’s sentiment.

If someone is reading Julie today, they are unlikely to grasp the novel’s cultural importance. As the philosopher, Ernst Cassirer, wrote of Julie: “Today, the Nouvelle Heloise as a whole is remote from us; we cannot feel the immediate impact of the force with which it moved and shook Rousseau’s century.”[1] With this novel, Rousseau replaced the concepts of restraint and rationalism with the idea of feelings and emotions as the prime motivators of human conduct. As Cassirer explained of Julie’s impact:

Feeling is now raised far above passive ‘impression’ and mere perception…. It no longer appears as a special faculty of the self but rather as its proper source—as the original power of the self, from which all other power grow.[2]

Admittedly, I never quite understood exactly how this occurred. I understood the concepts that Cassirer addressed, but I was never quite able to grasp how Rousseau, via Julie, facilitated this transition. Even after reading Julie myself, I was still left wondering how exactly Rousseau’s novel impacted the world.

Mark Kremer’s succinct, yet pithy study does a fantastic job of explaining how the phenomenon of feelings replacing restraint and logic as the basis for morality, occurred. Kremer detailed that, “Julie must choose between love and the attachment to her parents. She must probe her heart and understanding to make her decision.”[3] Essentially, “Rousseau’s weakening of traditional authority paves the way for a natural religion that moves from sentiment and observation to belief.”[4]

Kremer asserts that the way Rousseau accomplishes this is by changing the nature of parental authority. According to Kremer, “Rousseau reforms the meaning of paternal authority. . . . he presents an engraving of the newly understood force of the father.”[5] Rousseau flips the script and reverses the roles of child and parent, daughter and father. Kremer interprets Rousseau’s text to mean that, “he showed us an image of a hero kneeling before a poor bourgeois asking for forgiveness, he shows us a father kneeling before his daughter begging for pity.”[6]

Kremer makes the point of explaining to his readers that, “One cannot underestimate the importance of the situation. The scene is the culmination between the conflict between love and paternal authority, it prepares the ground for the conflict between love with marriage and family.”[7] Through this act, Rousseau is directly subverting the idea of parental authority, encouraging his readers to follow their hearts, and not listen to their parents as authority figures. Not only that, but fathers must now bow to the will of the romantic impulses of their children. This is the forerunner for all of the modern romances that suggest the only thing we need to do is follow our hearts, and listen effortless to our heart’s command. Everyone who stands in the way of our impulses is wrong, and should eventually ask us for our forgiveness for getting in the way in the first place.

Kremer truly grasped the thrust of Rousseau’s new ethic. He writes that:

“For the first time in her life, she openly disobeys her father and discovers that her love has made her more obstinate than him. Unable to force her through authority, he falls to his knees and begs Julie not to send him to his grave as she did her mother.”[8]

Julie has disobeyed her father’s paternal authority, yet despite this, he still needs to win her back. The only way her father can win her back is not through paternal authority, but through guilt and pity. Julie’s father knows that she will eventually have the authority over him in his old age, and he begs her to take pity on him. Kremer relays this newfound scenario thusly: “One cannot pity what is insensible. Her father is obeyed, but it is from the force of humanity, rather than the fore of authority.”[9]

This description of the interaction between parents and children may sound tame by our standards, but we must remember when reading this that in Rousseau’s day, there were no television shows depicting this type of behavior, nor were there any other forms of media like this in existence. Rousseau’s Julie was truly the first of its kind.

This book is highly recommended for the serious student and scholar of Rousseau, romanticism, and anyone interested in learning about the changes western civilization is experiencing through liberalism. Admittedly, Kremer’s book is not an easy read. The nuances and subtleties of Julie are well articulated, but they are not for the novice and fair-weather reader. This book is a great piece in the puzzle that explains Rousseau, liberalism, and how contemporary society got to its’ present position.

An excerpt of the book is here and Paul Seaton’s review here.

Steven Kessler received his Ed.D. from the University of Rochester in Higher Education Administration. He is the Edmund Burke Society Fellow at the Russell Kirk Center for Cultural Renewal. He has published in places like "The Conservative," "The European Conservative," "The Imaginative Conservative," and "The Journal of Liberal Arts and Sciences."