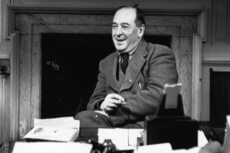 Why is C.S. Lewis loved so hard by so many people?

He was a man of wide reading (very wide reading), but as a scholar he was no Rosemond Tuve, and certainly no Voegelin. He produced few hard-core academic articles. His most famous scholarly work, The Allegory of Love, is learned, entertaining, and evocative, but its reader; rarely feels the pressure of massive intellectual muscle.

In his apologetics, he wrote as an amateur, and said so. He certainly did not have the theological chops of Josef Pieper. He never learned Hebrew.

Personally, he had some louche angles. He had no anti-Semitism but on two or three other grounds he was a bit of a chauvinist. He smoked and drank like billy-o.

Yet Pieper is a memory and Lewis rolls on like the deficit.

Your columnist has been reading Lewis since childhood, and would argue that he excelled in three points.

First C.S. Lewis provides something for all ages. The child will find the Narnia stories. The adolescent will find the Screwtape Letters like a lion in his path. In college, there are literary essays, especially that book on Milton. Later in life, the novels, and later still letters. Also, A Grief Observed.

This talent for introduction has several sources. CSL seems to have been graced with easy enjoyment and he liked what he studied. In fact, he seems to have liked almost everything it was possible to like. One felt he would have liked you.

Liking what you do, is neither a given nor a small thing–Houseman was a great scholar but he hardly liked anything, especially Manilius. Also, intensive tutoring and lecturing had taught Lewis how to communicate, again by no means a given. He knew that communication was not just the transferring of facts, but persuasion that the facts were such as you would do well to remember. Moreover he had at hand a lot of facts to communicate.

He brought with him a familiarity with the full western cultural heritage—Greeks, Romans, the medieval world and the renaissance. And he presented himself as a creature of that heritage.

Such a man can be the doorway a lot of new things. There are treasures in his shop, he knows his stock and he knows his customers. Lewis was not the end on any subject, but he was often a very good place to start.

The third important reason for our author’s continuing Amazon rankings  is trickier to explain.

One might call Lewis the last Taoist, not in the Chinese sense, but in the sense the author used it in that short and dangerous book The Abolition of Man: that is, someone who affirms the reality and validity of the “main road ” of ordinary human morality.

The Tao is instantiated differently in every culture, but unified in its main characteristics. It admits, demands, from those who owe it allegiance continual improvement of the local practice To those outside it appears as heller Unsinn, but outside of the Tao, there are no grounds for moral judgments anyway.

That is all very nice, although a little dry. But consider the consequences.

CSL is a man, who, when you refuse a bribe, will argue that you are not a fool, despite what your brother-in-law says.

He would affirm that not only do you love your spouse, but you are right to do so and you have a right to do so. To do so is not a twitch from socio-neuro-econo-psycho-historical conditioning but an act of reason—the recognition of happiness and the pursuit of same. Noesis, in fact.

By CSL’s arguments, to follow a transcendent call along the Tao is to have a life not built on a black abyss of futility.

Now it is possible consider the “Tao” to be a lot of applesauce. But there is no doubt that for about 99% of the human race, this is what they want to hear. Someone who defends the Tao, defends them.

Further, like Samuel Johnson, Lewis not only defended morality, he took his licks trying to follow it. This involved a good deal of falling down, and getting back up again. As an example, he is intensely attractive, because his life suggests that you too don’t have to be defeated because you’re knocked down.

You just to have to be right and keep on coming.

Given all this, it is hardly surprising that Lewis goes marching on. I suspect he will be an influence for good, for a good while to come.

On the Narcosis of Narcissus

Hobhouse and Leadership: A Consideration of Liberalism

Servile Oblivion and the End of Education