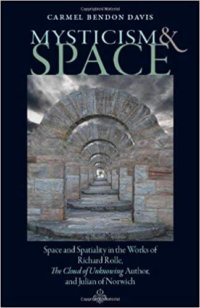 Mysticism and Space: Space and Spatiality in the Works of Richard Rolle, The Cloud of Unknowing Author, and Julian of Norwich. Carmel Bendon Davis. Washington D.C.: Catholic University of America Press, 2008.

“The concept of mysticism,” the author of Mysticism and Space, Carmel Bendon Davis, warns us “is not straightforward.” Consequently, Ms. Davis provides the essential meaning of the word in her seminal study: Christian mysticism is the product of pseudo-Denis whose work, Theologia Mystica, perceives mysticism as the secret knowledge of God, a definition pregnant with the possibility of Gnostic distortions. That the author is not derailed because of the Gnostic possibilities indicates that her work is neither eristic nor philodoxical, but rather an example of existential consciousness analyzing the revelatory process. Further, Ms. Davis, in quoting the scholar David Knowles, does the great service of noting that “(M)ystical theology is thus distinguished from what is called natural theology and from dogmatic and speculative theology.”

The author has touched upon a dilemma facing Christianity identified by the mystical philosopher, Eric Voegelin, in his essay, The Gospel and Culture:

“In the historical drama of revelation, the Unknown god ultimately becomes the God known through his presence in Christ. This drama, though it has been alive in the consciousness of the New Testament writers, is far from alive in the Christianity of the churches today, for the history of Christianity is characterized by what is commonly called the separation of school theology from mystical or experiential theology which formed an apparently inseparable unit still in the work of Origen.”

The challenge confronting the church is not how to adapt various philosophical and theological distortions to orthodoxy but rather to render the epiphany of Jesus Christ as experientially “alive in the consciousness” of modern man. Ms. Davis’s book is an effort to address this crisis by means of an erudite analysis of the noetic, pneumatic, and spatial components occurring in human time and divine timelessness. The academic debate encompassing mystical or “meditative” and “contemplative” experience exists in the tension between the poles of the “socially constructed phenomenon,” and “the authentic experiences that they represent,” where the latter represents a “closed existence” and the former an “open existence” in the question of non-existent realities.

One of Ms. Davis’s unique contributions is her application of the concept of space, a response to Michel Foucault, that explicates the “multiple levels” of the mystic’s “physical and social environment, as well as their individual mystical experiences and the elaboration of those experiences in textual form.” Here, in a rather significant example of a pneumatic irruption, Ms. Davis applies the French literary device, mise en abime, to the mystical experience as “successive, perhaps concentric, layers of space as analogous to the various strata of experience that are constitutive of mystical space.” The mise en abime, reconceptualized by the author to apply to the problem of mystical space, then acts to explicate God as intrinsic to the human psyche, the noetic pull phenomenon experienced in the tension of existence, as well as “the image of God as the container of all humanity…”

The exegetical brilliance of Ms. Davis’s work incorporates elements of Henri Lefebvre’s theory of space including his discussion of social space as inclusive of spatial practice, representations of space, and representational spaces; Pierre Bourdieu’s habitus, the unconscious “understanding of the way in which societal structures predispose societal members…toward certain social practices;” Foucault’s heterotopias, which are places “outside of all place, even though it might be possible to indicate their location in reality…a sort of simultaneously mythic and real contestation of space in which we live;” and Mikail Bkhtin’s grotesque realism which formulates the concept of “the fruitful earth and womb. It is always conceiving,” though the author is utilizing the reversal of this theme in reference to the mystical life. All of these concepts, then, are utilized in “decrypting” the texts of three mystics of the fourteenth century: Richard Rolle, the Cloud author, and Julian of Norwich.

The work is further differentiated by penetrating examinations of physical space and cosmology, the “ways in which the mystics valued their society,” the textual insights that illustrate God as inherent within the psyche/soul and “the containment of humanity within God,” and finally, the “individual mystical spaces” of the three medieval contemplatives. Mysticism and Space is then a brilliant apologetics for a largely ignored, mystical Christianity richly imbued and bolstered with the primary experiences of the medieval contemplatives. It is a work that answers the deformations inherent in the Hegelian synthesis responsible for the second realities of the postmodern age, explores the nature and structure of the metaleptic event, and successfully recovers the symbols of the tension of existence that are translucent within the reality experienced in the drama of the Gospel of Jesus Christ.

In the epilogue, the author tells her readers that “the texts point beyond time and history to an experience that is beyond material containment,” which correlates with Voegelin’s comment in his essay, Immortality, that “Man, while existing in time, experiences himself as participating in the timeless.” Davis’s contribution is her remarkable exegesis of the nature and effects of spatiality within the metaleptic event, where being exists in existential philia, and where “the openness of existence is raised to consciousness.” Mysticism and Space is a remarkably illuminating book that illustrates the need for the Christian church to return to an existential theology that recognizes “the mystery of divine presence in existence.”

Give Me Liberty: Studies in Constitutionalism and Philosophy

The Work of Art: Value in Creative Careers

The Intrinsic Incoherence of the Secular University