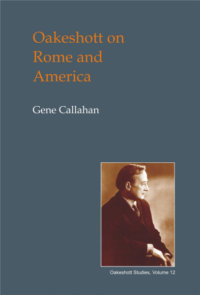 Oakeshott’s critique of Rationalism is the most famous part of his corpus and also the most misunderstood and controversial. From the 1940s and into the 1960s it was bold and necessary to criticize the ideological style of politics and large scale social planning. Since the predominant tendency of post-war planning was left-leaning, Oakeshott’s critique led to his being called a conservative. He repeatedly claimed, though, that his critique bore equally upon right and left Rationalist projects.

In spite of the controversies over his attack on Rationalism, he has come to be regarded as perhaps the greatest political philosopher of his time. Oakeshott’s view of situated reason is now widely shared, and recognition of his contributions to political theory and philosophy has grown. And his critique of Rationalism is still relevant.

While the great schemes of the post-war period have become less fashionable–in part because of the success of planners in putting vast new areas of social life under government control–there is still an abundance of Rationalistic thinking, especially in America, where, in political debate, one continually hears invocations of “first principles” and “self-evident truths.”

Callahan provides numerous examples from among the Founder’s abundant Rationalistic utterances and draws on several historians including Bernard Bailyn, Gordon Wood, Bruce Ackerman, and others to build his case. He also draws on scholars like Ellis Sandoz and Forrest McDonald to point out that in spite of their numerous Rationalistic pronouncements, the American founders occasionally show an awareness of the limits of Rationalism, and emphasize the importance of experience and practical judgment. The founders chose to obscure their own intimate relationship with tradition, and emphasize the newness and rationality of what they were doing.

Like Burke, Callahan suggests the Founders quietly followed tradition in spite of their noisy Rationalistic espousals. A legacy of the Founders’ Rationalism is the belief that political success depends on a clear vision and firm principles to guide the pursuit of a mission. In America’s main political parties, to say someone lacks principles is a criticism regardless of what principles are supposedly lacking. Any principles are better than a lack of principles.

Moreover, the criticism does not mean a person has no scruples. It is not a moral criticism but an intellectual one. A politician “without principles” means someone who has not demonstrated a commitment to a clear ideology that will guide his or her political choices.

Callahan does an admirable job of elucidating Oakeshott’s ideas on Rationalism, which, reduced to a phrase, is the belief in the sovereignty of technique. By discovering principles, the Rationalist hopes to have a guide to political action analogous to scientific methods. For Oakeshott, those principles are not axioms or techniques that can guide political conduct but post-hoc abridgments of traditions. An ideological principle is not false or illusory, but foreshortened and much less valuable than the Rationalist believes.

But what is more important, Callahan also spends considerable time in what may be called a “de-ideologization” of Oakeshott. He goes after some right wing ideologues with verve, a long-overdue contribution to the scholarship, vindicating Oakeshott’s claims that he was not writing in support of a partisan position.

Readers of Oakeshott know he employs numerous two-fold contrasts. Great care is required to state Oakeshott’s position in order to show which linkages are necessary and which contingent, all the while showing why they do not amount to an ideology. Callahan is admirably clear and precise in this regard, but he does not deal exhaustively with all these distinctions, which would be outside the scope of his book. But he does raise the issue and make it a thematic concern. For this alone his work is worth the reader’s effort.

Callahan deftly treats the non-coincidence of traditionalism and political skepticism in a superb take-down of Murray Rothbard and other libertarian ideologues. The libertarian persuasion is an ideological commitment to limited government. (The neo-conservative persuasion, also ideological, has different aims; asking which one is “really conservative” is typical of the Rationalist mindset.)

While it may be worthwhile to think about limiting the scope of government’s activities, it is misleading to expect a set of rational principles to provide fool-proof guidance in doing so. However much we may regret the build-up of the welfare state (or the national security state, or the oligarchic-capitalist state, take your pick), we cannot just “scrape the lot” and build anew. The conviction that one is simply right, that one has a blueprint, duly signed and stamped by the relevant social engineers, is a great first step on the path to hellish policy mistakes.

Callahan makes clear that this is not a doctrine of pessimism or resignation. Rather, it is the sober recognition that the healing needed for political disorders has to come from resources within a tradition. Political action, as Aristotle taught, has to be attuned to the concrete realities of what is possible in a given situation, not what might be ideally the case if we abstract from our current circumstances. It is the responsible refusal to abstract, and to deal with things as they are that characterize the Oakeshottian statesman.

He uses the cases of Roman and American political experience to test Oakeshott’s claims about the inadequacy of Rationalism. He finds that the Romans, lacking a written constitution, nonetheless continuously ruled for many centuries. The Americans, by contrast, placed their faith in a written instrument based upon supposedly self-evident principles. How has the American constitution fared? Violations of the Constitution’s letter and spirit began to occur almost immediately after ratification, as did discoveries of its non-comprehensiveness.

Callahan uses the example of the election of 1800 to show how Constitutional expectations were not met in the contingent realities of electoral politics. He spends a substantial time on Jefferson’s failures to live up to his stated ideals. He argues that this is not hypocrisy.

The Rationalist articulates ideals but cannot translate them into practice in a straightforward way. Whether it is a matter of holding slaves, allowing prosecutions of one’s opponents for sedition, purchasing vast tracts of land, or imposing an embargo, Callahan argues that adequate practical decisions cannot be derived from a statement, however, sincere, of one’s political ideals.

Callahan’s findings, like Oakeshott’s original arguments, will be vexing for American conservatives as well as libertarians, nor will they provide comfort to liberals. The reflexive tendency of the Rationalist (and most Americans are Rationalistic in their politics) is to apply greater doses of Rationalism to every controversy or conflict.

If our principles have proven to be less than perfect guides, it will be said, then we need better principles. If contingencies have forced us to interpret and apply the Constitution rather than follow it mechanically, this is because we are insufficiently devoted to the original meanings, which we should strain to recover. To say that politics can never be reduced to a technical and demonstrative activity will be seen as boorish.

It will be good for politicians, scholars, and plain citizens in America and elsewhere to be vexed. Callahan also provides telling examples of attempted nation building and Constitution writing in various countries where success has proved elusive. It may be hoped that confronting a position like Oakeshott’s will lead at least a few to consider whether parchment provisions suffice to preserve liberty and the rule of law.

What may seem like an attack on Reason is really a humble recognition of the partnership we share with past and future. A tradition does not change quickly, so we must not expect Rationalism in America to simply evaporate, even when exposed to Oakeshottian light. But that is perhaps not relevant. If we see that the Founders were Rationalist in their intellectual style, but skeptics in their governing style, that their manner of argument did not necessarily imply a manner of governance, we may learn better how to listen to them, when to really listen, and when to nod politely.

Callahan opens his book with a brief reflection on Iraq and returns to the Iraq example later (1-2, 72, 81, 100). In late 2003, a newspaper columnist suggested, by way of justifying his own support for the Iraq invasion, that the Bush administration had taken an “Oakeshottian” approach, merely “muddling through.”

That was unfair to Oakeshott. The pursuit of intimations is never a matter of “muddling.” A self-deprecating defender of practical knowledge may be tempted to frame it that way to mock Rationalistic pride. But the skill acquired through experience is not any the less real for not being precisely communicable in a brief rule-book. On-the-fly adjustments work because they are the outcome of extensive practice.

At any rate, Oakeshott never made foreign policy recommendations. Nor is Callahan trying to develop an “Oakeshottian” strategy. But his book invites one to consider if a non-Rationalist approach to politics would really change anything. The same columnist admitted that an Oakeshottian awareness of the role of tradition would lead to skepticism about America’s ability to spread democracy in the Fertile Crescent. For someone wanting to “argue with Oakeshott,” this line of thinking would have been more fruitful than to seek justification for policy drift in epistemology.

Politics is rooted in long-standing, complex traditions, the products of human choices but not of any individual’s design. “Tradition” after all, is an abstract noun standing for the manifold of collected, dynamically interacting self-understandings of countless individuals. So to change a culture is to initiate a set of unpredictable ramifications.

Acknowledging this might give one pause in launching an offensive strike against a far away nation with very different traditions than America’s, in the hope of spreading democracy by force of arms. Callahan points out that only in Rationalist fantasy could the chief improvement brought to a conquered country collapsing into civil war be to provide a written constitution.

Not being devoted to ideological consistency, an Oakeshottian can appreciate the irony of a self-styled “exceptional nation” that began its life as an unimportant backwater conducting an experiment in the preservation of individual freedom, coming to see itself as founded on principles that obligate it to militarily impose a uniform cultural solution on the entire globe.

This book is a welcome addition to the ever-growing secondary literature on Oakeshott, as it insightfully clarifies the concept of Rationalism and shows that Oakeshott’s theoretical concepts can be deployed to examine concrete historical cases.

The Coen Brothers and the Comedy of Democracy

The Way of the Stars