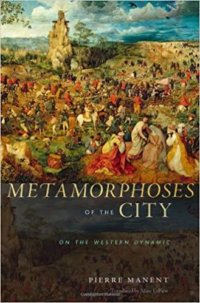 The Metamorpheses of the City: On the Western Dynamic. Pierre Manent with Marc LePain, trans. Cambridge, MA: Harvard University Press, 2013.

One of the most intriguing ways that the crisis in the Middle East has captured the attention of the West in recent years is that regional war, ethnic and sectarian strife, and governmental collapse have enabled some commentators to forecast the end of the modern nation-state system, both in the Middle East and in the West. Though an increasing number of scholars and pundits imagine the future of the Middle East in this way, serious consideration of the foundations of the nation-state system itself have been absent from public discourse.

In his new work, Metamorphoses of the City: On The Western Dynamic, Pierre Manent considers the past, present, and future of political life in the West. Specifically, the book provides three important insights into the political and spiritual direction of the West in general, and of Europe in particular. Students of the history of political thought, political theology, and international relations would all benefit from Manent’s engaging work.

The first notable contribution of this work is a persuasive account of the transition of political forms from the city-states of antiquity to the empires that followed, to the nation-states of modernity. It is easy enough to observe varying political forms in different historical periods. Manent has taken on a more difficult task, though, by seeking to explain how and why one form transitioned to another. He begins his analysis with the Greek city, because this was “the first complete implementation of human action” and the “first form of human life to produce political energy.” He is not dismissing as unimportant all that came before the Greek polis, but he finds it to be the most sensible place of departure for one who seeks to trace Western political history. For geopolitical reasons the city could not last as the sole form of common life. The city (in some parts of the Western world) evolved into empire. This movement toward empire was not total, though, as late antiquity saw the coexistence of both cities and empires in the Western world. (Importantly, Manent notes that the imperial phenomenon existed in the East as well, but is careful to position himself as an examiner only of Western empire.)

Into this world of newly mixed forms arose Christianity as a political and philosophical force. The “Christian Situation”, as Manent calls the growth of the Christian religion, introduced an incoherent social structure into the West. Now, claims of authority were divided between empire (or city) and church. The former demanded loyalty as the highest progenitor of the common good, while the latter inculcated in Europeans otherworldly ethics and allegiances. This incoherent social structure could not persist indefinitely, in Manent’s view. Its resolution came with the rise of the modern state, as we now know it. The modern state’s unique ability to resolve the seemingly intractable confusion of authority came via the state “monopolizing the word that commands.” In other words, the state was now the ethical and philosophical source of power, not merely the political center of it. Of course, the state was often in competition with the church in many places, but the foundation for a future philosophically hegemonic state was set once the first modern European states were consolidated. The move to (near) full authority came in the form of representative democracy.

Thinkers such as Montesquieu and Rousseau helped to introduce the idea of society into Western thought. In Manent’s view the modern state appropriated this concept as a way of gaining total allegiance to it and its ends. It commanded loyalty and got a great deal of it. In order to exercise power more fully, however, it needed to be able to provide a compelling and plausible justification of why it represented a legitimate source of authority. It could not merely replace the city and empire physically, but had to replace them and had to compete with the church philosophically and morally, as well. It did so by successfully claiming to be the sole representative of “society”. More specifically, it exalted the general will (in Rousseau’s parlance) of the people and then convinced the people that it was the guarantor (and perhaps even the embodiment) of their collective consciousness. In doing so it effectively eliminated any competing claims to the loyalty of European peoples and persons.

The second important insight the reader finds in the book is a convincing argument for how and why spiritual change has led to political change in the West. It is not uncommon for a political historian or theorist to assert that the political and spiritual dimensions of common life are related in important ways. What Manent’s work adds is an unusually cogent account of how spiritual transformation can lead to political revolution. This is best seen in his account of present day Europe. The European state, he argues, now suffers from a crisis of legitimacy. Europeans no longer have faith that their particular states, or that the state as a form, is a true representative of the common well-being. They have lost their faith in the state, Manent posits, because the state’s unavoidable failure at replacing the church’s spiritual authority and the city’s philosophical authority has slowly come into focus. The state attained power by claiming an authority it could not truly exercise. Now that it has proven itself inadequate to become what it claims to be, it has been exposed as a fraudulent enterprise in the minds of the masses. Manent describes the present age as the likely end of the modern political order. Unfortunately, no institution or form of substance is prepared to fill the vacuum Manent sees the state leaving behind. Thus, Manent avoids the charge of recklessly prognosticating an uncertain political future for Europe, while credibly diagnosing the advanced sickness that he believes will soon end the western democratic nation-state.

The third especially valuable point of emphasis in the work is Manent’s discussion of the incoherence of the simultaneous quests for equality and inequality in contemporary European society. Manent views this phenomenon as representative, rather than a cause, of the decay of the Western state. In examining this issue, however, he bolsters his fundamental argument through a perceptive observation about the West today.

He argues that the chief problem of the Western social order is neither one of too much or too little equality, but rather one that results from the fact that we Westerners all seem to be striving for ever increasing equality, while unrelentingly working to exercise more individualism. Put another way, we might say that Manent is indicting the West for wanting to increase homogenization while demanding ever more atomization. This is untenable and incoherent, but it does not surprise him. The spiritual deterioration of the West that allowed the nation-state to become hegemonic was exacerbated once the modern state finally did succeed in accumulating almost total power, and this in turn further damaged the spiritual state of Europe by removing most every substantive allegiance from citizens that lay outside or above the state. This brings us to the present time where Manent argues that “in Europe today the civic operation is feeble and the religious world almost inaudible.”

Despite the strength and insight of Manent’s analysis, the argument suffers from two chief weaknesses. First, it does not seem to appreciate the potential value in the weakening of the modern state, and, second, it overvalues the role of political thought as a driver of political action. If the modern state is to wither, it is unlikely that Europe will devolve into a formless and near anarchical state. Perhaps this is an opportunity for intermediary institutions that are now limited to gain or regain societal influence in a positive way. Though the second point is a common one in works of political theory, it is also an important one. The world does change because of books that are written by the likes of Hobbes, Locke, and Montesquieu, but it changes because of other factors as well. Manent is a political theorist, and therefore it would be unfair to ask him to write a book that fully addressed the range of politically important issues. However, it does not seem unfair to ask him to discuss, even briefly, the economic, social, and geopolitical factors that have also been at play in Europe’s several transformations.

Even with those criticisms in mind, Manent has presented us with a clear and easily digestible account of the West’s maladies, as he sees them, of the early twenty-first century. We live in a world where unrest is common and where angst is palpable not only in the developing non-western parts of the world, but in the United States and Europe, also. This frustration seems to be deeper than the political or economic causes that are usually attributed to movements such as Occupy Wall Street or the American Tea Party movement. Manent has given us a solid and intriguing point from which to launch the conversation about where we are and where we may be going.

John Kitch received his doctorate in Political Science from Louisiana State University and is a Visiting Assistant Professor at Beloit College.