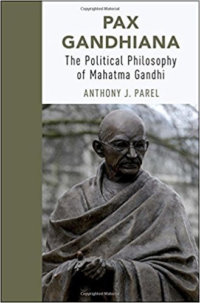 It was not too long ago that scholars debated whether Gandhi could be regarded as a (political) philosopher at all. About 15 years ago, Columbia University professor Akeel Bilgrami published a splendid and widely read article that served to justify viewing Gandhi as a philosopher. Bilgrami suggested that Gandhi’s political strategies were so integrated with abstract epistemological and methodological commitments that his thought took on the quality of bona fide philosophy, albeit not, obviously, academic philosophy.

Bilgrami’s efforts met with seemingly universal approbation. There has been no shortage of torchbearers on the topic, an endless schedule of seminars devoted to reading Gandhi as a philosopher, and numerous research theses and doctoral dissertations composed on Gandhi’s thought within academic philosophy programs both in Indian universities and abroad. But even in spite of all of this, in Anthony J. Parel’s delightful new book, Pax Gandhiana, the author opens with a first line that presents a claim that is absolutely startling to hear, and indeed remains puzzling even as one continues to reflect upon it: “After decades devoted to the study of Mahatma Gandhi’s life and writings, I have come to the conclusion that his most valuable contribution to India and the world is his political philosophy (vi).”

This is startling because of the scope of the statement: Gandhi’s most valuable contribution to India and the world is his political philosophy; it is not, that is to say, his manifold interventions in the politics of empire, which served – among so many other things – to bring about a fundamental and long-standing redrawing of the maps across the entire face of the globe!

The opening lines of the Introduction restate the opening sentence of the book, but also add nuance:

“Although [Gandhi] has made significant contributions to several other fields of human endeavor – religion, nonviolence, satyagraha, and the constructive program, for example – the contributions he made to the field of Indian political philosophy have been the most significant and also the most original (1).”

Taking into account this more tempered rendition, perhaps Parel is speaking only toward the intellectual aspect of Gandhi’s many pursuits, rather than the practical political activities. The organization of Pax Gandhiana lends credence to this view. The book takes shape as eight distinct but interrelated chapters (if you include the Introduction there are nine in total), each treating of a portion of what, overall, could be taken together as a presentation of Gandhi’s political philosophy articulated within the backdrop of his own conceptual framework (chapter 2) and drawn in relief from the thought of his immediate predecessors and contemporaries (chapters 3 & 4). Appended on to the end is a comparison between the thought of Gandhi and Thoreau (chapter 9), which serves also to distinguish Gandhi’s political philosophy from some of his important sources of inspiration. Gandhi’s political philosophy proper, as it were, is addressed primarily in the four chapters 5-8.

There is a specific reason that the hard core of Gandhi’s political philosophy is treated in precisely four chapters. This is because Parel’s Gandhi conceived and ordered his thought in relation to the traditional purusharthas; that is, the Indic notion of the four canonical ends of life. These are dharma (ethics or duty), artha (political economy), kama (pleasure and sensuousness), and moksha (the pursuit of spiritual transcendence). According to Parel, three of these canonical ends of human life lie beyond the sphere of coercion and violence, while one of them (artha, or political economy), has centrally operated precisely as the domain of violence. The crucial innovation of Gandhi’s thought, Parel holds, is to reread, recalibrate, reconceive the domain of artha (polity, economy) to fall in line with and ultimately harmonize with the other three. What such an achievement would lead to, then, is the first time in the conception of the political that violence is banished, or better, gets vanished, from the operation of the state. This is the perpetual peace that lies at the heart of and is the telos of Gandhi’s political philosophy – hence the Pax Gandhiana.

I passed over another point averred in the opening line of the book without comment, but I want to turn back to it now. That is, Parel begins with the words: “After decades devoted to the study of Mahatma Gandhi’s life and writings, I . . .” (vii). It is important to mention both the veracity and significance of this remark. Anthony Parel has long been a pioneering figure in Gandhi scholarship, and is himself largely responsible for the recent resurgence of theoretical interest in Gandhi’s writings, such as that represented by Akeel Bilgrami, with whom this review opened. But there is one other scholar who predates even Parel in this area, and that is Bhikhu Parekh.

Now, Parekh has also written about the use (and abuse) of the purusharthas by Gandhi, but he comes to a markedly different conclusion than Parel. In his 1989 classic, Gandhi’s Political Philosophy, as cited by Parel himself, Parekh writes: “[Gandhi] so redefined the four purusharthas that they collapsed into one. He found little room for kama, equated moksha with dharma, assigned a limited place to artha and only if regulated by dharma, and thus made dharma the sole basis of life (18).” While Parel does not directly or explicitly challenge this position put forward by Parekh, it is clear that Parel’s chapter-by-chapter treatment of Gandhi’s conceptions of artha, dharma, kama, and moksha are designed to systematically supplant Parekh’s earlier interpretation and to furnish a new one in its place.

Does Parel succeed, then, in overcoming Parekh’s dismissive take on Gandhi’s use of the purusharthas and establishing them as the four-fold heart of Gandhi’s political philosophy? I think the methodical treatment that Parel gives each of them in turn throughout the book establishes that he does. And what, then, of the striking opening line – does Parel succeed in proving his bold claim that Gandhi’s political philosophy is his greatest contribution to India and the world? About that one, I must say that I remain puzzled. Perhaps the reader will have to read this rich and provocative new book to decide for herself. It is, anyway, a task that I would unreservedly recommend.