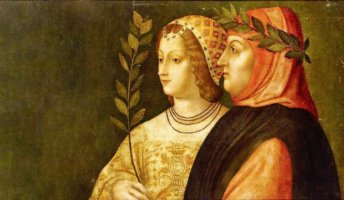 When we think of love sonnets, most of us think of the sappy ooze of lyricists or the sometimes flavorless mush in cheap greeting cards. When they were first written in the fourteenth century, however, their intent was much different.

It all began with Francesco Petrarch in 1304. Like his predecessor Dante, Petrarch was a devout Catholic. He too was exiled from Italy with his family due to civil unrest. Once in France, Petrarch’s father practiced law successfully, and the family prospered, so much so that he arranged the best education money could buy at the time—private tutors. By age sixteen, Petrarch dutifully followed in his father’s footsteps and studied law first at Montpelier then at Bologna.

Legend tells that since his father was supplying rent and allowance to Petrarch, he often made surprise visits at university. One such afternoon, Petrarch was quietly reading a book in his rented room when his father suddenly arrived. Enraged at the number of books Petrarch had purchased with his allowance, he promptly threw them out of the window and into the street below.

Throwing around books, though, was no light matter at this time. Before the printing press, many books were hand-copied and sewn together at great cost. If the story is indeed true, Petrarch likely spent a month’s allowance on one book alone. His personal library held copies of Homer’s Iliad and Odyssey as well as Virgil’s Aeneid, all of which he loved dearly. Meanwhile, his father set fire to the small stash in the middle of the street. Any passerby would know the value of that fire, and disheartened, within a few months Petrarch quit law school and promptly announced he was going to be a writer and poet and take his ecclesiastical orders. Some biographers say that his father died before he could quit; others that he was simply dissatisfied with the untruthfulness of law practice.

Petrarch pursued his minor orders as a cleric and began to write, and this is where the sonnet as a popular form was born. Though he did not invent the sonnet, the personal and spiritual nature of his verse is intensely compelling. The story he tells in Sonnet 3 is that as he was at service on Good Friday in Avignon, a day of “universal woe,” a light from the cathedral window shone on a woman rows in front of him. It was Laura de Sade, who was already wed or soon to be by most accounts. She was illumined, and a Muse was born. They likely never met or spoke from that moment, but Petrarch wrote hundreds of sonnets about her and to her.

Petrarch was not selfishly obsessive, but a man instead who knew love in a different way. That God revealed Laura to him on Good Friday was everything. For him, Petrarch’s unrequited love for Laura was about directing his soul, “From her to you comes loving thought that leads, as long as you pursue, to highest good.”

In his first sonnet, for example, Petrarch speaks of himself, not Laura.

O you who hear within these scattered verses
The sound of sighs with which I fed my heart
In my first errant youthful days when I
In part was not the man I am today.

For all the ways in which I weep and speak
Between vain hopes, between vain suffering,
In anyone who knows love through its trials,
In them, may I find pity and forgiveness.

For now I see, since I’ve become the talk
So long a time of people all around
(it often makes me feel so full of shame),

That from my vanities comes fruit of shame
And my repentance and the clearest knowledge
That worldly joy is a quick passing dream.

Centuries after Petrarch wrote of his love, Shakespeare continues the theme. At the beginning of Shakespeare’s Romeo and Juliet, Romeo is perhaps the most easily recognized exemplar of this thought and behavior, for Rosaline spurns his affections. Romeo’s parents describe him as emotionally distraught, “With tears augmenting the fresh morning’s dew,/ Adding to clouds more clouds with his deep sighs” (1.1.126-127). And when Benvolio confronts Romeo, Romeo defends his oscillating emotions, “Love is a smoke made with the fume of sighs,/Being purg’d, a fire sparkling in lovers’ eyes,/Being vexed, a sea nourish’d with loving tears./What is it else? A madness most discreet,/ A choking gall, and a preserving sweet” (1.1.184-188). The suffering nature of unrequited love breeds these expected paradoxes, but Romeo’s suffering is superficial.

Petrarch may feel torn and appear to be in despair, but he is actually debased, drawn to humility and repentance as he wrestles with his flesh. His spiritual state is clear—he is humbled by how he is drawn to “vanities” or his love for Laura because he knows it is not eternal, but “a quick passing dream.” After several more sonnets describing his reverence and admiration for Laura, Petrarch again returns to his spiritual journey in Sonnet 13:

When Love within her lovely face appears
Now and again among the other ladies,
As much as each is less lovely than she
The more my wish I love within me grows.

I bless the place, the time and hour of the day
That my eyes aimed their sights at such a height,
And say, ‘My soul, you must be very grateful
That you were found worthy of such great honour.

From her to you comes loving thought that leads,
As long as you pursue, to highest good,
Esteeming little what all men desire;
There comes from her all joyous honesty
That leads you by the straight path up to Heaven—
Already I fly upon my hope.

It is God’s Love that shines from within her as Petrarch envisions Laura. With gratitude, he is drawn to a Higher Love. Petrarch seems to know that he must pursue the “highest good” or his love will become common and fleshly, “what all men desire.” Rather than wallow in despair, he is filled with hope that his Muse is leading him heavenward.

By Sonnet 122, seventeen years have passed, and Petrarch declares that “the human passions are no less intense—the bitter shadow of our heavy veil…. Ah grief! How long before I see the day when…. I step out of my grievous trial by fire?” Petrarch implies that his suffering, his grief, is God-sent. He wrestles with the same paradoxes Shakespeare describes centuries later. Love is a “living death” or “pleasurable harm” that “shiver[s] in midsummer, burn[s] in winter.”

Petrarch’s journey then may reveal the simplest truths—that love brings joy and sorrow, that time may not heal, but most importantly, that our faith in God can remain steadfast as our eyes look not to ourselves or to others, but heavenward.

All quotations from Petrarch are from Selections from the Canzoniere trans. Mark Musa (New York: Oxford University Press, 1985).

This was originally published with the same title in The Imaginative Conservative on November 10, 2017.