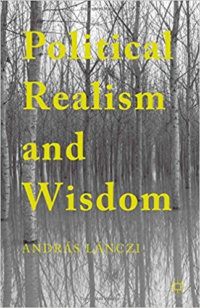 András Lánczi’s latest English publication, Political Realism and Wisdom, consists of seven chapters, bookended by a short preface and conclusion, all loosely bound by the large-order themes of the work’s title. The manner in which the two threads are separated and collected—the dialectic, as it were, between them—is one of the interesting, albeit unresolved, problems running throughout the work.  Lánczi’s catholic and essayist’s style offers a catalogue of insights, demonstrating his erudition, but readers will come away with few palpable conclusions along with some likely perplexity.  Some lack of clarity results from the paucity of thorough and proper editing.  With nary a page free of grammatical, syntactical, and other errors, confusion is unavoidable, not least in instances where negative particles are missing, designating the opposite of what was presumably meant.

At any rate, inspiration for the book emerges from the author’s “serious doubts and reservations” regarding liberal claims “that individual human rights and democracy are the ultimate absolutes that ground political action as norms.”  So much strikes Lánczi as “utopian” (viii; cf. 85, 118).  Furthermore, for Lánczi, the overwhelming focus of contemporary political science on “normativity,” on institutionalism, and ultimately the endeavor to be scientific, obfuscates the study of what Lánczi holds to be most fundamental about politics—to wit, power.  (As a curious aside, while “acquisition of power” appears in the index, “power” per simpliciter does not).  Uncovering the reality of power is Lánczi’s stated objective, or more boldly yet: “To save civilization is the main purpose of political realism” (58).

The first (and longest) chapter, “What Is Political Realism?” provides a circumnavigating discourse on the titular subject—not quite a genealogy, nor a systematic account—suggesting that if politics “is about power, and power is about action…the focus of political realism . . . is political action” (3).  Readers are informed that Machiavelli is “probably the first ‘political realist’ thinker.”  Why it is only probable is not exactly clear.  Whatever the case, Lánczi’s praise for Machiavelli is abundant. While he “was not a philosopher,” Machiavelli “was and remains the only [thinker] who could combine the aspects of political success, political morality, and political wisdom”—three fundamental characteristics of political realism according to Lánczi.  By contrast, Lánczi states, at least one of the three components “is missing from all other political thinkers” (12, 3, emphasis added).

While Lánczi claims the variety of political realism he sketches is to be distinguished from Realpolitik, or realism as typically applied in international relations, the distinction sometimes collapses, as for example in concluding statements such as the following:

“Realism dictates that the immediate has preference over the remote; that in politics it is either you who makes decisions and use other people [sic], or it is you who are used by others; that most political agents act out of necessities and revenge rather than of ideological commitments [sic]; that ideas do matter but only in the long run, a particular case is determined by sheer will [sic].  Political realism simply wishes to convey that security comes first, and justice comes next” (68, emphasis added).

“Ethics and politics,” Lánczi underlines, “are two distinct forms of man’s encounter with reality,” and “anyone who confuses the ethical and political will end up with either a moralistic or a downright tyrannical view on power” (60).  Thus, political realism strives to “rationalize politics through understanding of power [sic] by subordinating all facets of it to this only aspect: politics is about power.”  That distinctions can be made or that there are categories of human experience is one thing, but that power is the singular concept exhausting all things political is questionable, certainly in light of the possibility of wisdom.  One cannot help but wonder whether such reductionism is either realistic or wise.

Part of what Lánczi admires about Machiavelli rests in his philosophical anthropology, exemplified by the “fundamental insight . . . that man always behaves differently as it is prescribed either by laws or moral precepts or rules, or simply private considerations.  Man is a deficient being in the universe and especially in political matters” (62). But Lánczi’s Machiavelli-inspired (if not outright Machiavellianism) is difficult to square with his overall critique of so many modern trends and tendencies—notwithstanding his statements in passing that in a certain sense, Machiavelli is “not modern at all” (46), a claim requiring further elaboration to be convincing.

What is more, in taking its point of departure from a non-philosopher who is well known for his critique of classical philosophy, it is not entirely clear how Lánczi’s political realism can be reconciled with his Strauss-inspired desire to revive classical political philosophy (176ff).  If “the most obvious sign of European crisis” is a loss of concern with philosophy, or “a neglect of philosophy,” a Machiavellian-Lánczian realism does not seem to offer the requisite remedy (136).  If instead a Straussian-Lánczian approach to wisdom seems more up to the task, once more, it is not self-evident how wisdom and realism are reconciled, unless one repeatedly qualifies or redraws the lines designating one of the two terms, as it were.

Leo Strauss, Lánczi writes, “was a political realist without wishing to be one, or he was [sic], it was simply a strong commitment to searching truth [sic].”  The qualifications for political realism hereby broaden—the erstwhile categorization falls away—to the extent of overlapping with the very definition of philosophy itself.  Curiously, so much would exclude Machiavelli on Lánczi’s own account, to say nothing of Machiavelli’s adamant pursuit of the “effectual truth,” rather than a love of wisdom that asks, as Lánczi rightly states, the “characteristic question” about phenomena, namely “what is?”  Lánczi’s work certainly raises more questions than it answers, and as he notes, one of “the most burning issues” of his work is “the question whether political philosophy is not by its very nature anti-realist, because it does not directly addresses [sic] the problems of political action” (18).

It might be said that Lánczi’s endeavor is complicated by the fact that, on the one hand, his criticism of philosophy comes in the form of a philosophical critique, while, on the other hand, he states that his realism establishes how to engage the “actual issues in politics” (35). However, his own philosophical discourse only superficaially attends to those political issues. Consequently, one is tempted to conclude that at least in the work at hand, Lánczi speaks about realism without ever adopting it and he mistrusts philosophy while otherwise practicing it.

Whatever the inconsistencies in this regard, the work’s greater coherence emerges in Lánczi’s polemic.  After all, Lánczi is explicit: “In most cases we are born to have an enemy” and, “The enemy is an important justification why we are doing what we do” (12-13).  Varieties of utopian thinkers are the object of Lánczi’s ire, and one of the fundamental concepts on which modern utopianism feeds is that of “progress.”  Contemporary progressives, liberals, democrats, and the like, whom Lánczi lumps together, fail to grasp the ineluctable facts surrounding strife and necessity, change and acquisition, the enemy and revenge, and not least of all war, presuming that all such things are relics of the past (67, cf. 4-18).  Normative political science, democratic theory, and liberalism following upon the likes of John Rawls, Lánczi argues, all disregard the fundamental “context of human possibilities”—they fail to address time and place, and historical references—and thereby fall into “the trap of modern utopianism” (43-4).

This “trap” follows from the major flaw of trying to collapse the tension between “what there is” and “what there should be.” This trap is a tension that has otherwise kept “human consciousness in a condition of eternal excitement” (47), but is now proclaimed to be closing in favour of progressive development towards protecting the individual human rights of all the world’s peoples—so much is what Lánczi refers to as the “new form of fundamentalism” (71).  A concomitant piece of evidence Lánczi offers for the victory of “what there should be” over “what there is,” is the growing presence of virtual reality, as the concluding chapter’s title suggests: “When Facebook Is Your Only Friend” (183-87), which appears disproportionate given the gravity of Lánczi’s enmity.

To the extent that Lánczi’s critique has some merit, his conclusions are astonishing at times.  Being immoderately critical of constitutionalism (cf. 139, et passim) due to its association with “institutionalism,” he consequently turns to the need for strong leadership.  In fact, Lánczi refers to “leadership and power” as “the core of political realism,” and is explicit in suggesting, “force is legitimate the moment you can produce a mass support behind your idea or will” (67).

Modern life is about mutual understanding, tolerance, and peace.  At least in words and by norms [sic].  But in reality it has produced the same events and phenomena like another ages in which there were not so many words about peace or other wishes.  We have had wars, and earlier never seen the number of civil casualties in wars.  We need leadership independent of the form of the government.  This is the final word of political realism on politics (61, emphasis added).

Read in a certain light, Political Realism and Wisdom may be taken as a manifesto by a Machiavellian-like advisor to a prince.  Is it any wonder that the current President of Hungary, Viktor Orbán, apparently consults regularly with Professor András Lánczi?  One is tempted to consult and reflect anew on Book V of Aristotle’s Politics upon reading Lánczi’s work.

Trevor Shelley teaches at St. Mary's University in Calgary and is the author of Globalism and Liberalism: An Essay on Montesquieu, Tocqueville, and Manent (St. Augustine's, 2017).