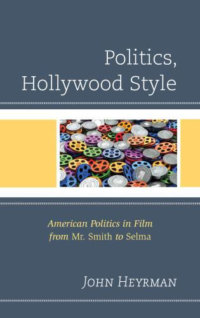 John Heyrman’s Politics, Hollywood Style: American Politics in Film from Mr. Smith to Selma is a brilliant review of films dealing with American politics since the Great Depression.  Since one can argue that almost every film ever made includes elements of power or politics defined broadly, Heyrman begins his volume by explaining exactly which types of films are under review in his book: those made in the U.S., “major” motion pictures, and those who have plots centered around political figures or events.  His focus in the book is on how politics is portrayed to the viewers, and whether the current political climate at the time aligns with the topics of the movies released.

His chapters are organized around certain political events and time periods, and includes 83 political films:

Some of the notable films here include Mr. Smith Goes to Washington, The Great McGinty, and Abraham Lincoln.

Notable films of this time period include Born Yesterday, All the King’s Men, and The Senator was Indiscreet.

Films such as The Last Hurrah, The Manchurian Candidate, and Seven Days in May are included during this time period.

The Candidate, Dr. Strangelove: or How I Learned to Stop Worrying and Love the Bomb, and All the President’s Men are some of the films included in this chapter.

Protocol, Roger and Me, and First Family are included in this chapter.

Over 20 films are evaluated in this chapter, as we see a rebirth of political films.  Some of the noteworthy inclusions are Wag the Dog, Dick, The American President, and Air Force One.

This chapter includes the most political films (24) such as Lincoln, Fahrenheit 9/11, Charlie Wilson’s War, and Citizenfour.

His last chapter summarizes the main findings and trends present across these time periods.

Heyrman engages in a broad content analysis of these films, classifying them in categories regarding the elements of politics within each.  The categories he uses are idealistic/cynical (I/C), completely cynical, paranoid, and heroic.   The idealistic/cynical films are those that have a more cynical outlook on the political process or the people who occupy political positions, but there is one or more “good guys” who try to either redeem themselves or the political process. These movies have happy and uplifting endings.

Completely cynical films, on the other hand, do not have any uplifting endings.  Politics is viewed as a very corrupt system.  As Heyrman discusses, “in contrast to idealism in political films, cynicism would be most likely to discourage political engagement by the viewer” (xix). Paranoid films include those that have extreme levels of distrust in and fear of the political system.   One of the most notable paranoid films discussed in the book is All the President’s Men.

Finally, heroic films are those where the main characters aren’t fighting against any corrupt political system or redeeming themselves, but they are trying to fight some sort of problem in society that is epidemic.  Biographical films are also included here.

Heyrman also explores the ideological tendencies of the films (whether they lean more conservative or liberal), as well as the racial and gender representation present, both in the plot and main characters.

What Heyrman’s analysis shows is that during most of these time periods, the idealistic/cynical films are the most common.  We also do not see any paranoid films arriving on the scene until the 1970s, around the time of the Vietnam War and Watergate.   He also finds the ideology present in these films is significantly or mildly liberal. Only one clearly conservative film turns up, which isn’t until 2012.  Both women and racial minorities were largely absent in political films until the last few decades.

Instead of walking away after reading with the impression that Hollywood has consistently portrayed politics as “evil,” Heyrman’s analysis left me believing that a good way to examine our political history is through American films.  These major motion pictures line up very well with the political and historical context at the time of their production.

I would highly recommend this book to professors teaching about politics in film, as it covers both very popular and less well-known American political films.  Students and scholars alike will find the content analysis of these films to be engaging and thought-provoking.  This book is an excellent read.

Heather K. Evans is an Associate Professor in Political Science at Sam Houston State University in Texas. She is author of "Competitive Elections and Democracy in America: The Good, the Bad, and the Ugly" (Routledge, 2014) and editor of "Community Engagement Findings Across the Disciplines" (Rowman & Littlefield, 2017) and "Community Engagement Best Practices Across the Disciplines" (Rowman & Littlefield, 2018).

What Is Enlightenment? Continuity or Rupture in the Wake of the Arab Uprisings

Thomas Varacalli’s Review of My book “Towards a Science of States: their Evolution and Properties”

Faces of Moderation: The Art of Balance in the Age of Extremes