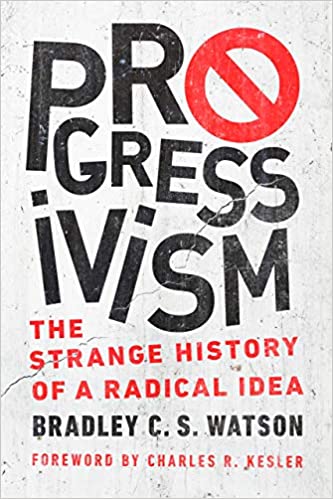 Bradley Watson, professor of political theory at St. Vincent College, has written a very valuable and provocative work on Progressivism; but it is not exactly the book I expected when I picked it up to read.  I should have paid more attention to the precise wording of the title, which accurately describes the author’s intention.

Rather than presenting an analysis of the Progressive movement itself, which according to most accounts lasted from about 1890 to the 1920’s and was led by such famous figures as Theodore Roosevelt and Woodrow Wilson in politics, by John Dewey, W. E. B. Dubois, William Graham Sumner, and Herbert Croly in intellectual circles, and by Oliver Wendell Holmes and Louis Brandeis in jurisprudence, Watson focuses on how Progressivism was interpreted by later generations of historians, writing from the 1940’s to the 1980’s to the present day.  In other words, the book is about how historians shape our understanding of history; it focuses on the way that scholars portray the past rather than the events and figures of history themselves.  This approach can be disconcerting at first for the reader.  Would it not be more interesting to learn about Teddy Roosevelt and the Progressive Party during the dramatic election of 1912, rather than to read summaries of historians who analyzed the actors fifty or sixty years later?  Admittedly, many of the historians discussed by Watson are influential public intellectuals – scholars such as Richard Hofstadter, Arthur Schlesinger, Sr. and Jr., Henry Steele Commanger, Daniel Boorstin, William Appleman Williams, and Gabriel Kolko; but other historians whose works are summarized here are rather obscure.  Do we really need to know what Daniel Aaron, David Noble, Arthur Mann, Henry F. May, or Robert Wiebe thought about the Progressive era, especially when we learn that most were singing the same tune?  The multiple accounts of major and minor historians in chapter three (covering old liberals like Hofstadter and Schlesinger) and in chapter four (surveying New Left historians like Williams and Kolko) begin to blur into each after a while. The drama picks up in chapter five when we learn about the counterattack from the conservative counter-revisionists of the Claremont School in the 1980’s.  But a superficial reader might think this book is mostly ‘inside baseball’ for the historians’ guild.

After reading Watson’s systematic analysis of these historians, however, a powerful message emerges. It is highlighted in the introduction by Charles Kesler and runs throughout the book and is reaffirmed in a strong conclusion that is almost a warning.  Watson’s thesis is that Progressivism was a “fundamental rupture with the roots of the American political order” that aimed at overturning America’s founding principles; but its radical character was downplayed or perhaps deliberately hidden by later historians with sympathetic views in order to make it seem “as American as apple pie” (216-219).  In doing so, the historians were legitimizing the rejection of the American founding by Progressives; and their hind-sight writings were a kind of intellectual conspiracy that sought to transform the American polity without actually arguing the case openly.  They presented the Progressive ideal of a “New Republic,” which featured a centralized administrative state led by a strong national executive and run by experts who would regulate business corporations and protect workers’ rights, as if it were the inevitable and necessary successor to the American founder’s vision, which featured a decentralized federal Republic limited by a fixed constitutional structure and grounded on the God-given natural rights of the Declaration of Independence.  In Watson’s words: “Almost no one saw progressivism as being a fundamental rejection of the founders’ Constitution and as embodying a new form of secular millenarianism with enduring regime-level implications” (170). Watson’s critical review of the historians’ guild is intended to show how its practitioners repeatedly omitted the essential tension between Progressivism and the Founders’ constitutionalism.  The historians of the progressive era thereby aimed at accomplishing a silent coup d’état against the American founders, and they largely succeeded until they were challenged by the Claremont School of political theorists in the last thirty years.

This is quite a provocative thesis, of course.  In making his case, Watson builds upon the work of counter-revisionists Ronald J. Pestritto (Woodrow Wilson and the Roots of Modern Liberalism (2005)) and Paul D. Mareno (The American State from the Civil War to the New Deal: The Twilight of Constitutionalism and the Triumph of Progressivism (2013)), as well his own previous writings, in order to expose the earlier historians’ conspiracy and to refute their claims.  In my judgement, he makes a compelling case in most respects, while oversimplifying some interpretations and possibly missing the practical appeal of progressive policies as a response to genuine problems created by the new industrial age and its powerful “robber barons.”  Let me elaborate a few of these points in assessing his work.

In the first place, Watson ably employs the overarching paradigm for interpreting American politics developed by the Claremont School; it applies Leo Strauss’s famous distinction between “natural right” and “history” to the American political regime.  Seen through this lens, the American founders built the U. S. Constitution on permanent truths about natural rights and the fallen nature of man.  By contrast, the Progressives were “historicists” of different kinds, who rejected permanent and universal truths in favor of historical evolution, endless change, and anti-metaphysical pragmatism.  Watson shows that Progressivism was an historicist ideology derived from Darwinian evolution (both scientific and social Darwinism), the pragmatism of John Dewey and Williams James, and, interestingly, the Social Gospel teachings of Walter Rauschenbusch.  Rauschenbusch was crucial in changing Christianity by equating the coming of the Kingdom of God on earth with socialist transformation (46-58). Watson might have strengthened his case by quoting the shocking line from A Theology of the Social Gospel (1917) where Rauschenbusch asserts “God must join the social movement.”  Watson also cites Woodrow Wilson’s famous comparison of the Founder’s view of the Constitution as “Newtonian,” based on a fixed view of human nature, and Wilson’s own view as “Darwinian,” meaning an evolving set of norms that change with the times in order to overcome the “straightjacket” of the original Constitution and to allow for charismatic national executive leadership outside the Constitution (172).  Watson is on solid grounds on all these points.

Watson is less convincing, however, in discussing Father John Ryan, the Catholic priest who defended the policy of a “just wage” or “living wage” for workers as well as social security and labor unions (58-68).  Father Ryan was indeed a progressive reformer, but his views were not based on historicism or millennialist dreams, as Watson himself admits; they were based on Catholic natural law and a natural right to property largely in accordance with Pope Leo XIII’s Rerum Novarum.  And Ryan always insisted that the salvation of the souls was the ultimate aim of the Church, not building an earthly kingdom of God.  In other words, Ryan promoted progressive policies, but he was not a progressive historicist like Rauschenbusch or Wilson; and Ryan was “not hostile to republican government,” even if his views were “in tension with it” (68).  Likewise, it is difficult to tell from Watson’s analysis of Jean Yarbrough’s biography of Teddy Roosevelt if the old Bull Moose statesman was a progressive historicist in theory, simply because he was influenced by Herbert Croly, social Darwinism, and “smatterings of Hegelianism” (198-199).  TR’s “New Nationalism” advocated national policies that were more radically progressive than Woodrow Wilson’s “New Freedom” and Wilson’s segregationist policies.  But it is possible that Roosevelt’s justifications were less theoretical and less radical than Wilson’s philosophical hostility to the American founders’ natural law constitutionalism.  These issues raise the question of whether it is possible to have a strong national government, as the earlier Hamiltonian Federalists and Henry Clay Whigs advocated, that could address the genuine problems of modern industrial society, or, today’s problems arising from the corporate giants of the digital age and the economic crises caused by the current pandemic, without subverting the Founders’ ideal of a limited constitutional order based on permanent truths about natural law and human nature?

These questions flow logically from Watson’s rich and stimulating book, although they cannot be adequately addressed in this brief summary and review.  At a minimum, his book leaves the reader with a deep suspicion of several generations of progressive historians who wrote without being fully honest or fully aware of the tensions between progressivism and the American founders.  Beyond that, his book requires us to think about the challenges of progressive thought to the legitimacy of American institutions and to the American regime as a whole. By provoking these questions, Watson leads us to the deepest level of American politics which is nothing other than a continuous dialogue and critical engagement with the American Founders.

Robert Kraynak is Professor of Political Science and Director of the Center for the Study of Freedom and Western Civilization at Colgate University in New York. He is author of History and Modernity in the Thought of Thomas Hobbes (Cornell, 1990), Christian Faith and Modern Democracy (Notre Dame, 2001), and In Defense of Human Dignity (Notre Dame, 2003).