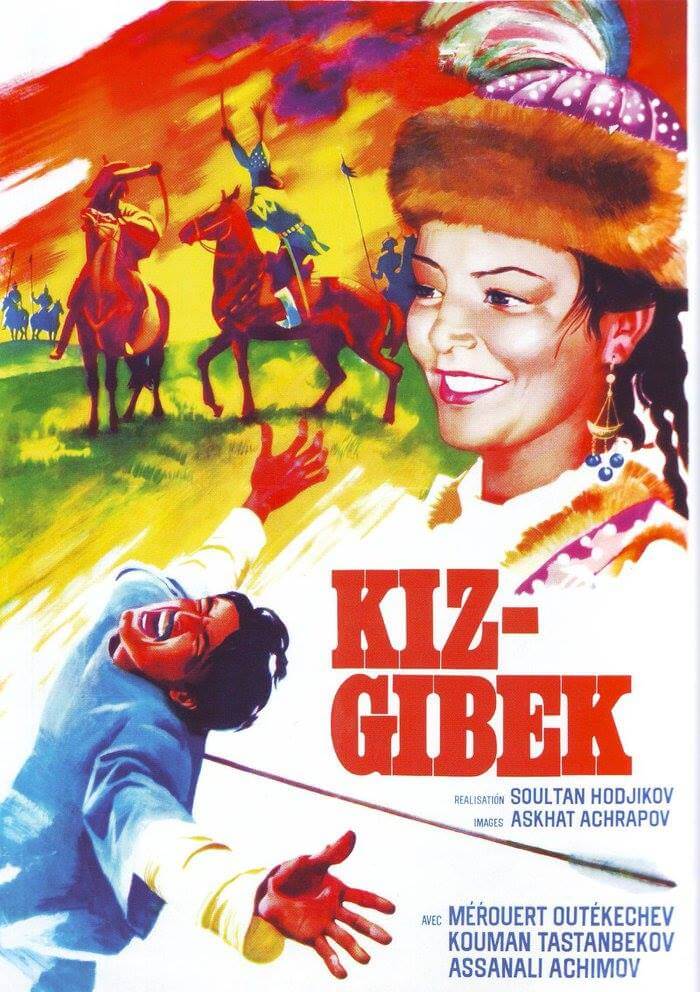 The Kazakh film I’m reviewing today is the 1970 Kazakhfilm production Qyz-Jibek directed by Sultanahmet Qojyqov, the retelling of the epic tragic romance of the same name which had earlier been rendered into a production for the Soviet theatre. This film is glacially slow-paced, with barely enough of its Romeo-and-Juliet story to justify padding out its 142-minute runtime, and features a heavily-stylised formal cinematic language and theatrically-inspired acting direction that recalls the preferences of Eisenstein. As such it is certainly not be to everyone’s tastes. I won’t lie, it took me a long time to get all the way through it. But it is a stunningly beautiful film, which took full advantage of all of the technical versatility of its filmic medium. It lavishes gleeful attention on the natural beauties of the Kazakh landscape with its sapphirine lakes, dry rugged mountains and deserts and vast high grasslands. There are also a number of technically-impressive wildlife shots of swans and owls. The film also builds dramatic tension with close-up shots of the main actors. Careful craft clearly goes into practically every take. It’s a film which is difficult to like, but which one cannot help but appreciate just because it’s so pretty.

The story involves the ill-fated romance and courtship of the titular Jibek (Merýert Ótekesheva) with the warrior Tólegen (Quman Tastambekov), and Tólegen’s death at the hands of the cruel and treacherous brigand Bekejan (Asanáli Áshimov). There is a tone of high tragœdy about the original story, since the political forces that surround the two lovers through their families doom their marriage to a bitter end. The internecine conflicts for political power between Tólegen’s father Bazarbaı (Káýken Kenjetaev) and the clan of Bekejan, with Jibek’s father Syrlybaı Han (Kenenbaı Qojabekov) caught in between, offer some ideological overtones that resonated with a mediæval Kazakh audience.

There is a great deal of creative use of colour in the film, particularly red, white and black. The colour scheme actually mirrors that of Beloe solntse pustyni in some ways: a film which came out the same year. The duels and cavalry battles are intricately choreographed and spectacularly shot with a mixture of wide-angle ærial and mobile shots. The violence is highly stylised in a way that appears to præfigure Sergei Bodrov’s steppe dramas Kóshpendiler and Mongol. Attention is lavished in close-up on blood spatters across the sand, and these are often mirrored by flowering red blossoms in the field. Atmosphere is also used to great effect, with clouds and sunsets providing some of the needed lighting effects for the duels and battles between Tólegen and Bekejan.

The costumes and the set-pieces are equally lush; there is a great deal of effort put into giving the appropriate texture to seventeenth-century nomadic Kazakhstan. Each shot is meticulously framed, as though the director wanted to get the perfect angle to deliver the correct emotional impact – though my one complaint is that the editors were far too overly fond of wipes, and sometimes used them inappropriately. The scene in the yurt between Tólegen and Jibek on their wedding-night is admirably restrained: the eroticism is actually heightened and sublimated by the fact that it is expressed symbolically and refrains from ever ‘showing too much’. Despite this restraint, one can certainly see echoes of this scene in the (much more explicit) parallel sequences in Ermek Tursynov’s Kelin.

One can’t quite shake the feeling, as one is watching it, that one is watching the local equivalent of an Arthurian romance or a cinematic interpretation of some other folk tale. Despite the very disparate intended audiences, I was reminded more than once of the Errol Flynn and Olivia de Havilland version of The Adventures of Robin Hood: Quman Tastambekov does have a certain expression, bearing and mode of delivery that strongly recalls Errol Flynn at times. Certainly Tólegen is portrayed with a measure of Robin Hood’s humour, cunning and general nobility of spirit. On the other hand, the romanticised and æstheticised violence – along with the thematic concerns with a political anarchy that is only barely and imperfectly constrained by a veneer of traditional steppe courtesy – carries with it certain echoes of Sam Peckinpah’s The Wild Bunch. The film ends abruptly and discordantly, showing us one fragment of the death of Jibek after she learns of her husband’s fate.

These purely-stylistic comparisons don’t quite do the film justice, though, unless we take the parallel a little deeper. This film is iconic in a way that Robin Hood would be to the British or that the entire Western genre would be to us Americans. It has a mythopœic depth. That is to a significant extent because this film stands solidly at or near the fountainhead of the dastanic epic style in Kazakhstani cinema: with its high romance; its ideological focus on the struggle, here unrealised, for the unification of the tribes; its valorisation of an epic hero (or two in this case, Tólegen and Jibek) imbued with the martial and hospitable excellences of the steppe. It portrays an important national legend – not quite on the same level as Alpamıs, yet not very far off from it either.

The distinctions between Tólegen and Bekejan are highlighted here for the typically dastanic ideological purpose of highlighting the virtues of the Kazakh people. Tólegen is an obedient son – in most things. His choice of bride is not particularly welcomed by his father. And yet he loves his father dearly and rides to his rescue in battle. Tólegen is also shown to be brave, resourceful, respectful of the steppe traditions of fair play and hospitality – yet not without a certain degree of cunning. Bekejan, on the other hand, is portrayed as suitably masculine to work as a foil for Tólegen, but without respect for the steppe traditions. Though he is a formidable warrior, he is lascivious, disrespectful – and ultimately treacherous and ungrateful for Tólegen’s assistance in battle.

The version I watched was officially dubbed-over in Russian, with some of the original dialogue and particularly the singing being audible. The soundtrack features a great deal of Kazakh folk song and traditional dombyra airs: rendered in Russian to be intelligible to a broader Soviet audience, but still retaining their original flavour and melody. The singing and dombyra were provided by the characters

And so, when all of these elements are put together, there is an extent to which it is meant to feel as though we are watching not so much a film as a moving painting, an objet d’art meant to capture as much of the traditional Kazakh spirit as possible: whether in the costumes or the music or the landscapes or the cavalry battles. There is not as much of a sense of ethnographical voyeurism here as there is in, say, Amangeldy – because this is a film which has Kazakhs telling a uniquely-Kazakh story about themselves. The story itself, however, is one which has both a specific local political meaning and a universal appeal: the star-crossed lovers caught in the middle of a tribal feud.

Once again, though: although it is exquisite as an artistic accomplishment, and although it is an important landmark in the development of Kazakhstani film, this movie has a tendency to try the patience of the casual watcher. The martial set pieces are engaging and exciting enough, and the eye is naturally drawn to appreciate the framing and movement and technical mastery of the medium, but you have to navigate between them through turgid expository dialogue and establishing action whose delivery is theatrical to the point of being maudlin. I do recommend it for its sheer stunning beauty, but it is not the sort of film that I would go out of my way to rewatch for enjoyment.