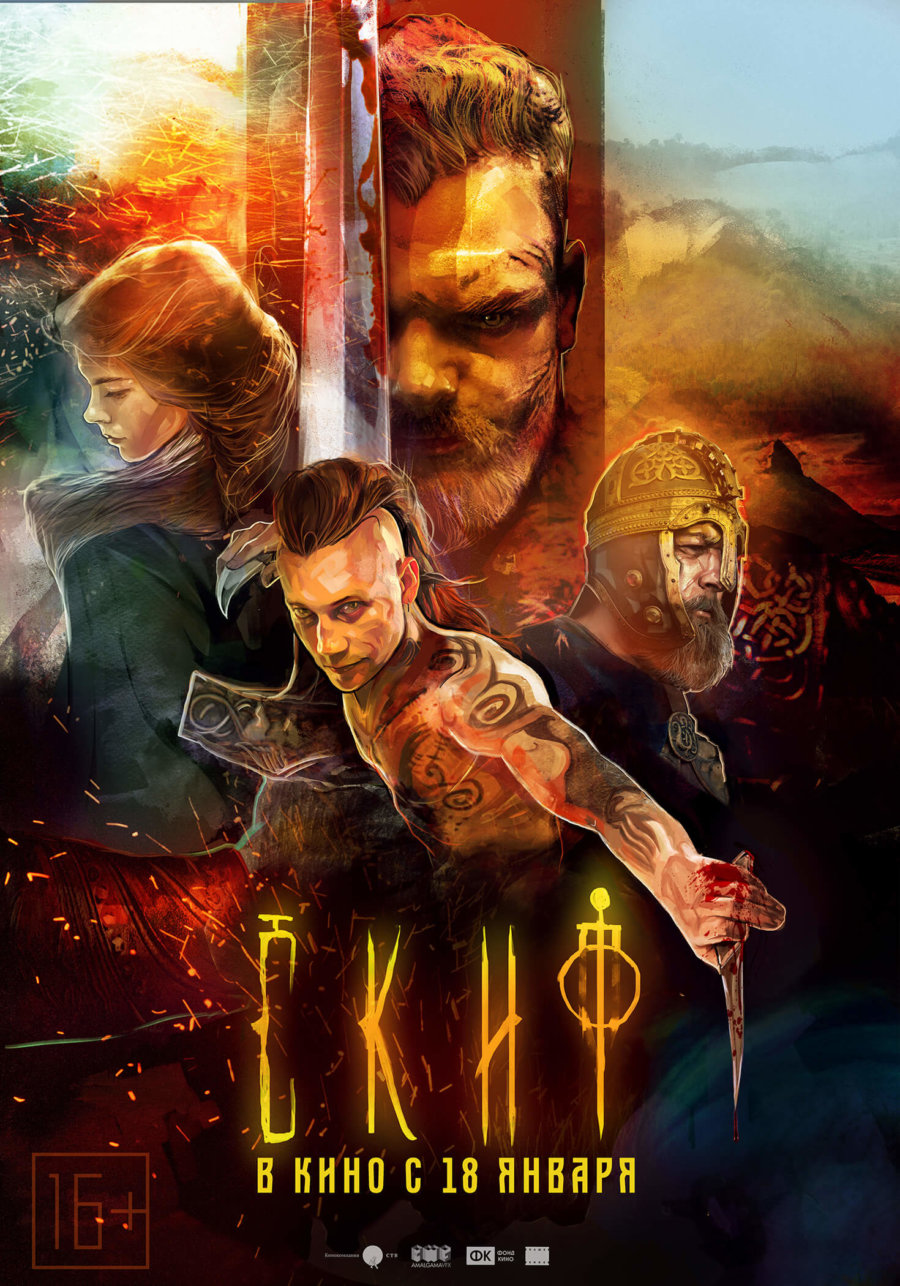 Rustam Mosafir – the director of 2015’s Begletsy – returned in 2018 with the big-budget action movie Skif (literally, The Scythian, but released in English under the title of The Last Warrior). This is a film that places itself readily in the sweet-spot ambit of reviewers like RedLetterMedia. It readily approaches the Tarantino threshold for æstheticisation of violence to the point where it becomes campy – but it skirts the line with enough adroit self-awareness that it never quite crosses it. Ostensibly set in the vicinity of Krasnodar during the Kievan Rus’ period (and shot on location in Crimea), though in such a way that it skirts the blurry line between historical fiction and sword-and-sorcery low fantasy, it is a grim, brutal, cynical depiction of the age that nonetheless carries itself with a suitably compelling degree of swagger.

As my brief description may suggest, Mosafir’s most recent film is in many ways an entirely deliberate throwback to Hollywood thrillers and action movies of the eighties and nineties: the Mad Max trilogy, the Lethal Weapon films, Conan the Barbarian, Rob Roy and the Death Wish movies, to name a few. (Mosafir directly credits as his inspirations in this film Mel Gibson, George Miller, Robert Howard and Charles Bronson.) As such there are strong thematic preoccupations with honour, power and its dangers, trust and betrayal, fate and destiny. The characters inhabit a universe of blood oaths and kingly intrigues, of human sacrifice and inhuman rage, where tribal clashes between East and West end messily and with gruesome results. There are also some bitterly cynical intimations, particularly toward the end of the film, about the very nature of political power.

The last band of Scythians – a warlike nomadic people who have all but faded entirely from history – make their living as hired killers for lords and khans who can pay their price in gold. They call themselves the ‘Wolves of Ares’, and they are led by a red-bearded man named Yar (Vitalii Kravchenko) and by a spiritual elder named Anagast (Viktor Solov’ev). The Wolves of Ares kidnap the wife, Tatyana (Vasilisa Izmailova) and newborn son of a loyal Rus’ warrior named Lyutobor (Aleksei Faddeev), with a ransom demand knifed to the door-jamb of his house. The demand is that Lyutobor poison his liege, the knyaz Oleg of T’mutarakan (Yurii Tsurilo). Lyutobor dutifully reports this to his lord, and Oleg subsequently frames Lyutobor for poisoning him – the idea being that he would use the opportunity to get his wife and son back, and also find out who in the T’mutarakan court tried to suborn Lyutobor to assassinate Oleg. Lyutobor’s only hope to find his family rests in a Scythian captive that his people took when they raided his home: a young fighter named Kunitsa (Aleksandr Kuznetsov) who hopes to challenge Yar for control of the Wolves when he grows strong enough.

The film’s primary relationship – the one that sets forth the thematic problems of trust, honour, betrayal and vengeance – is the tense relationship between Lyutobor and Kunitsa. At first, neither of them likes or trusts the other in the slightest. As far as Lyutobor is concerned, Kunitsa is just an animal. On the other hand, Kunitsa thinks Lyutobor’s Christianity makes him weak and that his scruples make him naïve. However, despite in the beginning Lyutobor forcing Kunitsa to swear an oath to Ares on his blood-stained sword, Kunitsa proves over and over again that he is willing to honour his word – and so he gains Lyutobor’s grudging respect. On the other hand, Kunitsa comes to admire Lyutobor for his tenacity as well as for his prowess in battle. It wouldn’t be quite right to call this a ‘buddy’ film, despite the subtle hat-tips to Lethal Weapon in this relationship. Lyutobor and Kunitsa gain respect for each other through a number of encounters and survival scenarios, and the natural flow of these events effectively builds audience sympathy and investment in that friendship. But at the same time, the two of them stand on either side of a religious and cultural divide that, even toward the end of the film, is never quite bridged. The film seems to intimate that the only force that can bridge it is bloodshed, even political mass murder.

In fact, what the film has to say about honour and trust is that both of these things are fragile, and built on a landscape of power-struggle and intrigue that can roll over and crush them at any time. With the notable exceptions of Kunitsa and Anagast – both of them Scythians! – and Lyutobor’s loyal wife Tatyana, all of the major characters go back on their word or violate a relationship of trust in some way, and they do it for gain, in power or in wealth. At the beginning of the film, a Qypchaq warrior named Qumai (played by Rustam Mosafir himself) challenges Lyutobor to a wrestling-match, but when Lyutobor beats him fair and square, the humiliated and enraged Qumai draws a knife and tries to stab Lyutobor in the back. This sets the tone for a number of encounters and relationships in the film. Although kinship, friendship and religious obligation are expressed by most of the characters in Skif, the only ones ever shown to 100% hold up their end of a bargain are Scythian. And in the end they suffer a dreadful, tragic price for this honesty.

Scythian lore exercises a powerful grip on the Russian imagination. The obvious point of reference is the Aleksandr Blok poem Skify, which ties the character of the Russian nation to the ancient Asiatic steppe nomads. But it goes back further than that. As religious philosopher Nikolai Berdyaev highlights, the great Slavophil cultural critic Aleksei Khomyakov in Semiramis spoke of the civilisational principle of iranstvo: the principle of fire and sunlight and the sacredness of the spoken word, which is opposed to the animistic principle of kushitstvo with its emphasis on power, monuments and necessity. In Khomyakov’s ethnographic imagination, the Scythians embodied the ‘Iranian’ principles of sacred truth, hatred of the lie, and the idea that true freedom consists in keeping one’s word – and then passed on these traits to the Russians. This same imagination seems to fuel Mosafir’s low-fantasy vision of whom the Scythians were and what they believed, though if Oleg is any indication, he expresses a strong doubt that the Russians inherited it except indirectly.

The logic of Skif appears, at first, to be ‘Cushitic’. The gods that go unseen are false. Power is invested – even by supposedly ‘Christian’ characters like Oleg – in magic totems of wood and stone, which must be sated by blood. Necessity overrules any conception of the sacredness of one’s word. Sons betray fathers; fathers kill sons. Lords and servants cheat each other. Men betray other men to their deaths for purses full of gold. Alliances are broken; tribes are massacred. The world we get to view through the eyes of Lyutobor is bleak and brutal. But it seems like Mosafir is in ultimate agreement with Berdyaev and Khomyakov, given that the few fleeting glimpses we get of any sort of spiritual freedom – including a particularly poignant and bittersweet one at the very end of the film – come through the perspective of the Scythians themselves.

This political angle on the amoral nature of acquiring and keeping political power, and the options available for a person of integrity under it, prompts a contrast with another genre film, but not a Hollywood one. Despite several echoing similarities in theme and in plot beats between Skif and Zhang Yimou’s Hero – with Jet Li’s Wuming sharing certain qualities and temperament with both Lyutobor and Kunitsa and with Yurii Tsurilo’s Oleg displaying a similar outlook to Chen Daoming’s Qin Shihuang – the final tragic choice of Wuming to uphold the state order without regard for his own life at the end of Hero, stands in stark contrast to Lyutobor’s penultimate choice to defy the state order without regard for his own life.

The Scythians left their archaeological traces across a good quarter of the Eurasian continent, from the Balkans across Crimea and the Caucasus to Kazakhstan. They also left their genetic traces among human progeny in a broad swathe of the same. In the modern day, the Ossetian people of the Caucasus, who are descended from the Sauromatai tribe of Late Antiquity and the Alan people of the Middle Ages, still speak a language which is descended from Scythian. I do have to wonder a bit if Mosafir consulted at all with these Ossetian neighbours while they were filming this in (relatively) nearby Crimea.

The production values and cinematography in Skif are every bit as polished and lavish as one would come to expect from a modern action flim, though again Mosafir appears to be quite fond of stylistic throwbacks to the silver era of eighties and nineties genre films, action movies and crime thrillers. The palette is washed out with the exceptions of the blood effects, which are always a vivid red. Certain scenes – like the one in which Lyutobor imbibes a psychoactive drink after being captured by a forest tribe and goes berserk – rely on fish-eye lens first-person camerawork and filters to capture the violent psychedelia of the practice: actually, no Western film, but instead the Kazakh films Otyrardyń kúıreýi (with which Skif shares similar thematic material) and Igla come the closest in my experience to these effects. In fact, Mosafir’s portrayal of Lyutobor’s berserkergang – including both the indiscriminate bestial rage during the episode and the extreme physical and emotional weakness of the warrior in dénouement – appears to be remarkably accurate from what historical knowledge of the practice we have.

The action scenes are nicely choreographed, and Mosafir takes delight in favouring us with numerous mobile first person takes to provide a sense of disorientation in combat. The elaborate and outlandish costumes – leather and metal spikes and face-masques galore – and ubiquitous face-paint further entrench the inevitable comparisons with Mad Max, as Mosafir no doubt intended. I will say, however, that some of the CGI blood effects, particularly in Lyutobor’s last confrontation with Qumai and even during the berserkergang, were unintentionally hilarious and came close to having the opposite of the intended effect: this is why I say earlier that Mosafir is playing on the ragged edge of the Tarantino threshold. The musical score is eclectic: a mixture of traditional symphonic accompaniment, ethnic drumming and instrumentation including some khöömi throat-singing, and a bit of modern darkwave dance music (during the end credits). The soundtrack is excellent in that it is suitably subdued, and supports the action rather than distracts from it.

This film is entirely watchable and entertaining as a popcorn action thriller. It’s well-paced, is visually lush, has solid dramatic tension and a decent emotional core. At the same time, I note with some dismay, many of these new movies from modern Russian directors – both in the ‘mainstream’ like this one and in the art-house circuit like Fedorchenko’s ethnofuturist dramas – are soused in a double faith, a dvoeverie, that self-alienates them from the native strength of the Orthodox Christian belief. I’m not entirely sure what is driving this. In Mosafir’s case, I wonder – both from Begletsy and from this film – if he feels that Orthodoxy in Russia has something opportunistic about it, something too close to the amoral logic of princely power.