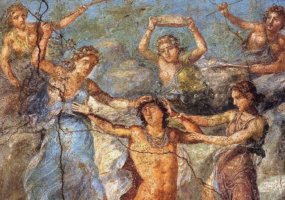 René Girard’s mimetic theory has described how mimesis leads to collective violence. His readings of Greek and Shakespearean tragedy argue that tragedy reveals the origins of violent mimesis in its own mimetic representations. In tragedy, the dramatic representation becomes definitively “tragic” (thereby shaping our subsequent meaning of the word) because what is represented is that there are no alternatives to violence.

But does tragedy only mean we are fated to surrender to the inescapably violent logic of the world? Must we ourselves inevitably degenerate into conflict whenever we oppose injustices that we seek to eradicate? In Greek mythology, the tragic inevitability of such violence is symbolized by the Dionysian cult, which used carefully controlled sacrificial violence in its rituals in order to avoid the spread of violence into wider social disorder.

As it is portrayed in Euripides’ tragedy Bacchae, the Dionysian may be destructive beyond the bounds of its controlled ritual confines, if someone like the tragic hero Pentheus is so foolish as to think that this need for violence can be subjected to rational scrutiny and control. Euripides shows that Dionysus cannot be denied. If he is, then he returns in terrible, violent form, and the lesson he teaches is that, if we try to eliminate his disorder, he will bring greater chaos. But it must be admitted that Euripides’ treatment of this theme is highly self-conscious. It is therefore an ironical way of questioning the violent truth about humanity’s ritual needs.

Girard’s mimetic theory claims to describe how mimesis leads to collective violence. Girard does not see mimetic violence everywhere. It erupts only when mimetic rivalry reaches a certain point of no return. Girard makes it clear that he chose the term “mimesis” for a very good reason. The term “imitation” carries no connotations of the rivalry, or potential rivalry, inherent in all our copycat behavior. Mimesis, however, is to be thought of as fundamentally acquisitive and appropriative, hence conflictual: this is Girard’s agonistic thinking.[1]

The imitator becomes the imitator of his imitator, the model the model of his own model. Each pushes aside the obstacles the other places in his path and, from this, violence is generated. Violence is thus generated by the process of mimetic rivalry. From a legal or psychological viewpoint, we tend to look for some original violence (he started it) or at least for well-defined acts of violence (he hit me first) to be separated from non-violent behavior. We want to distinguish the culpable from the innocent. Hence we inevitably substitute discontinuities and differences for what is most characteristic of a process of mimetic rivalry: the symmetrical continuities and reciprocities of a mimetic escalation.[2]

Dramatic enactment offers us the most exquisite artistic mirror in which we can see the ugly truth about our own acquisitive mimesis and its concomitant mimetic rivalries. The appeal and fascination of drama increases the more mimetic it is of this process. Beginning screenwriters, for example, are told that a scene in which there is a disjunction between what characters say and what they do is far more interesting than one in which there is no psychological divide between words and actions. Imagine two characters professing their love for one another; now imagine them denying it, while we know the opposite to be their true feelings; which scene would be more interesting?

Thus, it is always the mimetic subtext that speaks volumes. The joy we derive from inferring it is the larger portion of our pleasure in viewing dramatic enactments. But while it is easy enough to enjoy and to be fascinated by great drama, it is harder to come to a fully conscious awareness of the mimetic processes enacted in it. Girard maintains that the great masterpieces of Western literature are “more mimetic” than the others (that are not so great).[3] His readings of Greek and Shakespearean tragedy argue that tragedy reveals the process of mimetic rivalry, in its mimetic representations of our all-too human behavior: sadly (and all-too often) we reach the point of no return in mimesis. Then violence enters.

In tragedy, the dramatic representation is tragic because what is represented is that there are apparently no this-worldly alternatives to violence. There is only violent reciprocity. In this regard, characteristic of tragedy is the doubling of its characters. That is, we see dramatized their reciprocal exchanges. The adversaries match blow for blow, or word for word. This symmetry of tragedy is best mirrored in its stichomythia dialogue, where the protagonists trade alternating lines.[4]

Violence not uncommonly results from such a process. Examine your own inner feelings the next time you are trapped in the senseless reciprocity of a stichomythia-style argument. It may be any heated quarrel with anyone else. Ask yourself where the potential for violence lies. Is it not in the frustrating erasure of difference, the perfect reciprocity of the exchange? You may think there is a difference. You may think you are right, and your interlocutor wrong. You may be quite willing to respect difference, the difference of opinion of the other. But your willingness takes this form: your interlocutor is entitled to his deluded opinion; and you are quite entitled to your own peculiar difference: namely, to being right. Is it not always ever thus?

But to any observer not caught up in the contagious mimetic escalation between you and your interlocutor, the meaning of the stichomythia form is clear. You two are quarreling; and it always takes two to do so. It is a reciprocal process, and despite the necessity of adjudicating blame at some point in order to de-escalate, violence is not as easily separated from nonviolence in the way that we can separate the culpable from the innocent. When mimesis turns violent, it reciprocally erases any differences, creating a true crisis of undifferentiation.

Thus the mere denial or exhibition of difference is not the cause of violence, according to Girard. It is rather a formal symptom of incipient violence, headed towards total annihilation. When an exchange becomes violent, it is formally two people fighting, no matter who is right and who is wrong. Girard finds in Greek tragedy the most profound portrayal of this truth about the sad result of mimetic escalation. Unlike mythology, where the good guys and bad guys are (more or less) clearly demarcated, tragedy specializes in the reciprocal exchanges (like stichomythia) that are always so dramatically effective. They are highly effective because of the implicit, dramatic threat they contain: namely, that the stichomythia always threatens to spiral into annihilating violence. In the reciprocal exchange of heated one-liners, the lines of guilt and innocence are blurred. In the reciprocal exchange, we see the hero is not all good, but flawed too. We see his potential demise, and understand it as part of the logic of the whole violent process being depicted, a logic fatefully and symmetrically working itself out.

It seems, then, that perhaps the best way to read the signs of our violent times, without surrender to its conflictual logic, is to attend to reading the best literature. Girard is convinced that the best literature is ultimately the most mimetic. We are invited to test his thesis and to read the Great Books for ourselves. What mimesis do we find mirrored in them? Can we ourselves, through this experience of the best that has been thought and written, come to learn how to be observers that will not surrender to heated reciprocity? If the name “liberal arts” is etymologically true, then it is precisely this sort of education by which we acquire an inner freedom to abstain from conflict and revenge. We can be freed, by our education, to extend mercy and forgiveness instead.

Once liberated, we can without surrender make a careful observation of the signs of the times. All because we learned how to do a careful reading in the first place, thanks to our study of the Great Books.

[2] This entire paragraph very closely paraphrases the account in The Girard Reader, “Mimesis and Violence,” 9.

This was originally published with the same title in The Imaginative Conservative on September 10, 2015.

The Man Who Read The O.E.D.