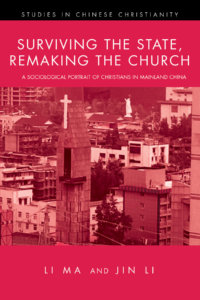 For people whose country is known for censorship and self-censorship, writing in a foreign language is like taking refuge in a free country. For the author of this review and those of the new book that this review is about, English is not their native tongue. What the book, Surviving the State, Remaking the Church: A Sociological Portrait of Christians in Mainland China, deals with largely happened in the Chinese mainland since 1949. But this part of China’s history has basically not been known over the country’s state-controlled media and official publications. It has mostly been kept in private spheres of China’s mainland or partly covered by the media and publications outside the mainland.[1] So it has usually been alien to the Chinese general public.

With the spread of smartphones and the rise of “house churches” or non-state-run Christian churches in the Chinese mainland over the recent years, this part of China’s history is beginning to be known in some parts of the Chinese general public thanks to the independent new media and their writers. And some native Chinese are starting to write on this part of China’s history in English for the international audience. Li Ma and her husband Jin Li are two of them. Surviving the State, Remaking the Church, published by Wipf and Stock in December 2017, is their first book.

By sharing stories of numerous Chinese Christians in different cities of China the authors interviewed between 2010 and 2015, the book mainly explores how the non-state-run Chinese Protestant churches and their members “have coped with life in a hostile regime” and how they “have been reshaped by ripples of social change” during the nearly seven decades since the founding of the People’s Republic of China (xv, 175).

For anyone who is not familiar with the history the book covers, the personal journey of the authors themselves could serve as a guide to why this part of China’s history is worthy of attention. Both Li Ma and Jin Li were born in China’s mainland after the ruling Communist Party initiated the reform and opening-up policy in 1978 following the catastrophic Cultural Revolution and its previous disastrous communist and nationalist movements. Like many of their generation, they received state-sponsored education from primary school through university. Like some of their contemporaries, they went on to study abroad. Li Ma earned her doctorate in sociology at Cornell University in 2010. She is currently a Research Fellow at the Paul B. Henry Institute for the Study of Christianity and Politics at Calvin College in Grand Rapids, Michigan. Jin Li, originally an economic historian by training, is doing his research as a PhD student at Calvin Theological Seminary.

That the young couple devoted their first book-length work to the neglected narrative history of Christianity since 1949 is significantly due to the fact that they are both Christians and scholars. Before their arrival in Grand Rapids in 2012, they attended non-state-run churches in Shanghai. They became Christians during their undergraduate or postgraduate studies. Their conversions and their subsequent researches in America on Christianity are part of the wider phenomenon among the younger generation of Chinese intellectuals where many are exposed to and attracted by the Christian faith over the recent years.

The emergence of Chinese scholars with the background of non-state-run churches is helping change the situation where the Christian perspectives of the Chinese and world history have broadly been absent in the memories of China’s general public. For Ma and Li, it is not just about recovering the history of Christians in contemporary China but also about how Christian revelation and Christian faith can help people of various backgrounds in China to restore the reality and meaning of life.

Both censorship and self-censorship have been common throughout the history of China and elsewhere around the globe. This phenomenon has led to the deliberate deletion of memories among the general public about many aspects of life in history. It seems understandably beneficial for those who would like the specific part of history to be erased from the living memories. However for those who are hurt by such removal, the seeds of bitterness would easily be sowed. The general public who feel not directly affected by the obliteration would naturally get used to being silent. Generation after generation, people would be sealed in the memories of history, much manipulated by those who are able to influence the official media, publications and education.

In the case of contemporary China, episodes like June Fourth Incident or Tienanmen Square Crackdown of 1989 are political taboos. Many of the younger generation in China’s mainland do not know what these events are or simply are unaware of their existence if he or she does not take the initiative of going to alternative sources for information. For the older generation in the mainland, these events are not totally forgotten but mostly remembered in private. One consequence is, that, in the words of Ma and Li, “the average Chinese person today is haunted by a sense of anxiety about his or her identity. When one’s memory about true historical events is first erased and then re-explained by political ideologies and cultural narratives, it produces a passive dissonance and resistance in the form of nihilism or cynicism” (177).

But a further consequence is that, many people were compelled to begin their spiritual quest for the reality and meaning of life after these events, which contributed to them losing faith in the official beliefs. Some of them became Christians. This is a subtle and yet significant phenomenon in China’s mainland and among overseas Chinese in the decades after 1989. It has contributed considerably to the rise of non-state-run urban churches in the age of massive urbanization and marketization, over which  the party-state maintains much control and influence. In their book, Ma and Li record this fragment of history by interviewing people of different backgrounds who experienced conversions during this period of time.

A key change for them is that the divine revelation through Christ helped them to see an authority higher than any person, party or government here on the earth. In other words, Christian revelation freed them from bondage to the reality and meaning of life merely within time. With this new freedom, their hope does not hinge on either any human or the created world but on the one who created both the human and the world.

In a country where the atheist communism is the official ideology and various forms of fast-food culture permeate the daily life, such faith would seem quite an alien concept. However for the people Ma and Li met during their field research, this ostensibly foreign faith was unexpectedly found to be real and intimate. For them, Christianity is not a Western religion. Christian revelation of the death and resurrection of Jesus is not only for people in the West but also for those in the East. Which means, God of the Old and New Testament is for them not just a divinity of a specific culture but the creator, redeemer, and governor of the whole cosmos in reality.

When it comes to China’s censored history, the people Ma and Li interviewed found hope and solace in God’s sovereignty and his promise through Jesus Christ. What one of them told the interviewers is typical of the changes the Christian revelation brought about among them: “After I became a Christian, I started to see things differently. I learned how the Bible viewed injustice. . . . I used to pray for God’s righteous judgment to quickly come upon the evil-doers, but I pray differently now because God is sovereign over all and His timing is perfect. So, I now pray for the oppressor as well as the victims. History will turn its account to God, including the things that were not written in history books, for God Himself knows all history” (43).

The change in attitude toward censored reality comes along with self-reflection as well. Such a realization of one’s own reality under the biblical God is something new and significant for such a Chinese or any human being as this former human rights lawyer who used to easily fault anyone but oneself:

“I thought myself to be a very righteous person, with all the high ideals for democracy and freedom. However, when I was approached by desperate petitioners outside of a local court, I (then a human rights lawyer) pushed them off and ran away. I realized that I had no true righteousness in myself. All I harbored was hatred out of self-righteousness. So I prayed to God for the first time, and I was all tears, crying out aloud, flat on the floor. God turned the earlier pages of my life to show me what I had gone through—all my resentment against parents, teachers and authorities. What kept me alive was not love, but hatred. That experience was a great relief to me spiritually. I laid down my pride and sense of justice as an intellectual before God. He gave me great comfort” (42-43).

In the eyes of Ma and Li, conversions and confessions like this are crucial for people in contemporary China to face one’s own history as well as the history of his or her family, ethnic group and country. The purpose is not simply to reveal the censored past but to shed light on the darkness of life and thus effect a reconciliation not just among people but also between human beings and their creator (178).

Of course, the process of any real reconciliation is never easy. For now, still very few Chinese party-state officials are known to have undergone conversions and confessions like what Ma and Li witnessed. Even among the rising non-state-run Chinese mainland urban churches, the influence of China’s traditional and communist forms of authoritarianism or totalitarianism remains evident. The party-state’s continued censorship keeps house churches and other non-state-run organizations in more or less a closed state. And either in church or in society, people still tend to worship idols, celebrities of various kinds in particular. If history is any guide, given the sinful nature of human beings, the renewal and reconciliation would not be complete anywhere in this temporal world.

But as the book of Ma and Li shows, the non-state-run Christian churches seem to have finally started taking root and producing life-changing effects in China’s broader urban society after Christian missionaries first reached the Celestial Empire more than a thousand years ago. Their book provides far more details about this part of history than what can be presented here. For anyone wishing to make sense of the uncensored reality of contemporary China and the wider world, Ma and Li as both insiders and observers are two professional guides worthy of consultation.

[1] Some of the most recent books partly or specifically examining the history of non-state-run Chinese Christian churches written by native English speakers and published outside China’s mainland include: Ian Johnson, The Souls of China: The Return of Religion After Mao (New York: Pantheon Books, 2017); Brent Fulton, China’s Urban Christians: A Light That Cannot Be Hidden (Eugene, OR: Pickwick Publications, 2015).

Promise Hsu is an Associate Editor of VoegelinView and a Beijing-based independent journalist and scholar. In 2017, he became the founding editor-in-chief of The Kosmos (kosmoschina.org), an independent Chinese quarterly of history and ideas. He was a world affairs journalist at China Central Television’s English News Channel, a member of American Political Science Association, and a visiting scholar at Calvin Theological Seminary. He is author of China’s Quest for Liberty: A Personal History of Freedom (St. Augustine's Press, 2019).

The Invention of Humanity: Equality and Cultural Difference in World History