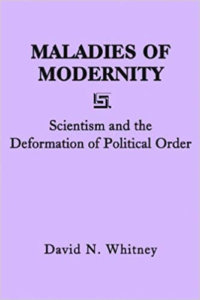 David Whitney’s Maladies of Modernity: Scientism and the Deformation of Political Order is a thoughtful, timely examination of the origins of scientism, and its continued impact on contemporary political science. Whitney traces the origins of scientism to the time of the emergence of modern science in the early Enlightenment. Though science and scientism are not equivalent, they are easily confused by the uninformed and uneducated. Whitney’s book takes the reader through the various stages of the development and promulgation of scientism, beginning with Francis Bacon (1561-1626) and ending in the present with a call for a reformed science of politics that restores contemplation and philosophical inquiry to its rightful place. While I strongly disagree with Whitney’s characterization of Bacon’s thought, it is a pleasurable disagreement, as with a well-written and well-reasoned interlocutor. The book asks all of the right questions, and, even if a reader disagrees with Whitney’s answers to these questions, the resulting conversation is essential to the preservation of the human good.

Whitney’s book begins with a needed distinction between science and scientism. In modern society, science and politics are necessarily entwined. Modern science and technology impact every aspect of our lives, meaning that effective politics will have to account for how people live in a scientific society. As Whitney notes, some of the most important questions of contemporary political life are: “Should governments control scientific research agendas? Should they determine what inventions to allow? And if so, how can such determinations be made? Who ultimately decides if a scientific advancement is good or bad for society?”[1] These questions are especially urgent in the 21st century. Citizens no longer merely have to worry about the existential threat of nuclear warfare; now, we must also accept that ubiquitous, everyday technologies have effectively eradicated the private/public divide upon which liberal society was founded, and must constantly contend with the looming possibility of genetic engineering and human cloning radically redefining what it means to be human. These threats are, of course, balanced by previously unimaginable advances in the length, comfort, and security of modern human life. As much as I fear the effects/consequences of human cloning, I would be reluctant (if not unwilling) to return to a society without modern medicine or electricity.

The relationship between science and politics is further complicated, as Whitney argues, by the place of honor that the idea of science holds in the minds of the public. Citizens do not just want politics to govern science, they want politics itself to be scientific. Science is deemed more reliable, and more objective, than the traditional foundation of politics: reasoned debate, or noesis. Because human beings operate in the realm of opinion, the process of determining which conflicting opinion is wiser than the other is a messy, difficult process with sometimes disastrous results. Eager to avoid the pitfalls of human fallibility, in the modern era students and practitioners of politics have attempted to craft a science of politics, or political science. As Whitney notes, “any claim can be bolstered exponentially if it can be labeled “scientific.”

Conversely, any claim that is seen as “unscientific” can readily be dismissed.”[2] This elevation of the scientific label would not necessarily be problematic if science were adequately understood by those who venerate it. This is not, however, the current state of our society. Practitioners of political science often fail to interrogate their own presuppositions, rendering their “scientific” findings specious at best. At the same time, the public who craves scientific solutions to political problems often has little collective understanding of the methodology employed by the studies they cite, and no ability to judge whether or not the study was executed according to rigorous scientific principles. It is problematic that the average person is dependent on technologies that he or she does not understand; it is deeply dangerous that the average person would be willing to organize our political society based on “scientific” studies that he or she does not understand. This willingness, to accept and elevate any finding that attaches itself to the term “science” is the basis of scientism.

The one serious area of disagreement that I have with this book is Whitney’s alignment with the view that Francis Bacon is the originator of scientism. My own analysis of Bacon’s political philosophy is documented extensively elsewhere.[3] Suffice it to say, I deeply object to Whitney’s contention that Bacon “fails to account for politics”[4] in his vision for modernity. At the heart of our disagreement is the question of whether Bacon is, as Whitney argues, dangerously utopian in his thinking, or if he is, as I argue, as acutely aware of the dangers of his project as he is the potential benefits. Whitney argues that Bacon’s New Atlantis is meant to be a utopian portrait of science in action. I argue, on the other hand, that the New Atlantis shows exactly why and how science untempered by political philosophy leads to tyranny. After all, Bacon plainly warns in the Novum Organum of the danger inherent in his philosophy, due to mankind’s “premature and precipitate haste” in trying to use the fruits of inductive experiment to reach general principles. Moreover, Whitney views Bacon’s wholehearted rejection of the Schoolmen, who turned the study of ancient and medieval philosophy into a diminished, cloistered experiment in tedium, as a rejection of the ancient and medieval thinkers themselves. Careful readers must, however, endeavor to separate the thinker from his or her interpreters. Bacon finds ancient and medieval thought inadequate for his project, but he does not find it irrelevant.

Other than Whitney’s treatment of Francis Bacon, his argument is compelling and well-reasoned. The remainder of the book is devoted to the emergence, and quick corruption, of modern political science. A quick treatment of Bacon’s legacy in the Newtonian Age sets the stage for the meat of Whitney’s argument, which traces the rise of scientism in the thought of August Comte and the French Encyclopedists, such as Saint-Simon, D’Alembert, Diderot, and Turgot, who all sought to hasten the arrival of a scientifically governed society through the application of the principles of natural science onto political and social science. Comte, however, took this ambition even further, developing what he termed the Religion of Humanity. As Whitney argues, “Just as the new science had replaced the old through empirical verification, so too would…’demonstrable’ religion… supplant the ‘revealed’ religion of Christianity.”[5] Whitney’s analysis of Comte is thoughtful, detailed, and very good at teasing out the later implications of his ideas.

This analysis continues through the next few chapters, as Whitney outlines the culmination of the dangers of scientism in the emergence of Marxism and social Darwinism in the 19th-20th centuries. The book does an admirable job showing how faulty science laid the foundation for many of the more heinous policies of these movements, particularly eugenics. Scientism prevents moderns from taking seriously the wisdom of ancient and medieval thinkers. The wisdom of Plato, Aristotle, Augustine, Alfarabi, and others is deemed “unscientific” and therefore irrelevant to the concerns of our modern, scientific society. As a result, modern political scientists are woefully underequipped, not just to make an argument for the best regime, but to recognize when a good regime is teetering on the brink of tyranny, and offer correctives to the danger.[6]

Of course, as Whitney demonstrates, all hope is not lost. The legacy of ancient wisdom has been preserved by thinkers such as Leo Strauss and Eric Voegelin, amongst others. The way forward cannot be a simple rejection of modernity or modern science. Instead, we must find a way to develop a true political science, one that combines the wisdom of the past with the potential of the future. As Whitney argues, political science must foster phronesis, or practical wisdom, a task that “requires an understanding of right and wrong and of justice: knowledge that is ultimately gained through the faculty of noesis.”[7] In conclusion, Maladies of Modernity is well worth the time of anyone interested in questions about the proper relationship between science and politics, and between ancient and modern political thought. And, as should be clear at this point, anyone aspiring to good citizenship in a modern society must take an active interest in these questions. These questions do not have simple or easy answers. In fact, consensus on these questions is likely impossible. That is what makes the discussion itself so essential.

Please see Scott Robinson’s review and an excerpt from the book.