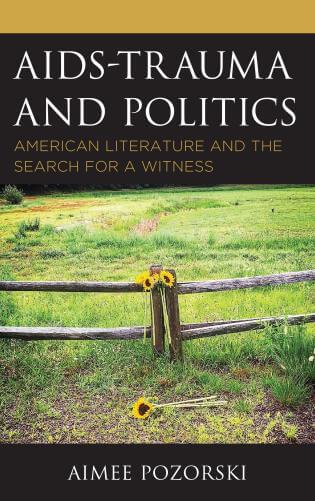 AIDS-Trauma and Politics: American Literature and the Search for a Witness. Aimee Pozorski. Lanham: Lexington Books, 2019.


Aimee Pozorski’s AIDS-Trauma and Politics: American Literature and the Search for a Witness is a beautifully written examination of some of the best-known works of American literature featuring a central character living with HIV or AIDS. The response of the American government and the American public in the 1980s to the AIDS crisis remains a shameful, and relatively understudied, period in American political discourse. Pozorski aims to (partially) rectify this gap through analysis of the ways in which “literary language creates a face for a victim, a face from which one cannot turn away (Pozorski, 4). At the heart of Pozorski’s project is the idea that, even if it is too late to help those who suffered and died during the initial years of the crisis, bearing witness to the tragedy through literature can help mitigate the trauma that remains, and bring the continuing struggle against the spread of HIV/AIDS to the forefront of the public mind.

The first few chapters of AIDS-Trauma and Politics examine the portrayal of the AIDS crisis in poetry, as well as ongoing intellectual and artistic debates about what imagery and metaphors are best suited to capture the reality of those living with the disease. These chapters are very interesting, particularly the discussion in Chapter 3: “Metaphor, Militancy, and AIDS in Susan Sontag and Paul Monette” about the wisdom of using military language such as “battle” and “waging war” in reference to those living with AIDS and those searching for a cure. These chapters are very good examples of literary criticism, and the political discussion is present in the background, but I do wish that more was done to bring it to the foreground. Pozorski is very good at placing the literature she examines into the context of trauma theory, but I would have appreciated a clearer picture of the political situation of the 1980s regarding the response to the emergence of AIDS. While any informed reader can be expected to know the broad context of the Reagan administration’s (lack of) response to the AIDS crisis, for readers who came of age after the 1980s, more detail about the awareness and response to AIDS at the local and state level (or even in mainstream public discourse) would be helpful.

The next two chapters in the book analyze probably the two best-known works of AIDS literature: Tony Kushner’s Angels in America, and Larry Kramer’s The Normal Heart. These are, in my opinion, the strongest chapters in the book, partially because they do engage explicitly with the political conflict of the time. These chapters offer both literary analysis of the two plays, and a thoughtful discussion of the contrasting rhetorical styles of Kushner and Kramer in their attempts to draw attention to the mounting crisis. Kushner’s Angels in America focuses, among other things, on the way that survivors come together to form new families of support in the wake of tragedy. It is a heartbreaking, yet ultimately hopeful, testimony to the resilience of the human spirit. Kramer’s The Normal Heart is much more confrontational in its approach, forcing its presumably mainstream audience with their own failure to forcefully insist on the initial outbreak of AIDS being treated like the public health crisis it was. In possibly the strongest section of the book, Kramer’s work, with its brash, adversarial approach, is contrasted with the powerful silence of the AIDS Quilt.

The next chapter, Chapter 7: “American High: AIDS Fiction, Drug Use, and NYC Activism” discusses two novels, Schulman’s People in Trouble, and Henderson’s Ten Thousand Saints. While the other works included by Pozorski primarily focus on AIDS as a disease passed through homosexual sex, these novels more closely examine the connection between AIDS and intravenous drug use. The authors, Schulman and Henderson, both argue that the perception of AIDS as a disease that only affects “undesirable” elements in society has exacerbated the crisis, and delayed much needed funding, both in terms of healthcare and research. Pozorski’s final chapter, Ch. 8: “Unspeakable Things: Poetic Ethics and Silence in Contemporary American Short Stories” focuses on contemporary art and literature. Pozorski again argues that, even if literature has no power to cure AIDS or alleviate the physical suffering of those living with the disease, it is essential that artists continue to bear witness to the ongoing struggle.

AIDS-Trauma and Politics is not without fault. As Pozorski herself points out in her Afterword, the works she has chosen to include are all from white artists, which leads to a lack of perspective on how AIDS has affected communities of color, particularly African-Americans. And, as mentioned earlier, the book would benefit from a more robust, detailed portrait of the political discourse and public response in the initial years of the outbreak. That said, AIDS-Trauma and Politics is an engaging and thoughtful look at an under-examined area of political literature. I would recommend it for students and scholars of political theory.

Also available is Frankie Mastrangelo’s review and an excerpt of the book.